A graduate of Columbia College, the University of Oxford, and Yale Law School, Shrier lives in LA and is a mother.

Supportive of those with transgenderism who transition as adults, she naturally decries  anti-transgender discrimination of any kind. She writes here exclusively of the trans phenomenon of “rapid onset gender dysphoria” as it affects teenage girls.

The statistics are staggering. A decade ago, the Diagnostic and Statistical Manual (DSM-5) reported an expected incidence of gender dysphoria for natal females, based on those who sought medical intervention, at .002% to .003% of the population.

In the last decade, the incidence has increased by 1,000%. In Britain, the increase is 4,000%. Puberty blockers, testosterone, and surgery, all with irreversible effects, are now routinely administered, based largely on the subjective feeling of the teen in question that she was born into the wrong body.

“The children lead the way” is the ethos. Some teens threaten to commit suicide if their demands aren’t met, and thus withholding of consent has come culturally to be considered an act of violence.

Asking questions about such a sudden and startling phenomenon is responsible, reasonable, and sane. A sense of bewilderment — how? Why? — is the cry of the heart of any marginally sensitive human being.

But cries of the heart, in case you haven’t noticed, have been banned in this culture. Language, belief, and thought are regulated by the woke. 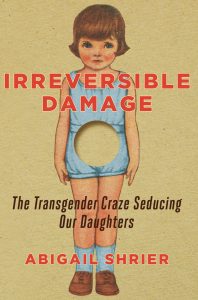 To express the slightest concern with this state of affairs is to court the terror of the online lynch mob and career annihilation. After simply mentioning the book in one of its promotional mailings, the American Booksellers Association, under pressure from “gender supremacists” as they’ve been dubbed, issued a groveling apology and promptly switched their Twitter account to private.

“This is a serious, violent incident that goes against ABA’s ends policies, values, and everything we believe and support. It is inexcusable,” the trade group tweeted. “Apologies are not enough.”

But sales for the book have exploded. Scrolling through some of the 4,000-plus Amazon comments is instructive. Many 5-star reviews are from gay or trans adults who are themselves appalled by the notion that human biological sex is a social construct, and by the relentless promotion of hormones and surgery upon young girls.

The more extreme the treatment, the greater the approval and support from the transgender community. Through their schools, teens in California and other states can begin medically “transitioning” with neither the consent nor knowledge of their parents.

John Hopkins University distinguished professor of psychiatry and behavioral sciences Paul McHugh believes the eventual, inevitable lawsuits will ring the death knell of teenage girl transgenderism. Some of these girls, he predicts, “will wake up at age 23, 24, and say, ‘Here I am. I’ve got a five-o’clock shadow, I’m mutilated and I’m sterile, and I’m not what I ought to be. How did this happen?’”

But in the meantime: how did we get here in the first place? How did we get to the point that young girls are so repulsed by their changing bodies, so horrified by the prospect of womanhood, so divorced from their deepest identity that they are willing to take testosterone, bind their breasts, reject their families, undergo double mastectomies, and in many cases effectively render themselves sterile, before they’ve even had a romantic relationship?

To that end, the most interesting passage in the book may be where Shrier observes that we women have ourselves repudiated what is best in us. While professing to despise men, we have measured ourselves against them.

My own gloss: Women, so the woke ideology runs, are now no longer needed to bear, raise, foster, and guide new life. We are thus ever more superfluous and bothersome, with our hysterical desire for privacy, our annoying delicacy, our pathetic piping cry that a level playing field for, say, girls’ high school sports would naturally exclude biological males.

Is it any wonder that self-harm and suicide rates among teenage girls are skyrocketing? We have lost sight, we humans, of what we are, who we are, who we were made for.

In “No Man is an Island,” Thomas Merton wrote:

“Suffering and the consecration it demands, cannot be understood perfectly outside the context of baptism. For baptism, in giving us our identity [emphasis mine], gives us a divine vocation to find ourselves in Christ. It gives us our identity in Christ. But both the grace and the character of baptism give our souls a spiritual conformity to Christ in his suffering. For baptism is the application to our souls of the Passion of Christ.”