Artist James Castle (1899-1977) was born to a large Irish Catholic family in rural Idaho. His parents farmed and served as postmasters in Garden Valley. Profoundly deaf since birth, he attended the Idaho State School for the Deaf and Blind for five years, but learned neither to read, lip read, nor sign.

He also left behind an astonishing body of work estimated to run between 5,000 and 20,000 pieces. Falling into three main categories — drawings, assemblages, and handmade books and text pieces using letters, numbers, and characters, many self-invented — Castle’s is possibly the largest existing oeuvre for a single artist.

Almost as astonishing as Castle’s output and sophistication was that his family, also from the start, respected, honored, and accommodated his vocation.

To a person they agreed that Jim was never much on chores, nor did they require him to be.

The family moved twice — first to Star in 1923, then to the outskirts of Boise in 1931. Castle had no contact with the “art world,” no mentor, no formal education beyond those five years.

He reportedly had three basic hand signals: “go,” “eat,” and “love,” the last of which consisted in placing his hand over his heart.

With those, and his evidently vast intelligence and imagination, he taught himself: painting, perspective, construction. He made his own “ink” from soot and spit. With scrap paper and cardboard, dime-store watercolors, home-made paste, scissors, and twine, he created a world — an empire.

He worked all day, every day, for close to 70 years. He was still drawing on his deathbed.

Commentators describe him as having a “mission.” But to me what Castle had was a vocation upon which, from the start, he was crystal clear.

He was affectionate and curious, a creature of routine with a stubborn streak when it came to his work. “He had his set way of life, no doubt about it,” a relative observed, an almost monastic way ordered to work and his own private form of meditation.

Each morning he rose early, ate breakfast, retrieved from the kitchen counter fresh materials that his sister Peggy had left out for him: advertising circulars, empty matchboxes, egg cartons, and began his workday.

At the same time, he clearly saw his work as a means of communicating, and was eager to show his drawings and assemblages. (The handmade books and text pieces, which perhaps were for him a kind of private “journal,” he kept to himself).

When visitors arrived he ran to the car to touch them on the shoulder or hand and offer his newest creation. If the visitor failed to respond — he was a keen observer of body language — he would never share with that person again. Rightly so! Cast not thy pearls before swine.

He was more interested in depicting the way things are constructed — rooms, houses, farm buildings — than in nature or people. Captivated by clothing, he often made cardboard figures with dresses, jackets, and hats, lavishing special care on lapels and buttons.

He sometimes veered toward the surreal, for example, drawing block-shaped people with television sets or cat’s heads for faces. One startling piece, a color wash watercolor, features a bewildered-looking woman in an armchair regarding a giant bottle of milk. But his work was never cynical nor shallow nor self-consciously arty.

He seems to have loved the world, quested to understand the world, and had a vast sense of humor about the world. 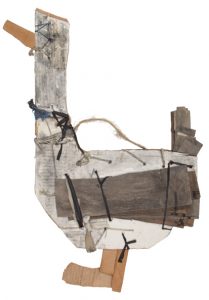 His assemblage of a duck, made from corrugated cardboard, cream card, denim and cloth strips, ribbon, twine, string, soot wash, and purple and black crayon, somehow manages to reduce duckness to its essence: dignified, inscrutable, and slightly, mysteriously, absurd.

Art curator Ann Percy, author of “James Castle: A Retrospective,” observes that his work “was a creation of his own remarkable mind, a mind that was always occupied, always curious, probing and analytical, persistently seeking visual solutions to fundamental questions concerning the structure of things, the ordering of serial imagery, the nature of language, and the borders between the animate and the inanimate.”

The first exhibit of his art was held at the Museum Art School in Portland, Oregon, in 1951. The family was eventually able to buy him a Cozy Cottage prefab trailer, which he used as a studio and delighted him no end. He would join in the family gatherings, then walk the few yards over to his own place and, every inch the proud homeowner, sit on a lawn chair in his overalls and smoke.

He was fully “discovered” only posthumously, in the 1990s, in large part through the efforts of his nephew Robert Beach. His work is now studied, admired, and purchased by museum curators, gallery owners, and art lovers the world over.

In “James Castle: Portrait of an Artist,” an hour-long documentary by Jeffrey Wolf, poet and art critic John Yau observes: “On some deep fundamental way he was aware that he was isolated from all other human beings. But I think it’s not an isolation in a way that’s romantic, but in a way that’s fundamental. His isolation was a truth that we all embody, but to some degree that we are able to deny.”