Chimeras, Richard Dawkins, and the ‘madness’ of Catholicism

Within days of each other, the Salk Institute in California announced it had successfully implanted human stem cells into a monkey embryo, and Richard Dawkins, the renowned evolutionary biologist and professional atheist, characterized the Catholic belief in the Real Presence as ridiculous. He went as far as couching his dim opinion of the Real Presence in Shakespearean terms: “That way madness lies.”

The experiment on monkey embryos and human cells — which seems more at home in a black and white B-grade science fiction movie of the 1950s — and the pronouncement against the fulcrum of Catholic teaching are different forms of the same attack. I realize “attack” is a strong word, but if one does not understand he is under attack, he is not prepared to defend himself.

"Roman Catholics are required to believe that Communion wine actually is literally the blood of Christ, and the wafer literally is his body. Not symbolically but literally. Not a metaphor but literally. That way madness lies. At very least it’s a pernicious abuse of language."

Defense of the Real Presence does not need my assistance. The graces I have received from my most recent consumption of it, though, tells me to resist the temptation to go at Richard Dawkins with similar dismissing and cutting words. But thinking I could “argue” or cajole Dawkins into a belief in it is beyond my pay grade.

I can still try to understand Dawkins by placing him within the context of Scripture (something I think he would also reject outright).

The Real Presence was codified at the Last Supper, but the teaching began earlier in the Gospels — and the early returns from the polls were not promising. As usual, Jesus pulls no punches in the sixth chapter of John. His body is real food and his blood real drink. People began to talk.

Soon the murmurs turned into recordable speech. “This is a hard saying, who can listen to it?” (John 6:60). And then the people started to vote — with their feet. They seemed just as sure of the impossibility of what Jesus taught as any degree-wielding modern scientist.

If you have ever seen a YouTube video of Dawkins as he debates people of faith or viewed some of his lectures where he indulges his atheist leanings, you know he does not suffer fools and his contempt for those who rely on “bizarre” rituals or tribal beliefs of the supernatural are all categorized in his personal “fool” phylum.

It would not take extrasensory abilities to predict what Dawkins makes of St. Peter and the other apostles who, although they did not fully understand the Real Presence when they first heard it, believed in Jesus enough to know to stay put.

Dawkins’ “faith” lies elsewhere, in places like the Salt Institute. It would be logical to assume Dawkins sees these men and women as the embodiment of scientific endeavor, traveling wherever science takes them, even if it is a place they should not go. 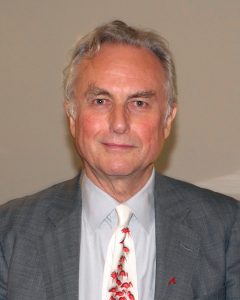 But without God at the center of things, the Salk Institute’s “breakthrough” of inserting human tissue into nonhuman tissue is a natural progression.

The end goal of the Salk Institute experiment is to create a source of human organs for transplant. It sounds as altruistic as it does cannibalistic. Ironically, this circles back to Dawkins and his opinion of the Real Presence. To Dawkins, the Real Presence represents a logical black hole; he insinuates smugly that a Church that forbids cannibalism but celebrates the Real Presence is schizophrenic at the very least.

The difference that Dawkins will not or cannot accept, and that I am not the man to convince him of, is that cannibalism requires dead flesh, and the Real Presence is the living God who avails himself to us in the most intimate and real way.

A successful Salk Institute experiment, on the other hand, is contemporary cannibalism, and the flesh it will be creating under pristine and antiseptic conditions will eventually fail, as all flesh is prone to do.

The Salk scientists call these “hybrid” creations “chimeras.” One of the meanings of chimera is a thing that is hoped for or wished for but in fact is illusory or impossible to achieve.

Is the Real Presence easy to understand? I think we all have a lot more in common with both first-century doubters and modern-day evolutionary biologists than we may be willing to admit. And I have been taking it for granted, so thank you, Dawkins, for the challenge to make me look in the mirror (and open my Bible).

If Jesus meant what he said and said what he meant, then we know the Real Presence is no chimera, but rather supernatural evidence that with God, nothing is impossible.