When Joe Biden was finally announced as the president-elect (which technically he isn’t until after the electoral college votes) on Nov. 5, there was a report that London’s night sky erupted into a cascade of fireworks and wild celebration. Social media exploded with the news as proof that the world’s imprimatur had been assigned to the American voting public’s alleged decision at the ballot box.

But when the smoke cleared, it was apparent the incident over the skies of London was not so much “fake” news, but rather just another example of the modern phenomena of information traveling at a different speed than the context of the same event.

Context is everything. Without it, biblical scholarship would be worthless. Historical research already suffers from information not seasoned with the proper amounts of context. Context is the salve that helps us with perspective. Sadly, due to the rapid-fire internet news cycle and the social media beast, there just doesn’t seem to be much time for it now.

When the truth of London’s fireworks caught up to social media, it was too late. All of the online amateur news directors with their blogs and Facebook pages were already onto other topics to be wrong about. I am confident if you ask 10 people who even remember last week’s news why the people of Great Britain celebrated with fireworks on Nov. 5, 9 1/2 of them would say to celebrate the presumed election of Vice President Joe Biden.

Nov. 5 is Guy Fawkes Day, a day they obviously still celebrate in England, even though the event it commemorates happened in the 17th century.

Guy Fawkes was a Catholic in England in the 1600s — not an easy thing to be. Priests had been ordered out of the country, and for English Catholics, not even second-class citizenship was a faint hope.

Fawkes and his coconspirators hatched an outrageous plan to blow up the House of Parliament and everyone inside of it. Like so many conspiracies, it fell apart, and Fawkes was discovered in a tavern with barrels of gunpowder and some fuses in his pocket. England celebrated. The pathetic conspirators were drawn and quartered, and the country held a day of thanksgiving that there was no loss of life, other than the Catholic conspirators. “Guy Fawkes” slowly evolved into a celebratory day of fireworks and general anti-Catholic bashing. 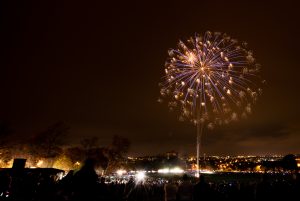 There’s another way this “celebration” is attached to the American presidency, and one a lot more profound than the mistaken connection all those online assignment desks got so wrong. A lot of English customs traveled well across the Atlantic to the colonies. One of them was celebrating Guy Fawkes Day and enjoying some good old-fashioned anti-Catholic mockery with effigies of popes, priests, and nuns tossed on bonfires.

In 1775, George Washington, as the commander in chief of the Continental Army, put a stop to the celebration of Guy Fawkes Day in America. He did this through a direct order from his general headquarters, which read:

“As the Commander in Chief has been apprized of a design form’d for the observance of that ridiculous and childish custom of burning the Effigy of the pope, he cannot help expressing his surprise that there should be Officers and Soldiers in this army so void of common sense, as not to see the impropriety of such a step at this Juncture.”

George Washington performed other acts of religious tolerance both as the general of the Continental Army and as president of the United States. The “context” he was dealing with was the pre-conceived, bigoted attitudes of what it meant to be a practicing Catholic or a practicing Jew. That, sadly, is still something we have to deal with in 21st-century America.

Though not officially certified, our last presidential election is over. We will have the second Catholic president in the history of the nation. Yet the woman he chose to be his vice president and the person proverbially “one heartbeat away from the most powerful office in the world,” believes membership in the Knights of Columbus is a potential disqualifier of public office.

George Washington was a trendsetter in a lot of ways. He was the first (and last) man to be in charge of a victorious revolutionary armed force and voluntarily give up that power. We can pray that his precedence of religious tolerance filters through the centuries to the next Catholic president of the United States.