Birds at the basin

I am not a birder but I have a mystical, poetic affinity with birds.

So for my first real foray into the world since COVID-19, I recently made a field trip to the Sepulveda Basin Wildlife Reserve.

Heading out to the San Fernando Valley that day, the thermostat in my car read 108.

The Reserve is in Encino and is part of, but not to be confused with, the Sepulveda Basin Recreation Area, a 2,000-acre flood control basin near the intersection of the 101 and 405 freeways comprising, among other features, two parks, a sports field, an archery range, two 18-hole golf courses, a Japanese garden, Balboa Lake, and the only unpaved stretch of the LA River.

The entrance to the Recreation Area is on Burbank Boulevard, East of Balboa.

The Wildlife Reserve is closer to the 405, off Burbank down Woodley Avenue a half-mile, then another half-mile to the parking lot.

“Follow the trail leading from the ‘stonehenge’ restroom/amphitheatre area south,” the directions run. “You can walk all the way down to the LA River, but if you do (the trail leads through a tunnel under Burbank Boulevard) be sure to go with another person.” 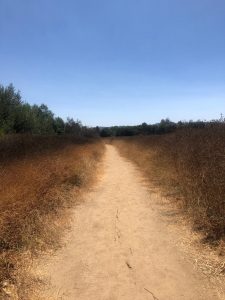 Naturally, I skipped over that last part. I also, at the first sign of open grassland on Woodley, became so excited that I wheeled over, parked, clamped a sunhat on my mind, grabbed my water, and gaily set out on foot vaguely intuiting that I was headed in the right direction.

Interestingly, though the temperature was baking hot, I quickly spotted many young men in shorts vaguely scanning the horizon, weirdly lurking, or huddled with another under the shade of a tree having private conversations. None seemed much interested in wildlife. “Hey guys,” I thought, “why not have your chat in a nice brightly lit, air-conditioned restaurant?”

As I picked my way across the trail, I reviewed what I’d learned online. A wealth of information on the flora, fauna, geography, and history of the area can be found at sepulvedabasinwildlife.org. The site was developed in 1988, enlarged to 110 acres in 1994, and completed in 1999.

The reserve is a happening place. There are Beginning Birds-and-Nature walks, volunteer cleanups of Haskell Creek, and a hotline to rat out violators of the no-drones policy.

Native plants have been installed in various areas with the hope that they will survive and flourish. Trees include the Fremont and black cottonwoods, coast live and valley oaks, California walnut, Western sycamore, and box elder. Shrubs and perennials include a wide spectrum of sages as well as lemonade berry, laurel sumac, prickly pear cactus, and the California blackberry.

Then there are the aquatic plants, and beyond that the panoply of noxious non-native and invasive plants.

The grass was almost head-high, and as I waded through, I was thinking as well about that cautionary: “Be sure to bring another person.” Maybe someone would jump out of the brush with a knife like Maria Goretti’s attacker and I could be martyred in the line of duty while defending my late-life purity!

In fact, I was in the grassy area less than 10 minutes and soon found my way to a southern entrance to the reserve. There was a bit of litter and sadly, many of the display boards had been covered with graffiti. In the distance to the east loomed a bank of corporate headquarters. 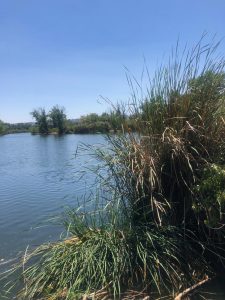 But as I rounded the edge of the 11-acre lake a glassy expanse came into view. And at that exact moment, a giant egret, Transfiguration-white, rose from the shallows and glided majestically across the water. That one heart-stopping glimpse alone was easily worth the whole trip.

I made my way around the perimeter of the lake, about a half-hour walk, sniffing, basking, craning my neck. That whole time, I saw only two other people, what looked like a father and daughter dangling their feet in the water on the opposite shore. Simply being near an expanse of water was heavenly.

As for birding, in springtime “before the cottonwoods leaf” is best here, but any time of year will yield fruit.

Shorebirds come through in later summer; warblers, vireos, and flycatchers in September and October; and ducks, hawks, and sparrows begin arriving in November. The summer breeders begin to leave by mid-August.

The area is known especially for supporting migrating Canada geese and the endangered Bell’s vireo. Rare blue grosbeaks have also been spotted.

A century ago, the valley was open plain, traversed by the LA River. Millions of birds traveling between breeding grounds in Mexico and Central America refreshed themselves in its wetlands.

That today the site is at least partly used for gay cruising and teenage partying is cause for sorrow.

I chose to focus instead on that egret, and on the thousands of caring people obviously required to create, maintain, and catalogue the flora and fauna of this beleaguered but brave site.

I’d explored but a tiny corner of the Sepulveda Basin and hope to return on a cooler day.

A red-tailed hawk, soaring high as I made my way back to the car, waved goodbye.

Pope Francis to Venezuelan clergy: Serve with 'joy and determination' amid pandemic

Saint of the day: Canutus, King of Denmark