ROME – For the second time in a week, the Diocese of Brooklyn went to court Thursday seeking to overturn restrictions imposed by Governor Andrew Cuomo on public worship in areas considered Covid-19 hotspots, as New York along with much of the rest of the US reels from a third wave of new infections.

The diocese originally was denied a temporary restraining order barring the restrictions, and it’s now seeking a preliminary injunction that would have the same effect. Cuomo’s decree limits attendance at religious services to no more than 10 people, something the diocese regards as “ irrational and arbitrary” given that many of its churches have a capacity of several hundred people and can admit far more than 10 while still observing social distance and other safety protocols.

The legal skirmishes in New York come as other bishops around the country also seem to be bristling at Covid-related lockdowns. Recently House Speaker Nancy Pelosi even took a shot at her own archbishop, Salvatore Cordileone of San Francisco, for suggesting that the rights of religious believers are “unjustly repressed” by the city’s total ban on indoor services and its limit of 12 people at outdoor services (which has since been relaxed to 50 people).

By way of comparison, while similar measures have been imposed in Europe, Catholic backlash rarely has come from the bishops.

Last May, France’s High Court overturned a ban on public worship on the grounds that it caused “damage that is seriously and manifestly illegal” and that the measure was “disproportionate to the objective of preserving public health.” The ruling came in response to a challenge brought not by the French bishops, who had instead submitted a series of counter-proposals to the government, but a constellation of traditional Catholic groups and right-wing political forces, such as the Christian Democrat Party, the Society of St. Pius X and the Priestly Fraternity of St. Peter.

When Ireland decided in late September to reimpose worship bans as part of what it calls a “Level 3” coronavirus protocol, there was protest from rank-and-file believers but mostly support, albeit sometimes grudging, from the hierarchy.

Dublin Archbishop Diarmuid Martin issued a statement regarding the restrictions saying, “No matter how they may sadden us, are appropriate at this time.” 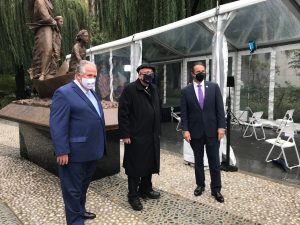 That’s not to say that from time to time, European bishops haven’t voiced displeasure. When Italian Prime Minister failed to include lifting a ban on public worship in his “Phase 2” plan for a gradual reopening of the country in late April, Bishop Giovanni D’Ercole of Ascoli Piceno, a well-known personality in Italy thanks to frequent TV appearances, publicly warned of a budding “dictatorship.”

Yet in general, not only have European prelates declined to go to court to fight church/state battles, for the most part they’ve been supportive of government limits on worship as part of an overall anti-Covid strategy.

How to explain the contrast?

For one thing, given the prevailing secularist mindset in much of Western Europe these days, bishops may be leery of giving courts the opportunity to say out loud that religious worship simply isn’t considered “essential” in a time of crisis, on par with, say, grocery stores, pharmacies and even tobacco shops (which, In Italy, were never shuttered, even when the national quarantine was its peak in March and April.)

In other words, many bishops may feel if they don’t want the answer, they shouldn’t ask the question.

Second, there’s the Pope Francis effect. Above all in Italy, memories are still vivid among the country’s bishops of how they were forced to stand down in late April when it seemed a church/state battle was on the horizon until Francis used his livestreamed daily Mass to demand “obedience” to anti-Covid restrictions.

While that episode may not have registered much in other parts of the world, it sent a clear message to bishops here that the pontiff did not want confrontation. Francis hammered the point home in late June when he called complaints about church closings, mask requirements and social distancing measures “adolescent.”

(Ironically, while Francis has been broadly supportive of government efforts to fight the pandemic, he doesn’t always practice them himself. He rarely wears a mask in public, and he has continued to greet people by shaking hands or giving hugs. Recently the Vatican was compelled to adopt new protocols keeping the pope distanced from the crowd at his public audiences.)

Third, there’s the politics of the situation. It’s well known that on both sides of the Atlantic, skepticism and protest over government restrictions tends to come from the political right, often from the same nationalist and populist currents Pope Francis often critiques, most recently in his new encyclical letter Fratelli Tutti.

In Catholic terms, that means the press to resist Mass bans and other measures tends to stem from the same circles which have been critical of the pope on multiple fronts. In that sense, the lineup of the plaintiffs in the French litigation is emblematic.

As a result, many bishops, again especially in Europe, may be hesitant to cast their lot with figures seen as opposing the boss.

Whatever the explanation, the bottom line is that DiMarzio’s challenge to Cuomo, whatever one makes of its merits, appears unlikely to inspire many imitators in the pope’s own European backyard. For better or worse that train has left the station, and wherever it may be headed, it’s not to court.