National Public Radio’s “All Things Considered” evening news show has a running feature called “Anthems.” It identified various songs from our collective memory that could be so labeled, from “This Land is Your Land,” by Woody Guthrie to “Get Together,” most famously sung by the Youngbloods. Nirvana’s “Smells Like Teen Spirit” even got a nod, described as an “anthem for a generation that didn’t want one."

What makes a song an anthem depends a lot on where you are coming from. “Born in the USA” by Bruce Springsteen had the rather odd fate of being an anthem both for those who sang the refrain with a certain post-war bitterness and those who sang it as the theme song of Ronald Reagan’s presidential reelection campaign.

Anthems are songs that evoke a particular time or a particular emotion in the listener almost as soon as the first notes are heard, binding us to all who share a similar memory. Yet while anthems have the ability to speak to millions, the strings they pluck in each of us can be intensely personal.

The same holds true for church music: I think we all have our personal church “anthems,” songs that can move us to tears or bring back a rush of memories.

If I hear “Hail Holy Queen Enthroned Above,” for example, I am immediately transported back to my grammar school choir at Visitation Church in Westchester, looking down on a sea of bowed heads and veils from our lofty choir perch while trying to follow Sister’s earnest conducting.

In church, singing isn’t entertainment. Whether we belt it out with abandon or simply move our lips as if we are in a Jimmy Fallon lip-sync contest, singing is praying. I’m more the lip-sync type, but there are certain songs that will actually compel me to join in, a sure sign it’s on my anthem list.

For sheer exuberance, “All Creatures of our God and King” is one that will ring the church bells. Attributed to St. Francis of Assisi, it is a soaring, exultant entrance song, rife with alleluias. Yet deeply Franciscan, the sixth verse, for obvious reasons not sung very often, is an ode to Sister Death:

“And you, most kind and gentle death,
Waiting to hush our final breath,
Sing your praises! Alleluia!
You lead to heav’n the child of God,
Where Christ our Lord the way has trod…”

Two ultra-traditional songs that have a solemnity and an elegance that make them classics are “Tantum Ergo” and “Pange Lingua,” both by St. Thomas Aquinas. But for me the “Salve Regina” has a special place because it reminds me of the Night Prayer, or Compline, at Mepkin Abbey.

In a church lit only by candles, it is a final prayer sung before the monks are blessed and sent to bed with the song’s plaintive request: “Grant us after these, our days of lonely exile, the sight of your blest Son and Lord, Christ Jesus." 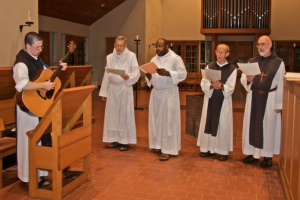 One song that won’t ever make any of the hymnals, but which I find very moving, is Leonard Cohen’s “If It Be Your Will,” particularly the version sung by the singer once known as Antony. It is an artist’s prayer, hauntingly beautiful, and beautifully haunted. Cohen himself described his songs as “muffled prayers,” and that certainly describes this one.

But of all my church anthems, “The Servant Song” is at the top of my list these days. Composed by Richard Gillard, it has a monastic simplicity to it, a Gospel purity that cuts right to the heart of the Christian challenge:

“Brother let me be your servant
Let me be as Christ to you,
Pray that I might have the grace to
Let you be my servant too.”

My regret is that I didn’t know “The Servant Song” when I got married. It is the one song my wife and I both want played at our funerals.

Of course, when it comes to church music, everyone is likely to have an equally fierce idea about what they don’t like: the anti-anthems. My wife has a particularly strong antipathy to “On Eagle’s Wings,” for example.

She has let it be known that if I allow it to be played at her funeral, she will come back from the grave and haunt me. I have a similar feeling about “Gather Us In,” whose cloying verses claim “we have been sung throughout all of hist’ry.” Not at my funeral, anyway.

But instead of complaining about the music we don’t like, or complaining that Catholics can’t sing, or that no good music has been written in the last decades, or centuries, or millennium, let’s acknowledge the new classics and the old — our personal anthems. And the next time we hear it in church, no lip-syncing!