An ode to the ‘ambassador’ of music

“Viva Maestro!”, a 2022 documentary written and directed by Theodore Braun, is a paean to the LA Phil’s own Gustavo Dudamel.

Except he’s not just ours — far from it. He’s the director of the Paris Opera, music director of Venezuela’s Simón Bolívar Symphony Orchestra, and a worldwide ambassador for the unifying, transcendent power of music.

Dudamel, a native of Venezuela, came up in El Sistema, the publicly financed, arts and community-building classical music-education program founded in 1975 by Venezuelan educator, musician, and activist José Antonio Abreu (1939-2018). 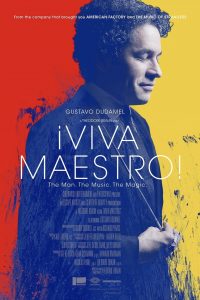 In fact, the documentary is also a paean to Abreu and the electric spirit and sense of responsibility that he passed on to one of his star pupils. Says Dudamel: “Abreu helped me to understand the universe of possibilities and how to use those possibilities to do something special.”

“Wunderkind!” “Conductor of the People!” “Rock Star!” run the headlines.

But for all his charm and charisma, Dudamel is a perpetually restless artist, ever seeking perfection. As he rehearses the Simon Bolivar Orchestra for Beethoven’s “Symphony No. 5,” he appears supremely confident but backstage confides: “It takes me a long time to feel … not comfortable, because comfortable is not good. Tension is good. And I think that [tension] is the secret of the spirit of the piece.”

An interlocutor presses, “Why is the ‘Fifth’ so difficult?

“Because I can’t conduct,” Dudamel responds with a smile, and turns away.

The film follows Dudamel and his various orchestras during 2017 and 2018 — years during which the repressive regime of President Nicolàs Maduro tightened its grip on Venezuelans.

Though heretofore loath to enter the political arena, when violinist Armando Cañizales is killed in the demonstrations by Venezuelan security forces, Dudamel issues a statement: “My entire life has been devoted to music and art as a way of transforming societies. I raise my voice against violence. I raise my voice against any form of repression…I urgently call the President of the Republic…to listen to the voice of the Venezuelan people…Enough is enough.”

“I’m the leader of a program,” he explains. “It’s not just Gustavo. It’s millions of young people.”

He follows up with a New York Times op-ed entitled “A Better Way for Venezuela.” The government is calling for the election “of a national constituent assembly to rewrite the Constitution.

“This is not the answer. All Venezuelan citizens have a duty to do what we can to reverse the current situation, to defend our fundamental democratic values and to prevent more bloodshed.”

Devastated but undeterred, Dudamel organizes an orchestra of kids from Mexico, Canada, the U.S., Argentina, Puerto Rico. He conducts them himself, in Mexico City. “Music is an essential human right, not elitist, nor far away from daily life, but rather an essential part of our growth as human beings.

The musicians’ longing to return to Venezuela is palpable. At a lunch, Dudamel tells them, “Maestro Abreu once quoted Neruda to me: ‘They can cut the flowers. But they can never stop the spring.’ That’s what we’re going through — as a family, a project, as products of El Sistema. You are the root. The root remains when the tree is cut. When I asked the Maestro, ‘What happens after you?’ he replied, ‘The children.’ ”

Dudamel recounts the last telephone conversation he had with Abreu. “I was sharing with him — ‘We were with all the children in Mexico, maestro. Your idea is there. It has spread around the world.’ He was so happy and so touched. ‘Keep me posted,’ he said. He understood that I could not be there [at Abreu’s deathbed]. I regret that I was not there with him. And I will regret that all my life.”

But Dudamel never sits still for long. “I think we need a beautiful combination,” he tells his manager about a concept he’s developed for Chile. “We need to invite musicians from the Simon Bolivar Orchestra, maybe five young members of the Youth Orchestra, from the LA Phil, the Vienna and Berlin Phil. All of them come in to play but also to teach. Because that’s El Sistema.”

Dudamel’s philosophy, work, and life constitute a resounding rebuke to those who maintain that art is a frivolous whim in these dark times.

As he raises his baton in Santiago, Gustavo Dudamel — ours, Venezuela’s, the world’s — proclaims, “All honor and eternal glory to José Antonio Abreu.”

The orchestra launches into Tchaikovsky’s “Symphony No. 4.” The composer attempted suicide while writing it, but you’d never know it from the opening fanfare; the rapt, utterly absorbed faces of the musicians; and the conductor: curls flying, heart on fire, his body a lit fuse of passion.

They can cut the flowers. But they can never stop the spring.