An anti-Disney battle plan for the culture wars

It is yet to be determined what a successful battle plan looks like when it comes to the culture war we find ourselves in. Even the very use of the word “war” sounds harsh and alarmist.

But the recent exposé on what Disney Corporation executives think is appropriate for young children seems to inform anyone paying attention that battle lines have been drawn. 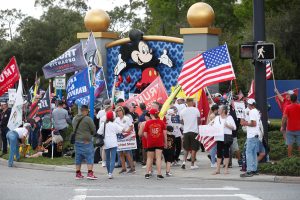 Supporters of Florida's Parental Rights in Education law are seen outside Walt Disney World in Orlando, Fla., April 16, 2022. The law prohibits classroom instruction on sexual orientation and gender identity for students in kindergarten through third grade. The Disney Corp., which opposes the law, and other critics have dubbed it the "Don't Say Gay" law. (CNS photo/Octavio Jones, Reuters)

It will take cool heads and rational brains to “win” this kind of confrontation and frankly, I doubt I have either of those traits in large supply. And many of our first impulses are to strike back when we read about how children are being zeroed in on by a host of agenda-driven agents.

I came upon a culture warrior podcast targeting the same Disney corporation. Many of the multinational money-making behemoth’s indefensible actions were itemized in great detail. He also focused on the Disney animated movie “The Little Mermaid,” which he saw as a kind of Trojan horse of bad things; he was especially contemptuous of the film because the Disney version diverted from the fairy tale’s source material.

I have always taken for granted that Disney gave all of the original fairy tales used as primary source material the “Disney treatment.” I can easily picture the days when animators would sit around Uncle Walt as he told a tale using different voices of the not-yet-animated characters he wanted to transmit from his imagination to their drawing tables. And in the process Disney would edit and alter that source material for a variety of reasons, not necessarily bad ones.

But this culture warrior’s vehemence against the Disney version of “The Little Mermaid” made me turn to its source material, and I spent a few minutes reading the story that was written about 185 years ago by Hans Christian Andersen.

When I finished this simple story written for children by a master craftsman, I felt the same way I did after I read Mary Shelley’s “Frankenstein” for the first time — the original story is stronger, deeper, and more thought-provoking than the movie version. And whereas the novel Frankenstein is more philosophical than any cinematic version of it, Hans Christian Andersen’s “Little Mermaid” is profoundly more spiritual in tone and tenor.

That is not to say the Disney version of “The Little Mermaid” is an abomination. Actually, much of what is in the original finds its way in between the Broadway show tunes in Disney’s film. But even Uncle Walt would have steered clear from the darker and more soul-searching elements Andersen put into his story. 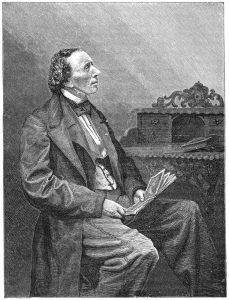 Books and fairy tales are not movies, and very few can be translated onto the screen without some harm being done to an author’s original intent. Movies are collaborative and require lots of editing, financial considerations, and artistic choices. But sometimes, and this is the case of “The Little Mermaid,” a powerful story of what love is really all about is left on the cutting-room floor as a sacrifice to the sensibilities of a post-Christian entertainment industry environment.

The original story of “The Little Mermaid” may seem harsh and make us a little squeamish. But that, I believe, is a function of all of us growing up with the more sanitized and pacified fairy tales, when one man was the sole proprietor of the studio in Burbank and ran his studio like his own private fiefdom.

Walt Disney may have erred on the side of caution with his omissions. The modern Disney decision-makers are making different kinds of errors when they edit out the most profound and important aspect of “The Little Mermaid” that catapults it up toward classic literature.

G.K. Chesterton had pinpointed the necessities of monsters and evil in fairy tales decades before entertainment corporations began sanitizing them: “The baby has known the dragon intimately ever since he had an imagination. What the fairy tale provides for him is a St. George to kill the dragon.”

So there’s a battle plan. Go to the source. Read these incredible stories out loud to your children and grandchildren. If you do that with Hans Christian Andersen’s “Little Mermaid” they will learn that life isn’t about “Letting Go” or “Under the Sea.” It is about being brave and courageous and sacrificing everything for the love of another, which dovetails seamlessly with what the nonfictional Gospels have been telling us for 2,000 years.