In the early 2000s, a prominent European cardinal convened a behind-closed-doors summit of the leading intellectual lights of conservative Catholicism from Europe and the United States. The gist was to discuss how conservative Catholicism – what participants would describe as “orthodoxy” – should meet the challenges of the new century taking shape.

As the discussions unfolded, a stark division became clear between the two sides of the Atlantic over abortion.

The dispute was not over whether abortion is a grave moral evil, with which everyone taking part would readily agree. It was, instead, over what pride of place abortion deserves among the Church’s various priorities.

At the time, European Catholic conservatives were focused on a host of other matters, including a rising tide of Islamic immigration, which they feared might undercut the Christian roots of the continent; runaway secularism, which they feared was shading off into overt hostility to institutional Christianity; and the bureaucratic pretensions of the European Union, which they saw as a threat to distinctive national identity, often with foundations in Christian values.

For the Americans, it seemed clear that while those concerns were important, the primordial issue of the day is the defense of human life, beginning with the struggle against legalized abortion. They compared it to the campaign against slavery in the 19th century, warning that history will judge the Church if it fails to be on the right side of the abortion debate.

This bit of history comes to mind in light of the recent Dobbs v. Jackson decision of the United States Supreme Court, effectively overturning Roe v. Wade. As the long-ago conservative summit illustrates, the contrast in Catholic culture between the two sides of the Atlantic – with abortion front and center among American Catholic concerns, not so much in Europe – isn’t about ideology, but the realities of the political landscape.

In America, prior to Dobbs v. Jackson, the abortion question was never settled democratically but was instead a result of judicial fiat, meaning that the pro-life movement never accepted the legitimacy of the outcome because it seemed foisted upon the country by unelected, and arguably unrepresentative, judges. 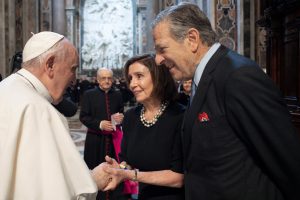 Pope Francis greets U.S. House Speaker Nancy Pelosi, D-Calif., accompanied by her husband, Paul, before Mass on the feast of Sts. Peter and Paul in St. Peter's Basilica at the Vatican June 29. Pelosi made headlines for receiving Communion at the Mass despite her position in support of abortion rights. (CNS photo/Vatican Media via Reuters)

In Europe, on the other hand, there were ferocious political debates over abortion in the 1970s and 80s, which resulted in a new status quo in which abortion would be widely available within certain limits. While pro-lifers across Europe today obviously dissent from that arrangement, they don’t fundamentally question its democratic legitimacy, nor do they harbor many illusions about what would be likely to happen should it come up for a vote again.

In Italy, for example, a law permitting abortion without restrictions during the first 90 days of a pregnancy, and in cases of threats to the life or health of the mother thereafter, was adopted in May 1978 after a contentious parliamentary debate. Known as “Law 194,” it also provides for conscientious objection, so that no health care worker can be compelled to participate in an abortion. (According to some estimates, up to 70 percent of gynecologists in the country decline to perform the procedure.)

Two popular referenda held on May 17, 1981, challenged the new law. One, proposed by Italy’s Radicals and the Communist Party, sought to eliminate all restrictions on abortion, while the other, backed by social conservatives and the Catholic Church, wanted to re-criminalize abortion. The former was shot down by 88 percent of Italian voters, while the other was rejected by 68 percent.

When the dust settled, it seemed clear to Italians that the people had spoken: Abortion would be legal, within certain limits, but no one would be forced to participate. In the forty years since the referenda, the saying la legge 194 non si tocca, “don’t touch the abortion law,” has become a political mantra for left, right and center alike.

So far, there seems little evidence that the landmark ruling in the United States is likely to have much effect in altering these European realities.

In France, the head of President Emmanuel Macron’s party has introduced a bill to enshrine respect for abortion rights into the French constitution, and even the leader of the far-right National Rally party, Marine Le Pen, has said she has no intention of challenging existing abortion laws.

In Italy, Giorgia Meloni, leader of the right-wing Fratelli d’Italia party, said in response to Dobbs v. Jackson that the situation in Italy is “light years removed” from the U.S.

“Here, the voluntary interruption of a pregnancy is permitted not by a court decision, but a law voted on by parliament,” Meloni said, indicating no appetite to challenge that decision.

Her fellow conservative leader, Matteo Salvini of the far-right Lega party, has said that he’s personally pro-life but that “the final word on abortion belongs to women, and no one else.”

Germany, where abortion technically remains illegal but is widely permitted within the first 12 weeks of pregnancy, recently scrapped a Nazi-era law that prohibited doctors from providing details on the abortion procedures they offer. There seems no serious push to change the basic contours of the country’s abortion policy from either side of the political aisle, in part because most polls show it would be a losing proposition.

In the immediate wake of the Dobbs ruling, most short-term forecasts are for tremendous political storms in the United States over abortion, beginning with the midterm elections this fall. Perhaps the lesson of Europe, however, is that such turbulence, however fraught and painful, is the price that must be paid to achieve a rough social consensus down the line.

Perhaps in some future trans-Atlantic Catholic summit, American and European Catholics will find their differences on abortion less pronounced, because, at long last, the democratic system will have had its say in the US as well.