Abortion and the average Joes and Janes

Catholic media is a big tent, and one of those tents I am prone to poke my nose into is a web version of the Catholic magazine First Things. There I find collections of articles on faith and culture I wish I was smart enough to write.

A recent thought-provoking article on this website went deep into the abortion industrial complex as it related to the head of the National Institute of Health. His name is Francis Collins, and under his tenure, the NIH has set spending records in the realm of human fetal research. The article wonders how this man, who personally and publicly identifies as a devout evangelical Christian, navigates his moral compass while championing research that could only exist from the substantial volume of “specimens” made available to it via the abortion industry.

The article is also worth noting because it is written by an educator working within the University of California education system; not a likely location to find someone so comfortable and resolute with Catholic teaching on the issue of life. Now I know what a botanist feels when he finds a species of orchid once believed extinct, flourishing in the Great Amazon Basin.

The article is not for the faint of heart. The kind of research being paid for by your tax dollars and mine is something Mary Wollstonecraft Shelley could not have thought of in her most fevered dream, and she had pretty febrile fantasies.

The NIH, under the guidance of this devout evangelical man, authorized funding of a University of Pittsburgh study on human skin. Sounds benign enough, until I learned the study required the grafting of the scalps of aborted fetuses to the bodies of rats and mice. There was a link to a deeper dive of the University of Pittsburgh study. I took a breath, sprung from the online article’s platform, and dove into the original source material. Now I know what it feels like to jump into a swimming pool and realize in mid-air that the water is too shallow.

I learned the monstrous human scalps on rodents experimentation was only a miniscule part of a $3 million federal funding project to make the University of Pittsburgh a “tissue hub.” The university desires to become an integral distribution center for material and research — all anchored around “harvested” (their word) human fetal tissue ranging from six to 42 weeks. For the record, the average gestation for a human baby is 40 weeks, so what exactly that extra two weeks means is something I don’t want to contemplate.

Their source material drips with chilling turns of phrase like, “All fetal tissue is collected through a collaborative process including Family Planning, Obstetrics and Pathology.” The girth of the industrialization of the abortion industry is embodied when the University of Pittsburgh researchers enthusiastically look toward a bright future. “The numbers of consents and collections has been steadily increasing … and we are in an excellent position to expand our services to include the needs of the GUDMAP Atlas project.” 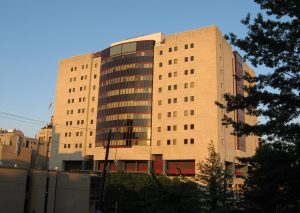 The Thomas Starzl Biomedical Science Tower at the University of Pittsburgh. (Wikimedia Commons)

Other than sounding like the third act reveal in a B movie about a heartless dystopian society, I have no idea what the GUDMAP Atlas project is — I only know I don’t want to be around when it happens.

Other than possessing higher functioning scientific brains, the head of the NIH and all those men and women at the University of Pittsburgh research lab probably live very regular lives. They are neighbors, co-religionists, and pillars of their various communities. I would wager they attend their fair share of parent/teacher conferences, coach T-ball, and would identify as average Joes and Janes.

Sin is a tricky business. It does not always appear as a figure clad in black from head to toe with a voice like a disembodied James Earl Jones. It can creep up on us like so much moral crabgrass.

Think of a day in the life of these scientists. Like a lot of us, it may start with a cup of coffee and some small talk with co-workers about the game the night before or something they saw on social media. After a quick call home to see if the kids got off to school all right, then it’s time for work.

These average Joes and Janes then don lab coats and go about their daily routine, which includes the vivisection of intentionally killed human beings that have been rendered biomedical assets.