A woman’s touch: Female visionaries that changed the world

Rachel Carson (1907-1964) parlayed her curiosity and love for the outdoors, in particular the ocean, into an important and lasting contribution to our study of the environment.

From a young age the sole support for a large and troubled family, she worked full-time and wrote at night. On the Outer Banks of North Carolina, she walked the beach alone, “watching the surge and fall of the tides, the shorebirds patter across the wet sand, the puffs of blown sea froth rolling like ‘thistledown’ along the sand.”

In Maine, she stood for hours in freezing cold Atlantic waters, studying and taking notes. She issued a clarion call about the danger of insecticides on humans and plant life. She agonized, labored, and left us such classics, still studied today, as “The Sea Around Us” and “Silent Spring.”

Jane Goodall, priestess of the chimps, needs no introduction. Barnet brings a fresh, incisive take to the way Jane Goodall’s feminine genius allowed her to mother forth (my phrase) a whole new way of studying animals in the wild. 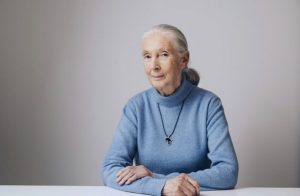 In this April 7, 2017 photo, British primatologist, ethologist, and anthropologist Jane Goodall poses for a portrait in New York to promote the Disney nature film, "Born in China." (Victoria Will/Invision/AP via Crux)

Though without formal training, in 1960 Goodall was invited to the Gombe Stream National Park in Tanzania to observe chimpanzees. She was outwardly unassuming, inwardly driven, and fearless.

She scoured the jungle, clawing her way up mountainsides, through thorns, brush, and vines. With a notebook and a thermos of tea she could sit at the top of a hill for hours, scanning with her binoculars, day after day for months, content with barely a single sighting. She learned to wear bland clothing that blended in with the foliage, never to follow an animal, never to interfere with their activities.

This patient endurance — and what mother doesn’t know it? — paid off. She learned where the chimps foraged for food, gathered, rested, and on one iconic occasion, danced. She began to know them as individuals, to observe the way they related to one another. She named them.

Her studies were initially ridiculed by the male-dominated scientific world, with its insistence upon dry facts, statistics, and figures. And still alive today, Goodall is recognized as one of the most important primatologists of the 20th century and the world’s foremost expert on chimpanzees.

Jane Jacobs (1916-2006) was an American (later Canadian) journalist, activist, and author who profoundly influenced the study of urban planning. After marrying in 1944, she and her husband bought a run-down three-story building in NYC’s Greenwich Village. They renovated it, raised a family, planted a garden. 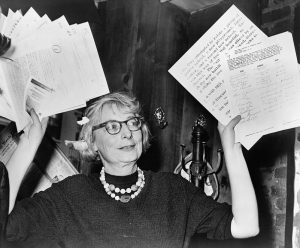 Jane Jacobs, chairman of the Comm. to save the West Village holds up documentary evidence at press conference at Lions Head Restaurant at Hudson & Charles Sts. (Phil Stanziola/Wikipedia)

Like Carson and Goodall, Jacobs relied on close observation, intuition, and experience. The perceived wisdom at the time was to subject tenement neighborhoods to the wrecking ball and erect in their place soulless, multi-storied, apartment with zero street life and, in its place, “open spaces.”

“Open spaces for what?” Jacobs sneered. “Muggings?” Sidewalks, she insisted, were a vital part of the life of a neighborhood, where many eyes assured the inclusion and safety of its denizens.

In the spring of 1956, she delivered an address to Harvard University’s prestigious architectural school, at the time “in the grip of a near messianic belief in the power of modernism to solve every ill of the modern city,”

Jacobs emphasized the vital importance of street-level interaction: people gossiping on the corner, kids playing on the sidewalks. Fruit stands, butchers, cooperative nursery schools, and political clubs were social centers, she averred, “ ‘institutions’ that people created…Notice the small buildings called ‘taxpayers’ and up above, the bowling alley, the union local, the place where you learn guitar.’ ”

She successfully rallied neighborhood opposition to the “renewal” of Greenwich Village and to a proposed Lower Manhattan Expressway. As noted in her NYT obit, her prescription for urban health was “to crowd people and activities together in a jumping, joyous urban jumble.” “The Death and Life of Great American Cities,” her masterwork, has sold a quarter of a million copies and is still widely read by urban planners and rank-and-file citizens alike.

Alice Waters (b. 1944) was a dreamy but determined college student from Berkeley when she went abroad and fell in love with the way the French cooked and lived. Back home, she gathered her friends, brainstormed, and in 1971 opened a restaurant: Chez Panisse. 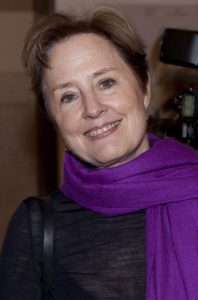 Alice Waters at the US Embassy in Berlin, February 2015. (Wikipedia)

She hired waitstaff and cooks who lacked professional experience but whose spirits she admired. She bought mismatched cutlery and arranged for stunning flowers, music and light. Missing the delicate lettuces — mâche, frisée — from which she’d watched chefs in the French countryside mix their salads, she began to encourage local Bay Area farmers to grow vegetables and fruits from heirloom seeds.

She scoured local farms, backyards, and began to cook with local herbs, eggs, seafood, meat. She saw that growing, cooking, and eating food is a way of taking responsibility for “the real-life consequences” of our “everyday acts.”

The restaurant survived a fire, the winds of change, and evolving tastes. In 1996 Waters started a program, Edible Schoolyards, for inner-city kids and launched a new vocation as food activist. She was awarded a National Humanities Medal by President Obama in 2015, and today is revered by many as the godmother of California cuisine.