A visit to Arcosanti, the reimagined city

Arcosanti has been called an “experimental city,” “an “urban laboratory,” a “caravanserai.”

Seventy miles north of Phoenix, the 25-acre compound, built on a 4,060-acre land preserve, rises from the desert like a mirage.

The project was the brainchild of “visionary” Paolo Soleri (1919-2013). Arcology — a concept combining architecture and ecology — was his guiding light.

“Cosanti” (in Italian, “against things and business”) was the name Soleri gave to his home in Paradise Valley — another 75 miles north and now a gallery, studio, and shop selling ceramics and the sculptural bronze-cast windbells for which Arcosanti has come to be known.

Ground was broken in the 1970s and building continued until 1989. The goal of the project was to combine “the social interaction and accessibility of an urban environment with sound environmental principles, such as minimal resource use and access to the natural environment.”

The compound overlooks stunning views of valley and mesa. The property is dotted with olives and cypresses evocative of Soleri’s native Italy. As an Airbnb guest, my first impression was of a maze with various levels, stairways, corners, arches, connecting sidewalks, dead ends. My studio overlooked a large outdoor amphitheater and I had access to the community swimming pool. Clear instructions were issued as to which areas were reserved for full-time residents and therefore off-limits.

To have your home and workspace constantly overrun by visitors, people constantly walking past and peering into your windows, and people on your walking trails, swooning over the sunsets, has got to be a challenge. Twice I flagged down residents to help orient me: Both went out of their way to be helpful and kind.

The center features workshops, events, and overnight accommodations. Hour-long tours ($15) are offered several times daily and I signed up for one the next morning. We watched a short introductory video and then visited some of the grounds. 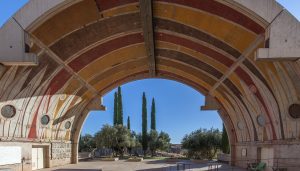 Soleri made innovative use of the land, light, and natural resources, borrowing from the wisdom of the area’s indigenous people. Structures were placed below ground level so as to be insulated year-round. Windows faced south, which both deflected the summer sun and collected heat and light in the lower winter sun. The earth-casting method involved pouring concrete over mounds of packed earth, then excavating the earth after the concrete hardened.

The overall effect is akin to a Hobbit kingdom castle crossed with a Mayan temple.

Who decides who gets in? Who gets to be a resident, an employee? I asked our guide. The process is the same as if you were applying for any job, or to get into a school. OK then — a CV, an interview process, references.

Fair enough. But a city includes the poor, the homeless, the dysfunctional. Where would they fit in at Arcosanti, a community of the intelligent, innovative, well-read, and self-consciously countercultural?

“The erosion of community, destruction of the natural world, and rise of hyper-consumption are key problems of our times. We believe solutions can emerge from radically reimagining our built environment.” OK. But Soleri commuted the 70 miles from Paradise Valley to Arcosanti by car.

Built to house 5,000, the maximum number of people who have lived there at one time anecdotally tops out at around 200. The community has never been fully self-sustaining as to energy or food.

None of that means Arcosanti is or was a failure. It resolutely proclaims itself as an ongoing experiment. Under new direction in recent years, the foundation is clearly looking for ways to expand its community outreach, educational facilities, and vision.

Though he was married, Soleri’s womanizing was apparently common knowledge. In 2017, four years after his death, he was accused by his daughter Daniela of sustained sexual abuse.

The foundation, wisely to my mind, has acknowledged and mourned the abuse, but refrained from taking it as a wholesale condemnation of Soleri’s entire life and work.

But as the tour guide pointed out, the community was built upon devotion to a building, a project. Arcosanti was the shared vision. Soleri was the vision.

There’s nothing prima facie wrong with that. A community that has endured 50 years deserves kudos. And Arcosanti is worth visiting if for no other reason than the spectacular desert backdrop.

Nonetheless, I couldn’t help thinking of the Sagrada Familia, the world-renowned still-unfinished Barcelona church. After pouring everything he owned into his beloved creation, Antonio Gaudí (1852-1926) walked the streets near the end of his life begging money to continue construction, was struck on his way to confession by a tramcar driver, and died in the charity ward, gripping a crucifix.

As for Arcosanti’s main barrel vault: I kept envisioning a long, low altar, the sun setting in the background, and a priest of the One True Visionary: celebrating Mass.