One of the hallmarks of a prosperous society is the amount of leisure that it provides to its citizens. That is a blessing and a curse, as we know how much the devil relishes the vistas from the vantage point of idle hands.

We can also gauge the level of decadence in a given society by the amount of time it spends on frivolity. These days, it seems the money deposited in frivolity banks far surpasses what the Federal Deposit Insurance Corporation (FDIC) could possibly cover.

When this kind of free time is combined with the growing number of “nones” — those without any religious affiliation or inclination — you get things like the Church of the Flying Spaghetti Monster, or FSM, for short. 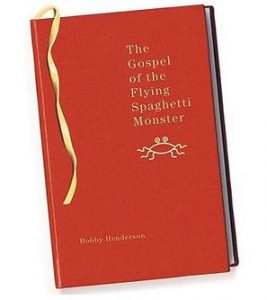 The Gospel of the Flying Spaghetti Monster. (Wikimedia Commons)

What began as a college humor prank letter responding to a local school board’s willingness to incorporate “intelligent design” theory into its evolutionary theory spurred an Oregon State student to pen a kind of manifesto; think if Unabomber Ted Kaczynski had a sense of humor and wasn’t homicidal.

The letter described a new “religious” movement claiming all creation as well as all of nature’s laws were the result of an omnipotent flying piece of pasta.

It was not nearly as amusing as it was offensive, but that is another sign of a decadent society and groupthink: Everyone is “in” on the joke and even if the joke isn’t that funny, not latching on to it with the proper amount of vigor might make one suspect with the other members of the group and that could result in an expulsion, or in the current vernacular, a cancellation.

Now there is a documentary about the “religion” of the Flying Spaghetti Monster whose adherents refer to themselves as “Pastafarians.” It would be more amusing if it had started out more amusing in the first place, and if it wasn’t for the fact that, based on what one sees in the documentary, these are some of the most smug and self-satisfied people on any planet, created by a noodle god or not.

The film shows just how far these people are willing to take a joke when you see them in a legitimate court of law in Europe arguing, with dead seriousness on their faces and colanders on their heads, that they are part of a real church and a real belief system.

The whole point of the exercise, of course, is not to argue for the existence of the great pasta god in the sky but to depose what they perceive as the nonsensical concept of a supreme being and replace that with a deep and abiding faith in science. Or at least that is probably the answer you would get from the average smug Pastafarian you might meet on the street. You’ll know him or her by the kitchenware on his head.

At one point in the documentary about this new religion we get a black screen and a quote in big white letters aimed at zinging all of us believers. It comes from none other but self-professed Christian President George W. Bush. “Part of education is to expose people to different schools of thought.” 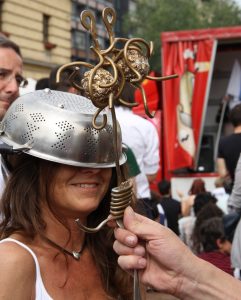 If only “believers” in the Flying Spaghetti Monster practiced what former President Bush was preaching, they might be “exposed” to scientific exceptions to Darwin. This is especially true on the microbiological level — a science that didn’t even exist during Charles Darwin’s time. This is not to say dinosaurs were on Noah’s ark. Arguing Scripture in stops and starts is an invitation to the Tower of Babel, not a temple of wisdom.

But, ironically, the people who are so adamant to announce their independence from superstition and blind belief in something they cannot feel or touch, also “believe” completely in science they only have an inkling of understanding and some of it which, if they looked a little deeper, would find other valid scientific experts with different “schools of thought.” But that scientific inquiry might pose more questions than answers, and Pastafarians, like a lot of their God-denying fellow travelers, are pretty set in their dogma.

And I always find it interesting that when edgy comedians or social commentators of a decidedly nontraditional bent put Christian imagery and tradition in their gun sights, it is almost always Catholic in style and substance. From Monty Python to South Park, the Church gets knocked around like a punch-drunk, over-the-hill fighter, staying in the ring, trying to get one more pay day. They never mock Methodist style and substance. The FSM “gospel” is riddled with mockery of very Catholic concepts like the Hail Mary, the Our Father and the Real Presence.

To be singled out for this kind of treatment can only mean, even in all her troubles, the Church still must be doing something right.