A little ice in LA

I know because I attended the grand opening, which took place from 11 to noon on Thursday, Nov. 14.

From top to bottom, the event, atmosphere, and zeitgeist were quintessential LA.

The setting: a balmy 67 degrees. The rink, at 532 S. Olive Street: surrounded by palm trees and skyscrapers. The main sponsor: Bai, an antioxidant infusion drink. Another sponsor: the North American tour of Disney’s “Frozen: The Broadway Musical.”

A chorus from Grand Arts High School, right down the street, gave us “Jingle Bells.”

We heard the “Star Spangled Banner,” presumably putting out of our minds that, in Washington, D.C., presidential impeachment proceedings were taking place.

Cornell Freney, four-time U.S. national champion on the German Wheel (a gymnastic contraption consisting of two hoops connected by six spokes), emerged on the ice in a purple, spangled top and did his thing to a catchy tune that as best I could decipher was called “Grandpa’s Rule.” City workers in orange vests stopped to gawp and smirk from the sidelines.

Anthony-Paul Diaz, chief of staff of the LA Department of Parks and Recreation, took the podium in stylish sunglasses and called for a moment of silence for the high school students who had been killed the day before at Saugus High School in Santa Clarita.

He reminded us that Pershing Square is one of LA’s oldest plazas and, smack in the middle of downtown, is a throwback to the Colonial era. (It’s also undergone many iterations and is named after John J. Pershing, a World War I general who made his name on the Western Front).

I’d never considered that the reason the square block doesn’t have a bank building or corporate headquarters of some kind sitting on it is because it’s actually a public park. “This will remain a park forever,” Diaz assured us, “dedicated to the citizens of LA.”

Alexa and Chris Knierim, 2018 Olympic team bronze medalists and two-time U.S. national champions, then took to the ice. They were everything a figure-skating couple should be: Alexa with a dimpled smile and upswept blond hair; Chris tall and slim; the two of them, skating to Etta James’ “At Last,” lithe, graceful, classy.

For a minute you could forget the sirens and shootings. For a second you could imagine we really were in some enchanted kingdom. I snuck a look around the crowd and even the hardened photographers and print hacks looked a little misty-eyed.

Sophia Piña-Cortez, assistant general manager of the Department of Parks and Recreation’s Special Operations Branch, gave us the rink’s particulars.

Starting Dec. 4, free concerts are held Wednesday and Friday nights (excluding Christmas week) throughout the month from 8 to 9:30 p.m. On Dec. 7, there’s a Holiday Festival of family activities, including 100 tons of snow and visits with Santa. The rink is open seven days a week through Jan. 20 and costs $14 per hour; $9 if you bring your own skates.

“Frozen” star Alyssa Fox sang a tune that began: “The snow glows white on the mountain tonight,” while, under the heat of the noonday LA sun, I shed my sweater.

Behind her on the rink, a quintet of female skaters in white dresses with slit skirts twirled, leapt, and glided. 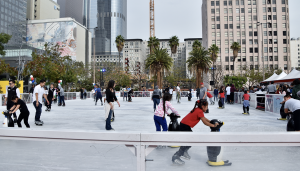 Snoopy from Knott’s Berry Farm took a turn around the ice, accompanied by a charming young woman in plaid muffler and fur-topped white boots.

Diaz and Piña-Cortez took up rubber mallets and smashed the ice sculpture, a ritual that each year marks the official opening of the rink.

The MC reported that over 22 years, more than 100 marriage proposals have taken place on this very sheet of ice.

Then the gates opened and the “Underserved Area School Children” from Grand Arts took shakily to the rink. I was standing beside one of the mothers as her dewy young daughter, with elaborate eye makeup, tottered over and said, “Ma, hold my phone, OK?”

Somehow watching the kids gamely inch along clutching the handrails, floundering, and crashing, just as I would had I the courage to don skates, was the best part of the whole show.

In one especially lovely moment, a willowy young girl, tottering on her blades, laughingly held out her hand for ballast to the nearest guy. He gallantly grabbed it and together, even managing to glide for a second, they made their way to the safety of the rail.

The sun shone. The ice glistened. I thought of St. Lawrence of the Resurrection who one fateful winter had seen a tree stripped of its leaves, and reflected that flowers and fruit would appear in the spring, in a flash “understood,” and devoted every second for the rest of his life to Christ.