People think Angelenos are “laid back,” but the fact is, a simple trip to a music concert requires nerves of steel, an encyclopedic memory for geographical layout, and a longing for transcendence that needs to trump all manner of danger and discomfort.

I refer in this case to a recent trip to the Wallis Annenberg Center for the Performing Arts, which is located on “Little” Santa Monica Boulevard in Beverly Hills.

As you may know, this two-lane artery, lined with ritzy restaurants, upscale boutiques, dentists’ offices, and plastic surgeons, has absolutely no shoulder or curb, is criss-crossed by one-way streets, has narrow, if at all, left-hand turn lanes, and is therefore basically suicidal to slow down or stop.

It’s bad enough during the day, but try driving it at night. Palm trees were swathed in disconcertingly blinking fairy lights. Teslas, Porsches, Lamborghinis whizzed past at warp speed.

The GPS went haywire and started giving directions even I knew were wrong. Gripping the wheel and frantically “navigating,” I realized I would have done just as well to close my eyes. Somehow I found my way and realized that in order to enter the parking lot, I had to stop on a dime — mid-block and with no turn lane — and make a sharp turn to the left and down.

Having arrived, however, I discovered that the Wallis is stunning: a 70,000-square-foot prime piece of real estate between Canon and Crescent. The restored building, designed by Zoltan E. Pali of SPF:architects, has won major architectural awards.

The original 1933 Beverly Hills Post Office serves as its lobby. Beyond that, it’s all airy ceilings, hushed carpet, chi-chi bathrooms, spacious courtyards, upscale “waterfalls,” and bartenders surrounded by shelves of fancy liquors: all very spacious and tasteful and classy, LA-style.

The center opened in 2013 and has been known since for its eclectic and sophisticated programming which, to date, includes more than 275 dance, theater, opera, classical music, cinema, and family programs.

Its programming has been nominated for 57 Ovation Awards and seven Los Angeles Drama Critics Circle Awards. A sampling of upcoming productions includes an experimental staging of Mary Shelley’s “Frankenstein,” Al Pacino in a benefit-staged reading of David Rabe’s “The Basic Training of Pavlo Hummel,” and the documentary “Violins of Hope: Strings of the Holocaust.” 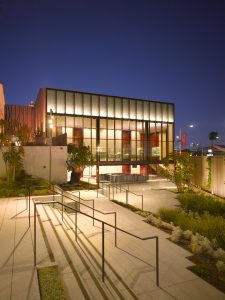 The 500-seat Bram Goldsmith Theater in which the concert took place, all sculptural wood and copper tones, is gorgeous. A lot of people in attendance looked vaguely like movie stars. A 20-something beauty in the seat in front of me greeted a friend and exclaimed: “Guess what I did today! I bought a condo in Century City!”

The concert was in honor of Scott Timberg, longtime LA Times music and culture critic, who died tragically at 50 last December.

The musician was world-renowned pianist Angela Hewitt (b. 1958). Hewitt is on what she calls a “Bach Odyssey,” a series of concerts live-recording every single piece of music that Johann Sebastian Bach ever wrote. We were near the end of the cycle, as she started in September 2016, and plans to conclude on June 2, 2020, at Wigmore Hall in London.

Bach (1685-1750) is, of course, the Baroque-era composer and church organist universally considered to have written, among other things, some of the greatest choral and sacred works of all time (“Mass in B Minor,” “Christmas Oratorio,” and the universally known cantata excerpt “Jesu, Joy of Man’s Desiring”).

The evening’s repertoire consisted of “Four Duets,” “Eighteen Little Preludes” (some of which Bach composed as lessons for his children), and the “Fantasia and Fugue in A Minor” (none of which are terribly well-known), followed by the “French Overture in B minor” and the “Italian Concerto in F Major” (which are).

Hewitt is deeply likable. She’s humble, she’s accessible, she seemed to be enjoying herself. Each piece of Bach’s, she told us before starting, was like a puzzle that needed solving.

She began her piano studies at the age of 3, has been associated with Bach since winning first prize in the Toronto International Bach Piano Competition in 1985, and describes his compositions as “the most beautiful and concentrated music that exists. … Something in it speaks to all humanity.”

She has spent 11 years performing and recording all of Bach’s major keyboard works — a total of 17 CDs — for Hyperion.

“One of the record glories of our age,” Britain’s The Sunday Times called them, and Hewitt herself has been heralded as “one of the reliably mesmerising musicians of the day,” “the priestess of Bach,” and “the purring engine of a Rolls-Royce in motion.”

She has played Bach in London’s Royal Festival Hall, knowing that her mother had died a few hours before. She once played a Bach fugue in the Château de Chillon on Lake Geneva while a beetle slowly climbed up her bare arm.

And on Feb. 23, she played for us graced Angelenos who had braved traffic, found our way to this glittering theater, and were stunned into silence by her virtuosity.

As for return traffic? I didn’t notice. I didn’t drive home that night: I floated.