A cult worth belonging to?

Three disparate events took place that have me seriously doubting the concept of coincidence.

I watched a video by Bishop Robert Barron urging viewers to check out the new book, “After Humanity,” written by C.S. Lewis scholar and Catholic priest Father Michael Ward. The book is a commentary on C.S. Lewis’ collection of philosophical essays “The Abolition of Man.”

I was intrigued and intend on getting the book once I wrest control from the procrastinator demon that dwells within me.

The second, seemingly independent, event involved my random dial surfing on the car radio that landed on an interview with Father Ward.

And the third part of this triptych taking shape in my head was watching a documentary about a young woman who was going to be the next big thing in Silicon Valley, until her cult-like hold on the media, her employees, and very powerful elites, came crashing down at the speed of light.

Without the Bishop Barron video, I might have not known about the book by Father Ward. Because I did know at least something about him, I was a more attuned listener of the radio in my car. If I had not just recently watched this captivating documentary of a young woman who rose to international prominence solely based on her charismatic and cult-like power, something Father Ward said in his interview would not have struck such a loud chord in me.

Father Ward, like his philosophical and theological passion project on C.S. Lewis, grew up in the Church of England. Lewis was never able to swim to the other bank of the Tiber River into full communion with the Church. Thankfully, Father Ward paddled across and is now an ordained Catholic priest.

In his radio interview, Father Ward was asked why he thought Lewis could not make that final and ultimate commitment, when so much of what he believed and what he practiced was, in essence, Catholic to the bone.

Many of the reasons Father Ward proposed were things I had heard before about Lewis. Father Ward then recounted his own personal experiences with his conversion and how it impacted those closest to him. One friend who was leaning Rome-ward could not take the plunge because, as Father Ward recalled, his friend believed the Catholic Church was too much like a cult.

I have heard that argument before as well, but it has always stymied me. I fumble and mumble and generally make a mess of things when I try to explain why the Church is not a cult. Father Ward’s answer to his friend was as precise as a scalpel. He simply affirmed the Church is a cult.

I almost had to pull over and park the car.

The primary definition of a cult is usually attached to some charismatic madman with a hypnotic hold on his followers. Most cultish roads, from National Socialism to the Manson family, are paved in mayhem and death. But the basic definition of the word is almost tepid: a system of religious veneration and devotion directed toward a particular figure or object. 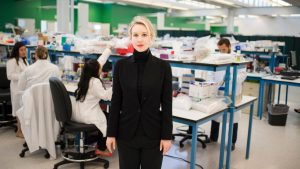 “Cultish” is the best way to describe the documentary featuring Elizabeth Holmes who, at 19, dropped out of Stanford and started a Silicon Valley company claiming its technology would revolutionize the blood-testing medical industry. A billion dollars of investment capital poured into her company and soon Wall Street experts were saying the company was worth $9 billion.

Elizabeth was young, dressed in all black all the time, and spoke in an authoritative baritone voice. Her 400 employees venerated her every word and some of the most powerful men in the country joined her board and were in thrall of her powers of persuasion. Disloyalty was punished swiftly in this company.

As the documentary about her rise and rapid fall unveils, it was all a house of cards. The technology did not work, Elizabeth Holmes did not have a clue about it, but believed her own PR, even though it has led to criminal fraud charges in a federal court.

Like all cult leaders, the truth eventually wins out. But what if your cult leader is the embodiment of truth?

Unlike the concoctions devised by humans, whether political, murderous, or corporate, the cult leader of the Church is unique in human history, primarily because he is not human.

Lewis gives us all we need to know to explain why the Church is a cult, but one with a big difference: “You can shut him up for a fool, you can spit at him and kill him as a demon, or you can fall at his feet and call him Lord and God.”