A catechism of stone

I’ve never been much for bucket lists. I’d like to think that is because I simply go through life enjoying and living in the moment, but it is probably more due to procrastination: I’ll get to it around the time they’re wheeling me into the intensive care unit.

If I had a bucket list, however, I recently half-crossed one item off: a visit to Barcelona’s famed Basilica de la Sagrada Familia. A minor basilica still incomplete after more than 130 years of construction, Sagrada Familia is the master work of an extraordinary Catalan architect named Antoni Gaudi.

That previous paragraph needs unpacking. I say “half-crossed” because I saw it only at night when I was fortunate enough to attend Mass there. In Spain, I found out, a great way to avoid the admission fees at historic churches is to go to Mass or visit the Blessed Sacrament. Piety saves.

More importantly, Gaudi is the treasured son of Catalonia, the eastern province of Spain that is now in the throes of a separatist struggle, but has historically been known for its business savvy as well as its artistic legacy. The church he designed is so complex and massive, so artistically dense that it is a catechism in stone.

Gaudi was the son of a boilermaker, and he seems to have inherited a sense of the pliability of material things, wedding it to his great reverence for the natural world. All of this comes together in this towering church. 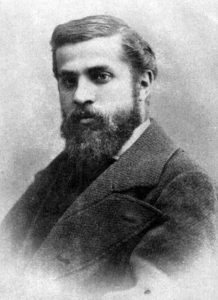 On the exterior, it looks a bit like a sandcastle built by the dripping of wet sand into myriad nooks and crannies, soaring towers and a mélange of religious iconography beneath spires tipped with fruits and vegetables.

Inside, the church pulls your eyes heavenward, evoking a rainforest of towering trees that cause you to look up as the trunks thin and branch out, making this immense stone and concrete structure seem organic, almost as if it is still growing its canopy of stone.

Gaudi seems never to have met a straight line he liked. Even the pillars that support its roof undulate and taper. The pews are subtly curved as well, and staircases and balconies coil and ripple off to the sides of the nave.

Over the altar, the crucified Christ literally hangs in mid-air, suspended between heaven and earth. But where most churches are adorned with statues on the inside, it is the outside of the building that teems with images from Scripture: the Holy Family, the Nativity, the miracles, and multiple tributes to Mary, the mother of God.

How extraordinary was Gaudi? It is said that when he graduated from architectural school, the head of the school said, “Today we have conferred the degree of architect to either a madman or a genius.”

That question has been resolved, but equally extraordinary is that this genius may one day become a saint. His cause has been introduced, not as a tribute to his architectural craftsmanship, but because of his spirituality and his witness. He cared for his workers as well as his work, and his devotion to his faith is well-documented.

His life as well as his building is a provocative sign of contradiction in a region that, like much of Europe, has grown far from its religious roots. This masterwork of art and architecture is an exhilarating reminder that the religious imagination remains alive and well, despite the brutalities and blinkered materialism of our age. 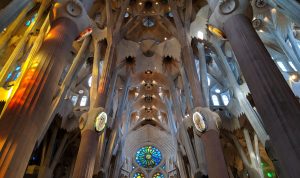 As I absorbed the nighttime chiaroscuro of image and shadow within and without the building, I found myself thinking of the Cathedral of Our Lady of the Angels in Los Angeles. Designed by another Spanish architect, José Rafael Moneo, it, too, is an embodiment of the modern engaging with the timeless.

While the concrete walls have none of the explosive life of Sagrada Familia, it has its own powerful witnesses in the marching tapestries of saints pointed toward the altar. The crucifix has already been adopted by Angelenos of all ethnicities, and its alabaster windows, evocative of medieval cathedrals, filter the southern California light, softening and warming the interior.

While the scale of the Cathedral of Our Lady of the Angels is impressive, it does not dwarf the worshipper. I particularly admire the plaza, reimagining a European staple of its great churches, where people gather for worship, for festivities, and even for protest.

For both these churches, the drama is in the meeting of the old and the new. Their lesson for us is this: We are not prisoners of the past, but we are its heirs. We are not here to retreat into our bunkers, nor are we to abandon what we have been entrusted with.

Finding ways to speak timeless truths to new ears is not just the work of the catechist and the theologian, but also the painter, the sculptor, the writer.