A biblical approach to saving the planet

Hope Jahren is a geobiologist known for her work with soil science and fossil forests. Currently as the University of Oslo in Norway, she has won numerous prestigious awards and in 2016 published the highly acclaimed memoir “Lab Girl.”

Her second book is titled “The Story of More: How We Got to Climate Change and Where to Go From Here.”

But don’t start yawning. Jahren engagingly interweaves meticulously researched data with her Minnesota childhood (she was born in 1969), family history, and our own daily lives.

Early on she sets forth her central thesis: “[T]hat most of the want and suffering we see in our world today originates not from earth’s inability to provide but from our own inability to share. … It is because so many of us consume far beyond our needs that a great many of us are left with almost nothing.”

In succeeding chapters, she charts several unmistakable trends over the past 100 or more years: increased life span, steady urbanization, massive leap in grain yields due to genetic modification, the corresponding increase in pesticide use.

She includes fascinating pages on the human and animal production of manure, lays out why meat-eating represents a massive waste of resources (aquaculture doesn’t fare much better), delineates the dangers of the high-fructose corn syrup that permeates our food supply, and describes her lifelong hatred of cars.

Worse: a whopping 40% of the food we buy goes straight into the garbage. The problem is worldwide: “Every day, almost 1 billion people go hungry, while a different billion people intentionally foul enough food to feed them.”

The point being that the way we live is simply not sustainable for very much longer. We’re running out of resources. 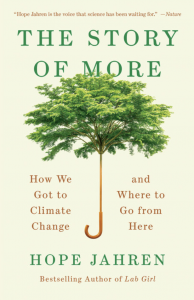 But Jahren is no doomsday guilt-tripper. She insists upon hope. She offers a simple, yet radical solution.

“What was only a faint drumbeat as I began to research this book now rings in my head like a mantra: Use Less and Share More … there is no magic technology coming to save us from ourselves. Curbing consumption will be … the biggest challenge our generation will ever face.”

Where to start? Examine your values. “Which [issues] resonate with your daily life, your greatest fears, your highest aspirations?... Where does world hunger fall on your list? Extinction of species? Weirding weather?”

Gather information: Take stock of your possessions and habits in order to see how they stack up against your values.

Then, identify one issue to focus upon — “the one that you are willing to sacrifice for” — in order to make your activities more consistent with your values. Can you drive fewer miles? Carpool? Buy 40% less food?

There, buried, is the key word in Jahren’s book and thought: sacrifice.

In a way, hers is really a call to pray, fast, and give alms — to keep a kind of year-round Lent.

Could any scheme for saving “our common home,” as Pope Francis put it in the encyclical “Laudato si' ” (“Praise Be toYou”), be more Gospel-based than using less and sharing more?

Is not our whole Christian notion of love based on life-enriching forms of sacrifice and penance?

So we’re concerned about climate change: Are we willing to give up our gas-guzzling SUV, our vacation home, our vacation? To cut down on meat? To forego that new pair of shoes?

As followers of Christ, are we willing to support our convictions that birth control and abortion are grave moral wrongs by consenting to be a little colder in winter and a little hotter in summer? Are we willing to forego four out of five plane trips?

Are we willing to admit that loose sexual behavior is a social justice issue, as reflected in the Church’s teachings on marriage and the family, that directly impinges upon women and children, people of color, immigrants, and the poor?

“Hey let’s not go overboard!” we might be thinking here.

The cross, in other words, can’t be marketed. There is no potential ad revenue and zero social media cachet in a credo that consents to be poor, a worldly “loser,” out of step with the culture.

But if our current habits and possessions were in line with the Gospels, our way of life would not be ruining the planet. You don’t have to be a scientist or a theologian or a public intellectual to see that: The truth would be clear to a child, which is exactly who Christ appealed to.

We begin to enter into a deeper reading of the parable of the rich young man (Matthew 10:17–31).

I decry climate change, Lord, my heart bleeds for the person of color, I champion the cause of women. What must I do to gain eternal life? Use less and share more.

We all know what happened next. The rich young man went away, filled with sorrow.