Father Patrick Philbin, of the Lalanne House Marianist Community, Los Angeles, died on July 25, 2022, in Orange, California. He was 89 years old, and had spent the last 69 years in religious life.

Father Patrick was a gentle, affable teacher who felt blessed to engage with a remarkable diversity of students during his long ministry. He taught teens from middle-class and affluent families, high schoolers from impoverished backgrounds, and university students from China, Korea, the Philippines, and Vietnam. In his later years, he spent about half of his time in Ho Chi Mihn City, Vietnam, teaching seminarians and nuns, a ministry that gave him great joy. 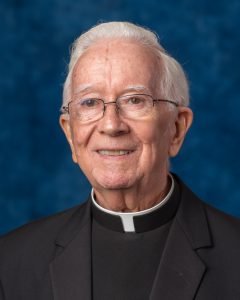 Patrick Bernard Philbin was born on July 10, 1933, in Akron, Ohio. He was the sixth of seven children (3 brothers and 3 sisters) in the family of John and Margaret (Bevans) Philbin, who had emigrated from Ireland.

Young Patrick attended St. Vincent Grade School and St. Vincent High School (now St. Vincent-St. Mary High). He had known for years he was interested in religious life, and his principal arranged for him to meet with a Marianist recruiter during his final year of high school. He quickly became certain he’d found his calling. Patrick entered the novitiate at Marcy, New York, in 1951, and professed first vows there on December 28, 1952.

He attended the University of Dayton in Ohio, earning a bachelor’s degree in 1955. He began teaching English that autumn at Chaminade High School in Dayton and remained there for four years. He professed perpetual vows on August 15, 1956, in Dayton. The young brother was then sent to another Chaminade High School, this one in Mineola, New York, where he taught from 1959 through mid-1971. He used his first few summers for advanced studies, and earned a master’s degree in French from Western Reserve University in 1962.

Father George Cerniglia taught with Father Patrick at Chaminade in Mineola and said the young brother was a gifted teacher who was loved by his students. “I remember he told one of his French classes that they couldn’t hold a candle to the other French class. The next day, the members of that class all brought in candles for Pat. He just laughed!” said Father George.

“Brother Pat was my spiritual director in the months before I left for the novitiate in 1966,” said Brother Bob Bouffier, who had been a student of Brother Patrick’s at Chaminade in Mineola. “As we walked around the Chaminade track, he’d offer me good counsel as to what to expect. He told me to leave any difficulties I encountered with the Blessed Mother.”

Brother Patrick began seminary studies at Immaculate Conception Seminary in Huntington, New York, in July 1971. He earned a master’s degree in theology from Notre Dame University in August of 1972. He was ordained on November 25, 1972, in New York.

Following a brief stint as teacher and chaplain at St. James High School in Chester, Pennsylvania (1973-1974), Father Patrick was called across the country to serve at Junipero Serra High School in Gardena, California. For the next 13 years, Father Patrick ministered to the Serra school community, serving as a teacher, chaplain and, eventually, principal. He also was the director of the Marianist community at Serra for several years.

Father Ted Ley lived and taught with Father Patrick at Serra High, and said he learned important lessons from him. “Pat helped me understand what we in the Society of Mary refer to as a ‘prudent inclination toward leniency,’ when dealing with disciplinary problems at school or really in any human circumstance,” said Father Ted. “Pat was a true Christian in his way of thinking and judging. I’ll always be grateful for his example.”

Father Patrick earned a third master’s degree — this one in counseling from Loyola Marymount University — in 1987, and concluded his tenure at Serra that same year. Following a year’s sabbatical, he was asked to become the Catholic chaplain at the University of California, Irvine, an opportunity that would open up new possibilities for the Marianist, who was now in his mid-50s. “There I ministered daily to Filipino, Chinese, Japanese, Korean, and especially Vietnamese students, as southern California became home to many leaving the ravages of war in Vietnam,” Father Patrick later wrote.

It was while he was working with the Vietnamese community in southern California that Father Patrick was invited through the Diocese of Orange (California) and the auxiliary bishop of Ho Chi Mihn City to teach first-year seminarians and young nuns at the Archdiocesan Pastoral Center in Ho Chi Mihn City.

Beginning in 2000 he spent six months of each year in Vietnam for nearly two decades. Troubled by the desperate poverty he witnessed in Vietnam, Father Patrick also began fundraising among his many friends, associates and organizations in the U.S. to help fund improved medical care and educational opportunities for “the poorest of the poor.” He worked through local organizations to ensure the money was spent for the greatest impact.

As he celebrated his 70th anniversary of profession and 50th anniversary of ordination in 2022, Father Patrick wrote of his work in Vietnam, “In retirement, this continues to be a joy beyond my fondest imaginings as a young Marianist religious.”

“Pat was a very spiritual person as well as being an excellent administrator,” said Father Pat Tonry, a longtime colleague of Father Patrick’s. “In his later years, he did a great amount of good among his Vietnamese students and seminarians. He was, in short, a very good priest.”

May he rest in peace.