Steven was born in 1967 in Oak Park, Illinois to Robert Marsh and Mary (Rocco) Marsh. His family moved west and settled at St. Dorothy Church in Glendora when Steve was in third grade. St. Dorothy remained the lifelong spiritual home for Steve, his wife Marilyn, and their two children. 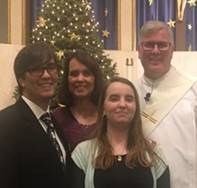 Ministry, both at the parish and in the greater Catholic community, was always a central part of Steve’s life. It was a conversation with Deacon Marv Estey that ultimately led to Steve discerning his calling to the permanent diaconate. After five years of formation, he was ordained on June 7, 2008, at the Cathedral of Our Lady of the Angels.

Deacon Steve was assigned to St. Dorothy Church, where he served in a wide variety of ministries. Volunteering at the parish’s annual homeless shelter, ministering to inmates through Kairos retreats, running middle school ministry, acting as a journey couple for the diaconate program, and serving as the Chaplain for the Catholic Committee on Scouting were especially near and dear to his heart. Throughout his ministry, Deacon Steve always expressed the importance of his family, who had walked the journey with him.

Steve is survived by his wife of 31 years, Marilyn (Wilson) Marsh; his children, Heather and John Marsh; his mother, Mary Marsh; his sister, Juliette Marsh; and his nieces Madi, Rosie, and Bella.

Services will be held at St. Dorothy Church, 241 S. Valley Center Ave., Glendora. A vigil service will be held on Thursday, Sept. 22, at 7 p.m. The funeral Mass will be Saturday, Sept. 24, at 10:30 a.m. Interment will take place at a later date in a private ceremony at Queen of Heaven Cemetery.