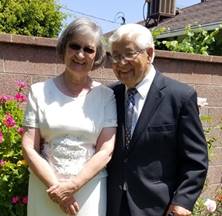 Don Lee Gath was born in 1937 in Helbig, Texas to his parents Roy and Levia. He spent his early years in Louisiana before moving with his family to Los Angeles at age 5. After graduating from Huntington Park High School, Don attended Woodbury University where he received his Bachelor’s degree in Foreign Trade. Jobs were hard to find at this time, but he landed one in the mailroom of Chubb Insurance Company, thus beginning his lifelong career in the insurance industry. He also served his country for eight years in the Air Force Reserves.

Don was a member of the Knights of Columbus for over 60 years, attaining the rank of 4th Degree Knight, and serving as Grand Knight for Huntington Park Council. He met his future wife, Tina Brunasso, while serving on the council with her father, Mario. They were married in 1970 and together raised two sons and two daughters. Don was a devoted father, and loved spending time with his children: coaching his son’s baseball teams, serving as their Boy Scout Master and cheering his daughters on from the stands during volleyball games, all the while building a thriving insurance business in the Long Beach area, where he continued to work daily until he was hospitalized in early May.

Don’s spiritual home was St. Joseph Church in Long Beach, where Don taught confirmation and baptism classes, and served as lector and Eucharist Minister.  His selfless service to the church caught the eye of his pastor, who invited him to apply for the diaconate. Don said “Yes” (of course) and he and Tina embarked on a path that would change their life forever. In 2001, Don was ordained a deacon for the Archdiocese of Los Angeles and assigned to St. Joseph Church, where he and Tina served faithfully as a deacon couple for 20 years.

He loved baptizing children, visiting the sick and homebound, ministering to the homeless at Project Achieve and on the streets of Skid Row with Mother Teresa’s Missionaries of Charity. He served women in need through Precious Life Shelter. Even in his later years, Don continued to serve. He helped form a new Board of Directors in 2017 to restructure, remodel and reopen the St. Francis Center of Long Beach, fulfilling his dream to reach out to the wider Long Beach Community, serving his brothers and sisters in need.

Don loved making homemade ice cream, rooting for the Angels and Dodgers, and attending his grandchildren’s games, plays, and dance and piano recitals. He also loved to travel and went on many pilgrimages and cruises. In his last months he enjoyed spending time with Tina in Palm Springs. He will be missed by all whose lives he touched.

Don is survived by his beloved wife of 51 years, Tina, and their four children, spouses and eleven grandchildren:  David and wife Jackie, (Gabriella & Matthew); Gregory and wife Beth (Anthony, Clare, Catherine, Jane, Rose and Michael); Christina Witter and husband Steve (Everett and Ian); and Michelle Gath (Natalie). He is also survived by his only sibling, Ken Gath.