Brother Robert J. Juenemann, of the Cupertino Marianist Community in Cupertino, California, died  on July 28, 2022, in San Antonio, at the age of 87 with 66 years of religious profession.

Brother Robert “Bob” was a beloved fund-raiser and builder who used the work of his hands to strengthen the financial position of his Marianist community when it foundered during difficult economic times — and his gift of interpersonal engagement to establish a donor base that ultimately would sustain and grow various Marianist ministries for generations to come. 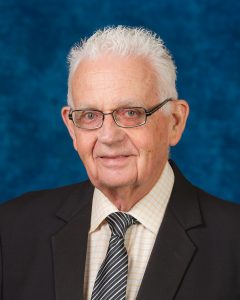 Robert J. Juenemann was born on March 16, 1935, in Los Angeles, California. He was one of five children in the family of John and Elsie (Zielski) Juenemann/Williams. He attended a private grade school in Temple City, California and then went on to graduate from San Gabriel Mission High School in San Gabriel, California.

With two Dominican nuns and several Benedictine and diocesan priests among his aunts, uncles and cousins, Bob knew that the tradition of religious life was strong in his extended family. Discerning his own call to a religious vocation, he listened to the advice of one of his high school teachers, and contacted the Society of Mary after graduating.

When Bob entered the novitiate in 1954 at Villa St. Joseph in Santa Cruz, California, it was his first direct encounter with the Marianists. Bob professed first vows at Villa St. Joseph on December 8, 1955, and then began scholasticate studies there.

One of his first classrooms was the chicken coop, tending to the 2,000 chickens that fed the community. Before long, he was also assigned to visit local farmers in person, asking for produce that would help sustain the community of more than 50 novices and scholastics. This was the beginning of his ministry in development work — a calling that Brother Bob would continue for over five decades.

Brother Bob professed final vows at Santa Cruz on August 26, 1961. By then, he was involved with raising funds for, and helping to construct, two additional buildings for the community there. He also took a few courses at the University of San Francisco during this period, but by his own admission, “my grades were not the best, and my test scores were not good either.” But Brother Bob discovered that a college degree was not necessary for providing a remarkable gift of service to the Society of Mary. He would spend the next 20 years helping the Marianists acquire properties and raise funds for their facilities in Cupertino, the San Juan Community, Villa St. Joseph and the Marianist Center.

One skill set that did undergird his success in this ministry was his love of cooking. He often thanked donors, board members and friends of the Marianists by preparing delicious lunches and dinners — and found that this “form of Marianist hospitality was very effective in creating bonds with others.”

During this time, he also worked to establish an advisory board for the then-Pacific Province a group of devoted lay men and women who offered their expertise in a wide range of financial management and business procedures. Based on their insights and assistance, the province was able to grow its endowment almost 300-fold from 1963 to 2000.

Brother Bob also helped to launch a deferred giving program in the province — with generous donors signing on to support the work of the Marianists through charitable remainder trusts, wills and annuities.

Looking back on his more than 60 years of development work, Brother Bob reflected gratefully in 2018 about the doors that had been opened to him as a Marianist. “I have met so many wonderful people,” he said. “Everyone I have called on has had more experience, education, power and money than me. They have all been wonderful mentors.”

For his part, Brother Bob also made a positive impression on those he encountered — including those like Brother Gary Morris, who counted him as a friend for over 50 years, and like Father Michael Chiuri who first met Brother Bob after he’d mostly retired from development work. “He was a truly remarkable man in many ways,” Brother Gary says. “As soft-spoken and introspective as he was, Brother Robert made a big difference through the professional and diligent way he met, honored and supported the many benefactors of the Brothers’ communities and apostolic works in California, Hawaii and Korea. He sincerely befriended many benefactors and never forgot to travel the country to meet with them, or to communicate with them by mailing cards to all of them for their birthdays and holidays, or just to make their days memorable by greeting them on behalf of his Marianist Brothers. He was appreciated for his kindness and his graciousness.”

Brother Bob was the most cultured yet down-to-earth person I’ve had the opportunity to call a friend and brother,” Father Michael says. “He loved the fine arts: cinema, paintings, architecture, sculptures, literature, theatre and music. He was also a huge advocate for social justice and social change, believing that everyone should have access to the fine arts. He saw his ministry in fundraising as a way that he could assist others affect this change through Marianist ministries, especially in education and by working to uplift the poor.”

Acknowledging Brother Bob as “a fantastic gourmet chef and baker,” Brother Gary recalls that “Brothers, benefactors and his many friends would rave about his marvelous dinners and crave his signature fruit tortes and cakes.”

In addition, Father Michael remembers Brother Bob as “deeply spiritual and a prolific reader who would always recommend something that he had just read or a talk that he just heard. He never forgot a birthday or tired of reminding me that rest was ‘a necessary part of work.’ In fact, his last words to me when I visited the Cupertino community in mid-July were that I was working too much and not resting enough — mainly because I could not visit with the community for an extended period. I will miss his great sense of humor, and his passion to have everyone invited to the table.”

It's a sentiment shared by Brother Gary, who says, “I will always remember Robert as a dedicated and prayerful fellow Marianist Brother and a friend. He will be sorely missed by those whom he served and generously responded to his gentle urging to be benefactors and friends.”

May he rest in peace.