ROSARIO, Argentina — In the early hours of Nov. 16, 1989, elite soldiers from the Salvadoran military trained by a U.S. commando entered the campus of San Salvador’s Catholic university and massacred six Jesuit priests and two women.

To this day, no one has been charged. But earlier this month, El Salvador’s highest court ordered the reopening of a criminal investigation into the massacre. The decision follows an appeal filed by the country’s Attorney General, Rodolfo Delgado.

Attempts have been made in the past to prosecute those behind the killings during the country’s civil war. An amnesty declared in 1993 made this impossible, but in 2016 it was declared unconstitutional, opening the possibility for these crimes to be tried.

Approximately 75,000 citizens were killed and 8,000 disappeared in the civil war waged between U.S.-backed government forces and Marxist rebel fighters.

This particular case, however, was closed in 2020, without charging the culprits behind the crime that took the life of the six priests, their housekeeper, and her daughter.

In reopening the case Jan. 6, the Constitutional Court gave 10 days to the country’s criminal court to launch an investigation into those who were identified as possible masterminds of the murders: former President Alfredo Cristiani, Generals Humberto Larios, Juan Bustillo, Francisco Fuentes, Rafael Zepeda, and René Ponce, and Colonel Inocente Montano, who was already convicted in Spain, sentenced to 130 years. (Five of the Jesuits hailed from Spain).

The timing of the announcement is important, coming only days before the Jan. 19 beatification of four martyrs of the country’s civil war: Father Cosme Spessotto, OFM; Father Rutilio Grande, SJ, who was martyred along with Manuel Solórzano, a sacristan in his 70s; and Nelson Rutilio Lemus, a boy in his teens. 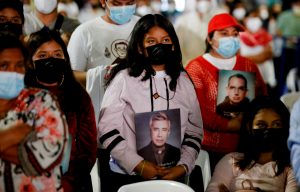 “National and international voices have been demanding justice for this case for years: we promise them that we will pursue those responsible and achieve justice,” said Delgado in response to the announcement of the reopening.

The reactions from the Catholic Church in El Salvador, however, seem to be less enthusiastic: not because they don’t want justice, but because they are not sure it will actually come.

Cardinal Gregorio Rosa Chávez, auxiliary bishop of San Salvador and once a close collaborator of saint and martyr Archbishop Oscar Romero, said that the crime of the Jesuit priests is not merely “any crime,” and that it is “well documented.”

"The case of the massacre at the Central American University can constitute a first response to the lament of the victims in El Salvador who have not had true justice, but rather immoral and biased judicial resolutions,” he said. “The issue can give rise to a serious reflection on how to do justice in El Salvador.”

Still, Cardinal Rosa Chávez believes that the process to reopen the case “was not correct” in its execution, saying he found the news “surprising” and that neither the Church nor the university were “consulted” beforehand. Finding out after the fact, he said, was “nasty.”

Archbishop of San Salvador José Luis Escobar Alas made similar points but struck a slightly different tone, describing the reopening of the so-called “Caso Jesuitas” as an act of “justice for the victims,” not revenge and seeing in it hope of finally discovering who was behind the crime.

The Central American University (UCA), the Jesuit-run school where the massacre took place, noted in a statement that the case had traveled “a long, complex and winding road” over the years and asked that justice be sought, but not for the political gain of some.

And like Cardinal Rosa Chávez, the school administration said the announcement also caught them by surprise, complaining that the perspective of those who actually know the case had been ignored and bypassed by prosecutors.

While promising to participate in the case proceedings, the university joined both bishops and the country’s Jesuits in asking that they not be “politically instrumentalized.”

“In itself the reopening of the case is a good thing because it is in favor of justice,” said Archbishop Alas. “ But is justice going to be done or not? That is the point: If the case has been reopened, let justice be done. Otherwise it would be nonsense, it would be a re-victimization."

Their concerns are certainly not without cause. Similar cases in El Salvador and throughout Latin America have a reputation for being manipulated by politicians. Here, however, the intellectual authors of the massacre are associated with the right-wing party defeated by sitting President Nayib Bukele defeated in the last presidential elections, and which today looms as a strong opposition.

It is worth pointing out, as Cardinal Rosa Chavez did, that though the “Jesuit Massacre” is one of the most internationally well-known crimes associated with the war (together with the murder of St. Romero), it is unfortunately far from being the worst unresolved one.

In the El Mazote Massacre, for instance, almost 1,000 people were killed overnight by the military in December of 1981. Why, many Salvadorans are now asking, are the lives of eight worthier of the government’s attention than that of so many others?