Why Nicaragua’s bishops can speak out against a dictator

ROME — In a process widely dismissed as a “joke” and “dubious” by members of the international community, Nicaraguan President Daniel Ortega was reelected last month after having imprisoned his main electoral opponents.

Even before the tally was announced, U.S. President Joe Biden said that Ortega and his wife, Rosario, the country’s vice president, had orchestrated a “pantomime election that was neither free nor fair.”

Only one of the country’s 13 Catholic bishops cast a vote. The rest refused to take part in what they denounced as a charade, with many openly acknowledging the matter in homilies the weekend of the election.

The bishops’ very public boycott of the November election reflects the unique situation they find themselves in: For the last three years, Catholic bishops and priests in Nicaragua have been the only members of civil society to publicly challenge Ortega, a leader who has come to resemble the dictator he helped overthrow in the late 1970s.

In April 2018, when hundreds of thousands took to the streets to protest proposed pension reform, the Catholic hierarchy opened the doors of churches for the wounded to find refuge, and for doctors to clandestinely treat them, as they were banned from doing so in public hospitals. According to the Inter-American Commission on Human Rights, at least 355 people were killed during the protests.

Since the 2018 uprising, Catholic churches have been attacked, including the Managua cathedral in 2020. In 2019, Managua Auxiliary Bishop Silvio José Báez was essentially exiled from his diocese at Pope Francis’ request after receiving several death threats.

This year, the Ortegas have called the bishops “coup perpetrators,” “offspring of the devil,” “foreign agents,” and accused them of preaching a false Christianity. They have dispatched police to intimidate bishops and priests, even installing a police booth across the street from the home of Managua archbishop Cardinal Leopoldo Brenes Solorzano.

In his first public appearance since falling ill with COVID-19 in September, Cardinal Brenes said last month that Church leaders cannot “remain silent” seeing the suffering of the people.

Yet beyond the verbal attacks, the seizure of Catholic churches around the country by the government, and bullets shot at bishops’ cars (apparently intended to miss their targets), the government of Ortega has thus far dangled violence against the bishops as a metaphorical sword of Damocles, but has refrained from actually imprisoning clergy.

As long as that policy continues, bishops and priests are expected to keep speaking up against Ortega and his wife. 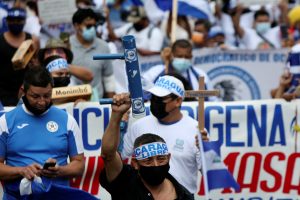 Father Pedro Mendez of the Diocese of Masaya, 20 miles southeast of the capital of Managua, was tortured by the government in 2018 as part of the “cleansing operation.” The day of the election last month, he hung a banner in front of his church with the support of his parishioners proclaiming that their “finger will remain clean” from participating in the elections, despite voting being mandatory in Nicaragua.

Bishop Rolando José Álvarez Lagos of the Diocese of Matagalpa regularly speaks out against the government in his Sunday homilies. On Nov. 28, he characterized the problem of widespread poverty in the country as a political one.

“There are many things that have impoverished us,” he said. “We are not poor because we are poor, but because there is a political decision of not distributing wealth with equity, subjecting the people to poverty.”

For someone so sensitive to criticism and prone to taking ruthless measures, why hasn’t Ortega taken stronger measures against the country’s troublesome Catholic bishops?

Ortega, much like Latin America’s other well-known socialist authoritarian leader, Venezuela’s Nicolás Maduro, seems to have understood that despite being a “soft power,” the Vatican is too big a bear for them to poke.

It is a subject that comes up often in my conversations with Cardinal Jorge Urosa Savino, the late archbishop of Caracas who passed away from COVID-19 earlier this year. I would bring up the criticisms of the Vatican’s apparent silence on Maduro’s dictatorial regime, under which 90% of Venezuelans now live in poverty. And as I’ve reported in Crux, every time he would tell me that prelates like himself dared speak up because they knew they had the support of the Holy See and of the Holy Father.

Maduro too has verbally attacked the bishops, made threats against their lives and had his militants create havoc by invading churches during Sunday Mass.

Yet both in Nicaragua and in Venezuela, though facing many challenges, Catholic non-governmental organizations (NGOs) such as Caritas and Aid to the Church in Need are exceptions to the rule when it comes to the presence of foreign organizations providing aid to undemocratic countries where people face starvation. The bishops, and the papal representative in the country, are always summoned for dialogue efforts, and the prelates always say yes.

One explanation for why clergy and religious have mostly been spared violence is that unlike countries like Syria or Nigeria, where civil conflicts are permeated by religious fundamentalism, government supporters in Nicaragua and Venezuela aren’t ready to kill their adversaries in the name of God.

But many observers also point to another important reason why Ortega and Maduro don’t seem to deliver on their threats against the hierarchy: Despite the growing secularization of the international community, they know that a hard power like the United States, together with the European Union and the United Nations, would all join the head of the Catholic Church in protest.