ROME — When it comes to fighting clerical sexual abuse in the Catholic Church at a national level, few roles are as key as that of the country’s papal nuncio. As the intermediary between the country’s bishops and the Vatican, the pope’s ambassador plays a key role both in appointing bishops and removing them.

Take a look at the countries hit hardest in recent years by sex abuse scandals — particularly the United States, Australia, Ireland, Poland, and Chile — and you’ll find something in common: At one point or the other, the nuncio was faulted with not handling things properly.

Slowly but steadily, however, a new generation of Church diplomats have proven themselves capable of handling the sexual abuse crisis differently: taking allegations seriously, opening investigations against bishops, and being more transparent about the real reasons for a bishop’s removal from office, rather than the reliable excuse of his having reached retirement age. In short, this crop of nuncios is seen as treating sexual abuse as a crime and a plague, rather than a sin or shortcoming.

One such case is the nuncio in Poland, Archbishop Salvatore Pennacchio, who has seen the removals of 10 bishops there over the last nine months. The Italian prelate has made a point of releasing statements after each of their removals giving the reason for their dismissals — something that the Holy See’s press office, under the direct order of the Secretariat of State, has declined to do.

The flip side of taking this kind of stance, however, can make the nuncio an unpopular figure among the bishops he’s tasked with engaging with. Such is the case of the nuncio to Mexico, Italian Archbishop Franco Coppola, who is being transferred to Belgium.

Archbishop Coppola served the customary five years in the country with the world’s second largest Catholic population after Brazil, and as such, his transfer has gone mostly unquestioned. However, the cogs of the machine that set his removal in motion were oiled early last year, just weeks before COVID-19 sent most of the world into lockdown.

The day was Feb. 6, 2020. Archbishop Coppola was in Rome, where he met with Pope Francis. Though the content of their private conversation has not been talked about (as is customary), it is safe to presume that the issue of clerical sexual abuse in Mexico, birthplace of the late Father Marcial Maciel, was high in the agenda.

Maciel, founder of the Legionaries of Christ, was credibly accused of abusing children and instituting a cult-like atmosphere among the institution’s members. He was sanctioned in 2006 and died two years later. The order has since undergone a structural renewal overseen by the Holy See.

Less than three weeks after the Feb. 2020 meeting, news broke that Pope Francis was sending Maltese Archbishop Charles Scicluna and Spanish Msgr. Jordi Bertomeu to Mexico. The same pair had been dispatched to Chile two years earlier to investigate a slew of abuse and cover-up allegations. They came back to Rome with a 2,600-page dossier that led the pope to apologize for mishandling the situation in Chile. The episode led to every Chilean bishop presenting his resignation to the pope. 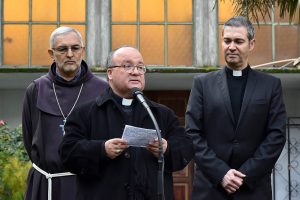 The mission to Mexico was set to take place March 20-27. In their announcement, Mexico’s bishops characterized it not as an investigation per se, but as an assistance mission to help the local church fight abuse, as the country began to reckon with what many consider decades of clergy sex abuse and cover-up. In a video message that winter to a Catholic abuse prevention formation center in Mexico City, Pope Francis had acknowledged that those working to clean up the Church face the threats of some willing to “hire hit-men” to prevent their success.

But Archbishop Coppola’s embassy publicly attributed two reasons to the visit: a mission to “help,” but also an investigation — hence why the nunciature had expressly asked victims to come forward to speak with Archbishop Scicluna and Msgr. Bertomeu, stressing they would be at the “disposition of all those who want to share their experiences or to receive direction or assistance.”

With the onset of the COVID-19 pandemic, the visit was officially “postponed” and has yet to materialize. Sources in Mexico have told Angelus that, despite coronavirus being the official reason given, several Mexican bishops had traveled to Rome and asked Pope Francis and Archbishop Coppola’s bosses at the Secretariat of State to cancel it all together — and to remove Archbishop Coppola, too.

Crux reported at the time that an estimated 50% of bishops in the country are believed to have mishandled abuse allegations, and some continue to do so today.

Among those who acknowledge cover-up on the part of Mexican bishops is Archbishop Rogelio Cabrera López, president of the bishops’ conference. In late 2019 he told a seminar organized by CEPROME that “we bishops need to acknowledge the mistakes of the past: We weren’t conscious of the seriousness of the issue, and the solutions we gave weren’t the right ones.”

Archbishop Coppola has been the other voice sounding the alarm, telling journalists that many bishops in Mexico had covered up for the “psychological murder” that is abuse. Coincidently or not, three weeks before his transfer to Belgium was announced, he told reporters that a dozen bishops were being investigated for cover-ups, and that out of 328 allegations of sexual abuse, 134 priests had been found guilty and removed from the priesthood.

Some observers believe he knew the reassignment was coming at the time of the remarks, while others claim a group of Mexican bishops cited the interview as a “last straw” to justify his removal.

During the past five years, Archbishop Coppola has been seen as an ally of abuse survivors and of journalists. But sources in the Vatican interpreting his dismissal said the successful push to send the diplomat packing was thanks to one ironic flaw expertly exploited by the group of Mexican bishops who lobbied for his transfer: his lack of diplomacy.