Venezuelan priests in LA look for ways to help homeland

Only seven months ago, Father Miguel Acevedo was the pastor of the Church of Nuestra Señora de la Candelaria, in Caracas, where he was in daily contact with the misery and hunger that is gripping large swaths of the population in Venezuela and the political tension that divides that country.

Acevedo is now in Los Angeles, where he is associate pastor at St. Paul’s Church in Mid-City. Lately, he and fellow Venezuelan priests serving in the Archdiocese of Los Angeles have been considering ways to help those in need, their brother priests included, who remain in the country.

“Above all, hope is something that all priests can and should offer their parishioners, so we want to mobilize to do things that will help our colleagues keep that hope alive,” Acevedo said in an interview with Angelus News.

“Sadly, in Venezuela, many priests don’t even have enough to sustain themselves. As for the population there, we know very well what the greatest needs are: attention to vulnerable groups such as the elderly, children, and pregnant women,” he added.

Acevedo is one of a handful of local Venezuelan-born priests who have recently begun to meet in light of their country’s deepening political and economic crisis. There were six of them when they met earlier this year, but Father Carlos Villasmil, who had recently arrived from Maracaibo, Venezuela, to St. Emydius Church in Lynwood, died suddenly in August.

Two years ago, Father Alexander Hernandez went from being a pastor in the once-privileged area of Caracas of “El Cafetal” to being an associate pastor at Epiphany Church in South El Monte.

“In my last parish [in Venezuela] the collection was not even enough to buy a light bulb. How can a priest survive in this situation? They also need to eat,” added Hernández, who said he finances a fund to help 150 needy children in Cota 905, an impoverished sector of the city of Caracas battered by serious violence and misery. 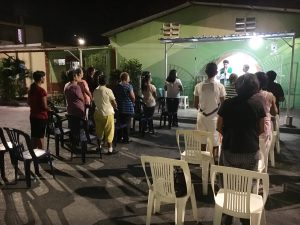 Faithful attend an outdoor Mass in Caracas in 2016. Venezuela's deepening economic crisis prompted Catholics to turn to the church, which does not have enough donations to help everyone. (Courtesy Father Juan J. Molina/Catholic News Service)

In interviews with Angelus News, the priests explained how the exodus of Venezuelans from their country has left behind many fragmented families, unprotected elderly, wandering homeless, and people who come to parishes asking for medicines and clothes.

The plight of the Venezuelan priests attracted the attention of Los Angeles Archbishop José H. Gómez, who made a point of meeting personally with the small group for the first time in May 2019.

“First we had a meeting with Archbishop Gomez and then the archdiocese connected us with a local Catholic Relief Services (CRS) contact and some ideas came out,” Acevedo said. “There is the possibility of organizing activities in the communities where we serve and also draw on a fund from the Archdiocese of Caracas to help priests who are going through great calamity through the use of intention Masses.”

Archbishop Gomez said he is very concerned about the situation in that country.

“I wanted to listen to their concerns and any additional information [the Venezuelan priests] could share, and personally express my attention to the issue, and to support them,” Archbishop Gomez said.

As a follow-up, Archbishop Gomez arranged for a representative of CRS to meet with these priests to explain how CRS, a service of the U.S. Conference of Catholic Bishops, is offering humanitarian aid to the people of Venezuela.

At that second meeting, the priests spoke with that CRS representative, Sergio Lopez. The Venezuelans are one of the main migration groups that CRS targets for its assistance programs. Through the Catholic aid agency Caritas, aid is sent not only to Venezuelans inside the country but to those outside as well: food, shelter, medicine, and legal assistance to refugees is finding its way to Venezuelan refugees in countries including Colombia, Trinidad & Tobago, and Brazil through the partnership.

Meanwhile, some of the priests have seen their countrymen and women reaching areas of California, where historically it was more common to find immigrants from other countries.

Father Rolando Sierra is a Venezuelan-born priest who serves as an associate pastor at St. John Neumann Church in Santa Maria and Our Lady of Guadalupe Church in the nearby town of Guadalupe.

His parish is in an agricultural area, where many Venezuelan immigrants have come recently to work the fields there, he said.

“People come here because they know there’s always work; it’s very hard to see many countrymen who come with university degrees and now are picking strawberries,” explained Sierra, who arrived from Venezuela in 2006 and is among the longest-serving Venezuelan priests in Los Angeles.

When the new arrivals learn that there is a Venezuelan priest in the local parish, they come straight to his Mass.

“They show up and tell me, Father, I am from Maracaibo or Maracay or Merida or Caracas. Sometimes they want to talk and relieve the pressure they bring from Venezuela.”

Like the other priests from the country who are now overseas, and like many Venezuelans in general, Sierra helps family members back home financially. In his case, he partners with his aunt to invest some of the money in offering a “solidarity pot” in his old parish of Maracaibo, Venezuela.

“It’s a soup that feeds a hundred people at a time,” said the priest. “It’s not much, but at least they can eat regularly on Tuesdays, Thursdays, and Saturdays.”

In Sierra’s parish, Venezuelan priests with U.S. visas are also sponsored to come help the church for a short time — one or two months — and thus receive their stipends.

This is increasingly difficult because they not only need the permission of the archdiocese, but also that of their respective bishops in Venezuela, who are sometimes reluctant to give it because they fear their priests won’t come back.

Father Ever Quintero, pastor of St. Columbkille Church and Nativity Church in South LA, believes it would be much more effective to pressure international organizations to take stronger positions on the situation in Venezuela.

“I told the archbishop myself: It’s not a question of money. Venezuela is in the hands of a dictatorship that manipulates institutions, plays with people’s dignity, and puts people in jail and changes places without warning their families,” said Quintero, who left his country in 2005 from the state of Táchira, in the Andean region, one of the areas hardest hit by scarcity of resources.

Quintero is concerned that any economic aid that may be sent to Venezuela will be undermined and that the government will confiscate resources or products.

“The game is locked,” Quintero said, using a common phrase in the dominoes game to indicate that the game can no longer proceed. “The government even went so far as to block aid from Caritas at some point. There can be no effective help with this regime in charge.”

In Venezuela, Church leaders and even some priests like Acevedo have been under the government’s surveillance.

If they dare to speak critically from the pulpit or to someone in the parish about the government and the situation of the country, the so-called “Law against Hate” is applied to them and they are called to sit down with government officials to question why they are promoting this “hate.”

As their country’s situation continues to worsen, the priests will continue to meet to discuss ways in which they can help out more effectively.

“I feel there’s a reason all of us are here, in this country, in this diocese. We can build bridges between our beloved Venezuela and all kinds of help, including prayer, which we constantly do,” said Hernandez.

“The idea that a mother church can help poorer churches is part of our theological reflection, and this is what we can do.”