As the Vatican foreign minister met with officials in Belarus, the chairman of the U.S. bishops' Committee on International Justice and Peace urged prayers for Belarusians during their sociopolitical crisis.

Archbishop Paul Gallagher, Vatican foreign minister, met with Belarusian Foreign Minister Vladimir Makei in Minsk Sept. 11. The Vatican said Archbishop Gallagher also would meet with church leaders and was in the country as a sign of Pope Francis' concern and closeness to the people.

Belarus has been in a state of social upheaval since the government announced that President Alexander Lukashenko, in power since 1994, had won reelection Aug. 9. 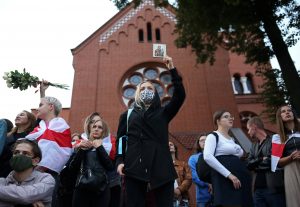 A woman hold an image of Mary and the Christ Child in front of Sts. Simon and Helena Church in Minsk, Belarus, Sept 1, 2020, during a protest against presidential election results. (CNS photo/Tut.By viaReuters)

Since then, the country's main opposition leaders have been forced into exile. Thousands of people have taken to the streets in protest, and church authorities confirmed Catholic clergy and laypeople had been beaten and jailed. Police also barricaded Sts. Simon and Helena Church and, hours later, arrested protesters who had sought refuge there as they exited the building.

In a letter read in Catholic churches Aug. 30, Minsk Archbishop Tadeusz Kondrusiewicz warned of impending civil war. The following day, he was refused reentry into the country and has been residing in Poland since. The archbishop -- a Belarusian citizen -- has sought legal advice about his situation.

On Sept. 11, Bishop David J. Malloy of Rockford, Illinois, chairman of the U.S. Conference of Catholic Bishops' Committee on International Justice and Peace, noted the situation "continues to be tense."