U.S. bishop with a Salvadoran heart weighs in on historic beatifications

As El Salvador gets ready for four beatifications Jan. 22, a U.S. bishop who spent time as a missionary in the Central American country said there's a lot to glean from lives of the four martyrs from the tiny nation.

"If we are truly followers of Jesus, then their beatification gives us a direct example of what it looks like to love without counting the costs," Bishop Ronald A. Hicks of Joliet, Illinois, told Catholic News Service Jan. 18. 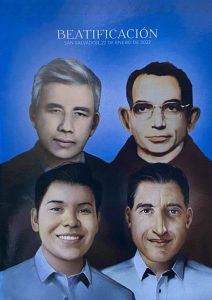 The four being beatified are: Franciscan Father Cosme Spessotto; Jesuit Father Rutilio Grande, who was martyred along with Manuel Solórzano, a sacristan in his 70s; and Nelson Rutilio Lemus, a boy in his teens.

The sacristan and the teen rarely left Father Grande alone, even when they knew his life was in constant danger.

Father Spessotto, an Italian missionary who had lived in El Salvador for almost 30 years, was shot point-blank in the head as he prepared for Mass June 14, 1980. He had denounced the March 1977 killing of Father Grande and his companions as well as the assassination of then-Archbishop Oscar Romero, with whom he would share the same fate months later.

Known as the "wine friar" because he was teaching his flock of Salvadoran farm workers how to grow and harvest wine grapes as they did in his native Italy, Father Spessotto also was a fierce defender of the rural poor of the region where he served in San Juan Nonualco.

Defending the poor was the same reason Father Grande was shot in from the front and the back, killed by more than 12 bullets with Solorzano and Nelson Rutilio in the car.

Father Spessotto had dealt with the attempted occupation of his church by soldiers, who also had detained priests inside, and ended up ordering them to leave. But he also advocated for catechists and church ministers who had been threatened by soldiers who accused them of being subversive because they were spreading the Gospel.

Mass killings and disappearances of such ministers and other members of the church was common back then. They came to include the killings of missionary Catholics from abroad, including four women from the U.S. -- three of them nuns -- who were killed Dec. 2, 1980, in a northern province of El Salvador.

Bishop Hicks, who, as a priest for the Archdiocese of Chicago, worked on a mission project in the province serving abandoned children, said anytime people visited him in El Salvador, he would take them to the "holy sites."  That's what he calls the places where priests, religious men or women, and laity were brutalized before and during the country's civil war from 1980 to 1992.

During that time, he came to know of the life of St. Romero, who "quickly became one of my heroes," and of the life of the country, particularly for the poor, during the war, he said.

When he became a bishop three years ago, he placed a sprig of rosemary in the middle of his coat of arms, a homage to El Salvador's St. Romero, whose last name translates into English as "rosemary."

It also is a symbol of his love for the people of El Salvador, a place where he said he was "humbled by the faith of the people."

"If I learned any lessons, it was mostly to not lose hope, to have faith, to never give up and to realize through everything, through the good and the bad, that we are not abandoned: God is with us," he said.

That's what fueled priests such as Father Grande, who knew his denunciations against the government, against the rich, for killing and oppressing the rural poor, including the two parishioners he was killed with, were not in vain.

Like Father Spessotto, Father Grande denounced the deteriorating social fabric of the country, the chasm between rich and poor, the exploitation of the working classes and farmworkers, the lack of education or opportunities for the children of the poor, and the persecution of church members who embraced a life of dignity for all.

Those aren't problems that went away even after the war ended.

"I think it's easy to think that the civil war ended decades ago, yet there's still so many challenges and hardships in El Salvador," Bishop Hicks said.

However, Catholic Salvadorans and in the universal church will have new examples "of how to put our faith into action, not thinking of just our self, of our own comfort, but constantly looking for ways of helping those who are in need," Bishop Hicks said.

And though not all will be missionaries to a foreign country, like Father Spessotto, or a champion for the rural poor like Father Grande, the two lay martyrs offer a lesson that fits the mission of any Christian.

"For me, I've always lived in a spirit that as a baptized Christian, we are all called to missionary work,," Bishop Hicks said. "Some of us leave our homes to be missionaries, like I did, like Father Cosme did, but all of us are called to have a missionary heart of love and of service, be it abroad or at home.

"The fact is, we just have to move from just thinking of our own self and our own issues and have the spirit of serving others and being conscientious of those around us, basically loving our neighbor."