More than 8,000 young Catholics from the United States prayed together Tuesday on the Mount of the Beatitudes, where Jesus is believed to have delivered the Sermon on the Mount.

Patriarch Pierbattista Pizzaballa, the Latin Patriarch of Jerusalem, led the American Catholics in prayer on July 19 during a vocational meeting organized by the Neocatechumenal Way, a movement in the Church that provides an itinerary of Catholic formation. 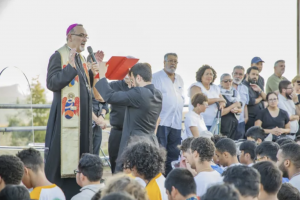 Patriarch Pierbattista Pizzaballa praying with young Catholics on the Mount of Beatitudes on July 19, 2022. (Courtesy Neocatechumenal Way via CNA)

As part of the vocational meeting, the young people are participating in a multi-day pilgrimage exploring the historic sites of the Holy Land.

“This pilgrimage marks a moment of hope and closeness to the people of the Holy Land,” Father Rino Rossi, rector of the Domus Galilaeae on the Mount of the Beatitudes said.

“The presence of these young people, who  have sacrificed comfort, summer vacation plans, and so many other things to come to this place  is a sign that the Church is truly alive.”

Domus Galilaeae is a Christian formation and retreat center located on the Mount of the Beatitudes administered by the Neocatechumenal Way. Pope John Paul II visited the center during his Jubilee pilgrimage to the Holy Land in 2000.

The youth gathering on July 19 marked the sixth anniversary of the death of Carmen Hernández, who co-founded the Neocatechumenal Way with Kiko Argüello in Spain in 1964. A request was made to open the beatification cause of Hernández last year. 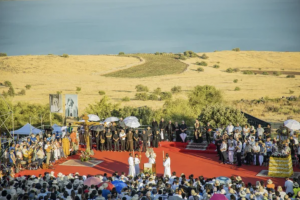 The Neocatechumenal Way draws its inspiration from the practices of the early Church, providing post-baptismal Christian formation in some 40,000 small, parish-based communities. The movement is present all over the world, and says it has an estimated membership of more than 1 million people.