(CNA) - On the night of July 10, 1989, four men crawled through a window of the Montarioso Catholic Seminary museum, bypassed an armored door through a hole in a wall, and came away with a medieval gilded crucifix, six silver chalices, and a 14th-century reliquary of St. Galgano.

The sacred objects had been forged by goldsmiths in Siena and Rome and held for hundreds of years in the Abbey of San Galgano, famed for a sword in a stone said to have been thrust there by the knight-turned-saint Galgano Guidotti.

The 11 stolen items remained missing for more than three decades, until recently, when a raid by the Sicilian unit of the Carabinieri Tutela Patrimonio Culturale, which specializes in recovering stolen art, found them among 40 illegally obtained items in the home of a collector near Catania, Sicily.

Barbara Jatta, director of the Vatican Museums, hailed the rediscovery of the more than 600-year-old reliquary as “a nearly unprecedented find.” 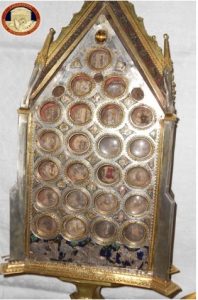 The San Galgano reliquary, stolen in 1989. (Courtesy of the Carabinieri Tutela Patrimonio Culturale in Palermo)

The Vatican Museums will spend the next six months restoring the items in its Metals and Ceramics Restoration Laboratory due to significant damage to the reliquary that occurred after the theft.

“It is a nearly unprecedented find for the importance that these reliquaries and objects have, not only from a historical-artistic point of view but also a devotional point of view,” Jatta said at a press conference on April 26 to announce the discovery.

“We are still waiting to receive this reliquary, which we will treat not only professionally, from the point of view of conservation, restoration, and maintenance, but also with the devotion that this kind of work deserves,” she said.

St. Galgano Guidotti was a 12th-century knight from Tuscany who had visions of St. Michael the Archangel and became a hermit in Montesiepi, outside of Siena, near where the ruins of the Abbey of San Galgano now stand. He was canonized in 1185 by Pope Lucius III.

The reliquary with accompanying objects, including a copper cross and six silver chalices.

Ten of the 11 items stolen from the Archdiocese of Siena-Colle di Val d’Elsa-Montalcino in 1989, which also included two pixes (small containers used to carry the Eucharist), were recovered in Sicily by the Carabinieri Tutela Patrimonio Culturale (TPC). 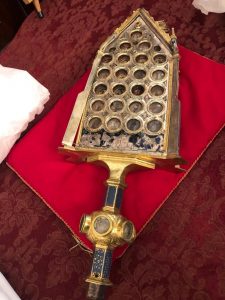 (Courtesy of the Carabinieri Tutela Patrimonio Culturale in Palermo)

The police force, spread throughout Italy, uses a database of 1.5 million stolen artifacts to identify art that was obtained illegally, according to The Art Newspaper. The police recovered more than 900,000 stolen items in 2019, with a combined value of more than $124 million.

Dario Franceschini, Italy’s Minister of Culture, praised the Carabinieri TPC at the press conference for their “excellence recognized all over the world.”

After they are restored by the Vatican Museums, the reliquary and other sacred objects will be returned to the Tuscan archdiocese.

The perpetrators of the theft, three Sicilians and one Tuscan man, were arrested by local police shortly after the items went missing, but the Carabinieri TPC has yet to confirm who commissioned the theft.

A silver chalice dating back to the 17th century that belonged to the Siena’s Certosa di Maggiano monastery remains missing.