ROME — When his remarks to a group of Jesuit-run media editors in May were published on June 14, Pope Francis handed journalists a few eye-popping headlines. He acknowledged that Russia might have been “provoked” by NATO into invading neighboring Ukraine, stated that World War III has already been declared, and called President Vladimir Putin’s soldiers “cruel.”

He also spoke of things that were ignored by journalists in favor of more “pressing” issues, including his lamentation that the war in Ukraine is getting more attention “because it is closer to us and touches our sensibility more.”

In explaining his belief that World War III is already underway, he made a point of naming other conflict-stricken countries.

“Let us think of some parts of Africa, the north of Nigeria, the north of the Congo, where a war is still going on and nobody cares. Think of Rwanda 25 years ago. Think of Myanmar and the Rohingya. The world is at war.”

Indeed, Catholics are suffering in places that don’t garner the same headlines as Ukraine. Why did Pope Francis name these three?

The country Pope Francis visited in 2017 has long been in political turmoil, and the situation has been deteriorating rapidly since 2015, following the military’s crackdown on the Muslim Rohingya population, which has forced tens of thousands into exile.

During his visit, Pope Francis was asked why he didn’t listen to the advice of Cardinal Charles Bo of Yangon, who asked him to refer to the Rohingya crisis and the military’s general abuses against human rights, without using the “R” word. The reasons behind the prelate’s appeal were many, including the survival of the Christian community that, as a minority, has also long been threatened.

The pope eventually used the word Rohingya in Bangladesh, and told journalists that even though he hadn’t used it in Myanmar, “everyone knew” what he was referring to when he urged authorities to respect human life.

The situation in the country for Christians has greatly deteriorated since then. Myanmar’s military junta is accused of targeting churches and church-run institutions in recent months. Dozens of churches in the Kayah and Chin states have been destroyed in airstrikes and artillery shelling while thousands of people, including Christians, have been displaced, some fleeing into neighboring India. At least 450 homes were set ablaze by junta troops in two historic Catholic villages in recent weeks.

The destruction recently prompted Myanmar’s bishops to issue yet another statement demanding respect for human life and the sanctity of places of worship, hospitals, and schools in the conflict-torn Southeast Asian nation. 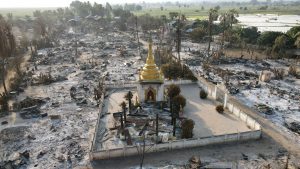 More than 1,900 people, including more than 100 children, have been killed and an additional 14,000 detained since the February 2021 military coup.

Though several governments, including the Biden administration, have acknowledged that the attacks on the Rohingya amounted to genocide, the international community has largely remained silent on the ongoing human rights violations by the military.

Africa’s most populous nation is home to the sixth largest global Christian population: virtually half of its 190 million inhabitants identify as followers of Christ.

And yet Nigeria is in turmoil, with violence stemming from sectarian differences and poverty among other causes. For the past decade, the Islamist terrorist group Boko Haram has been terrorizing the northern region of the country, targeting Christians.

Now, evidence shows the group has joined forces with what Archbishop Matthew Man-oso Ndagoso of Kaduna described as “bandits” to sow fear throughout the northwest region. This “old trade for some evil men,” he said in late May, has devolved, with bandits replacing “bows and arrows” with the semi-automatic weapons that arrived after the fall of Libya’s Muammar Gaddafi in 2011: “When he was overturned, guns were everywhere. With $200 U.S., you could get an AK-47.”

Though the religious violence against Christians has been mostly contained in the northern region, there has been a growing wave of attacks — particularly in the form of kidnappings — against them in other parts of the country. The targets are usually priests or pastors, as the mafia-like organizations behind these crimes think they are more likely to get ransom payments for them.

A ghastly sign that the danger is expanding came on Pentecost. At least 40 people were killed — and a priest and several faithful kidnapped — when gunmen opened fire and detonated explosives during Sunday Mass on June 5 in the town of Owo. The fact that the massacre happened in southwestern Nigeria — far from the more dangerous north — suggests that anti-Christian violence may be entering a new stage in the country.

Far from being a Church on the margins numerically, Nigeria’s is becoming a martyred one.

Pope Francis was scheduled to visit the Democratic Republic of Congo (DRC) in early July, but the trip was postponed due to complications with his right knee. Doctors advise surgery, but thus far, he has refused.

Though most of the trip’s preparation focused on South Sudan and the pope’s efforts to forge peace there, the DRC has 5.6 million internally displaced people, the most in Africa, according to United Nations’ figures. Clashes between the country’s army and the M23 rebel group have displaced almost 2 million people in North Kivu.

The cancellation does not mean Pope Francis is forgetting about the country any time soon. An increase in violence over the last month there has prompted the U.N. to plead for “urgent action” in the country. On July 3, the day he was scheduled to celebrate Sunday Mass in Kinshasa, Pope Francis will instead welcome Italy’s Congolese community for one in St. Peter’s.

Though anti-Christian persecution in Congo has even less press coverage than in Myanmar and Nigeria, this country is far from being free of religious-based violence. There are sporadic — almost monthly — outbreaks against Christians as part of the ongoing Kivu conflict.