Pope Francis has once again put himself into Argentina’s ongoing debate on legalizing abortion, this time through a letter to a priest who lives and works amongst the poorest in the slums that plague Buenos Aires.

“For me the deformation in the understanding of abortion is born mainly in considering it a religious issue,” said the private letter from Francis to Father Pepe Di Paola.

“The issue of abortion is not essentially religious. It is a human problem prior to any religious option,” the letter continued. “The abortion issue must be addressed scientifically.”

The priest noted that “scientifically” was underlined by the pope.

“Francis emphasizes this to me because he maintains that many believe that ‘no to abortion’ is rooted in an opinion and not science,” Di Paola said.

The priest’s friendship with the pope goes back decades, when Francis was still archbishop of Buenos Aires and Di Paola a recently ordained priest. 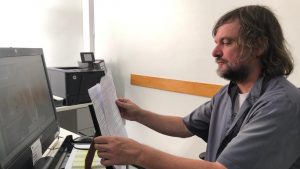 Argentina Father Pepe Di Paola, who lives and ministers in the slums of Buenos Aires, addressing a virtual session of the Argentine Congress during a debate to legalize abortion, Dec. 1, 2020. (Courtesy of the Movement of Slum Priests via Crux)

President Alberto Fernandez introduced a bill in November to make abortion “legal, free, and safe,” across the nation.

The proposed legislation doesn’t include provisions for institutional conscience objection, which could force Catholic hospitals to either perform abortions or be closed.

Last week, the pope sent a hand-written letter to a network of mothers who live in the slums of Buenos Aires, who had asked him to be their voice in an ongoing debate.

After quoting Francis’s letter, Di Paola noted that science is able to read the entire sequence of an unborn baby’s DNA long before birth, and that this has led to “the capitalist countries that approved abortion” purging “90 percent of unborn children with Down syndrome with a Nazi mindset.”

Di Paola said that those who minister in the slums have learned from their neighbors “to love and take care of life,” and that the bond of love generated among the poorest give evidence to the fact that “every life has value.”

“On the other hand, we saw the hypocrisy of our society that denies the poor the possibility of adoption for not having, for example, a property title,” Di Paola said, referring to Argentina’s adoption system.

The priest also warned that after legalizing abortion, the next step is “the elimination of the elderly disguised with the euphemism of a dignified death, ‘consummating the exclusion of the weakest.”

“Deputies and senators: don’t put yourself in God’s place, let science speak seriously, rule for the poor and not for the enlightened capitalist elites, Di Paola said. “Let us all make a country where life is loved, a country where the Pope can feel comfortable when he decides to come.”

After being mostly silent during Argentina’s 2018 abortion debate, the Argentine bishops conference is taking a more vocal role, with bishops denouncing the “hypocrisy” of trying to legalize abortion in a year when Fernandez asked Argentinians to “stay home to save lives” during the COVID-19 pandemic,

Among other initiatives, they’re inviting all Argentines to pray “for the unborn life” on Dec. 8, the feast of Mary’s Immaculate Conception.

Gines Gonzales Garcia, the country’s health minister, is one of the biggest proponents of the bill. During his remarks on Tuesday, he called abortion a “public health issue,” and said what’s being debated is if terminations are performed “safely or clandestinely.”

“Here there are not two lives as some say,” the health minister said, making reference to the slogan of the pro-life campaign in Argentina. “There’s clearly a single person and the other [thing] is a phenomenon. If it were not like that, we would be facing the greatest universal genocide, [because] more than half the civilized world allows it.”

The debate will continue throughout the week, and Fernandez hopes deputies will vote on it by Dec. 10. The bill could still be rejected by the Senate, as it was in 2018.