ROSARIO, Argentina — As most of Europe and some places in the United States start to re-emerge from the coronavirus (COVID-19) pandemic lockdowns, most of Latin America is only now seeing the numbers grow. As the crisis worsens, it’s also put a spotlight on church-state relations in the world’s most heavily Catholic region, for both good and ill.

Latin America recently surpassed Europe in the daily number of reported coronavirus cases, putting the region at the center of the global outbreak.

To date, Brazil has confirmed nearly 375,000 cases, second only to the United States, with more than 24,000 deaths from the coronavirus as of May 26, according to a Johns Hopkins University tally. Brazilian President Jair Bolsonaro has been openly hostile toward coronavirus restrictions, calling the virus “a little flu.”

Yet this country is far from being the only one in Latin America where numbers are growing. The pandemic is rapidly escalating in Peru, Chile, El Salvador, Guatemala, Nicaragua, and even in Argentina, despite strong restrictions put in place back in March 20, just 17 days after the first case and when there were fewer than 250 people infected at the time.

In addition, living in conditions of poverty makes the virus four times more deadly than being more than 65 years old. This is a concerning statistic in a continent where the average age is lower than in Europe, but that has 31.8% of the population currently poor and 11.5% living in extreme poverty.

In Pope Francis’ country this statistic is no longer a warning but a reality: 90% of total cases are in the Buenos Aires metropolitan area, and of those, 40% from the slums that are both the beating heart and the outskirts of the capital city.

Governments in the region have responded quite differently. Representing one extreme is President Daniel Ortega of Nicaragua, who has refused to close schools and even advised people to go out, claiming that the country is stronger than the virus. He has openly challenged the Catholic Church, closing down initiatives by individual bishops of setting up makeshift isolation centers.

The relationship between church and state has long been a strained one in this country, but has worsened since a civil uprising in 2018 that saw Catholic churches across the country becoming literal “field hospitals” to tend to the hundreds wounded during clashes between young people protesting a reform to the social system, the army, and government-funded militias. 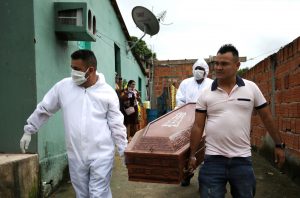 The relative of a person who died of the coronavirus (COVID-19) and funeral workers wearing protective clothing and masks carry the victim's coffin in Manaus, Brazil, May 7. (Catholic News Service/Bruno Kelly, Reuters)

Nicaragua is the second poorest country in the Americas, with more than 6 million people, most of whom live under the poverty line. But in the words of Bishop Silvio Baez, auxiliary of Managua forced into exile due to the threats to his life, it’s also a nation where the Catholic Church is strongly sacramental and “traditionalist,” but also extremely close to the people, with a voice considered relevant and respected.

During the protests, the Church found itself in a complex situation, Bishop Baez argued, with more than 400 dead, thousands disappeared, and others tortured in prison, with even more people forced into exile.

“Those who were being attacked and murdered were people of our parishes, of our communities, and they came looking for our support, for words of comfort, and above all, for protection,” he said. “We opened the churches, and we tried to tend to those wounded.”

At the same time, Ortega asked the Church to mediate in an effort at national dialogue, so the bishops found themselves “in a very uncomfortable position: as pastors of our people, but also called to be impartial.”

This froze the relationship between the government and the Church, and according to Bishop Baez, the time since saw “the aggression, the persecution, the injurious attacks against the Church” continue.

This complicated relationship, worsened by Ortega’s unwillingness to acknowledge the danger of the new virus, has left the local church as an outsider when it comes to trying to help flatten the curve and address the social and economic crisis product of the epidemic, visible even in this country with no mandatory lockdown.

On the other extreme is President Alberto Fernandez of Argentina, who closed the country very early on — three days after Italy — and who has extended the quarantine until June 8, despite the country being once again on the brink of default. The original quarantine was set to buy the chronically underfunded health system as much time as possible to try to make the peak of the curve manageable.

The efforts largely have been successful, with the country having one of the lowest rates of contagion in the region. However, the extension of the lockdown is leading to social unrest. Even if the lockdown ends by June 8, which is not expected, Argentina will have had the longest quarantine in the world.

But Argentina represents the other extreme from Nicaragua not only in terms of the reaction to the pandemic, but also in the relationship between the government and the local bishops. Though there are many differences between the bishops and the Fernandez government, especially on social issues like the legalization of abortion, Church leaders have echoed the president’s argument that lives are more important than the economy.

“A life lost is lost forever, but the economy can bounce back,” is the Fernandez argument, which has been discussed ad nauseum by economics and TV commentators. Yet in the words of Cardinal Mario Poli, archbishop of Buenos Aires, on May 25, “We all know that defending the people means an economic meltdown. It would be sad if we opted for the opposite.”

As the slums of Buenos Aires are the worst hit both by the raising number of coronavirus cases and hunger, Bishop Gustavo Carrara, known as a “slum bishop” because he lives in the deprived areas of the capital, believes collaboration among parishes, social organizations, and government officials is more necessary than ever.

“I believe that as a country, we’ve put our focus on caring for the most vulnerable ones, and we have to continue doing so,” the bishop said.

“This pandemic has made everything we were lacking visible, particularly in the poorest sectors,” he said. “I believe that once this is over, we cannot continue organizing the city, the country, the world, as we have been doing thus far, leaving the most vulnerable behind.”