Iraq visit illustrates the papacy is about something bigger

It is one of the most iconic images of the year 2020: Pope Francis standing alone under the rain, a sole figure dressed in white against the dark backdrop of a rainy Roman night in an uncharacteristically empty St. Peter’s Square, praying for an end to the coronavirus pandemic on the day that Italy suffered its highest 24-hour death toll.

More than 17 million Italians, roughly a quarter of the entire national population, together with millions watching on their screens across the globe, were reminded that they were not alone during one of modern history’s darkest moments.

In a papacy characterized by the sometimes controversial statements and reforms that the Argentine pope has made, the livestreamed March 27 “Urbit et Orbi” blessing was a reminder that the Church, and the papacy itself, cannot be reduced to ideological disputes, but are really about something bigger.

Scheduled for March 5-8, almost one year to the date from when Italy implemented its strict nationwide lockdown, the visit came as a surprise to many, given that the COVID-19 pandemic is still out of control in many parts of the world, including Iraq, where case numbers have been on the rise.

Yet regardless of the possible risks, the trip has been praised by Catholics all over the spectrum. While there are concerns about the logistics of an 84-year-old man visiting a country with a fragile health care system during a pandemic, the overwhelming sense is one of admiration for a gesture which, despite the risks, will honor a crippled nation with a battered Christian community.

Somehow, against the symbolic backdrop of what this visit means for persecuted Christians in Iraq, the political questions have fallen aside.

Speaking to journalists during a Dec. 15 virtual media roundtable, Archbishop Pierbattista Pizzaballa, patriarch of Jerusalem, called the pope’s decision to visit Iraq “courageous,” both because of the complex political climate and the pandemic.

Noting that infection rates are increasing in Iraq, which has recorded more than 576,000 total cases, Archbishop Pizzaballa noted that even though vaccines are being rolled out, “it’s not like by March everyone will be vaccinated.”

Though he doesn’t know the details of how the pope’s visit will be organized, Archbishop Pizzaballa said regardless of the circumstances, “it will be a wonderful symbol for a community who since the ’90s, for 30 years, have been under immense pressure.”

Until the Gulf War and early 1990s, Iraq was a reasonably wealthy country, with a large and growing middle class, many of whom were Christians. 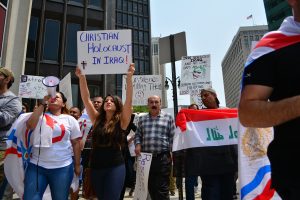 Protesters display signs and carry flags during a 2014 protest in Detroit, calling on the U.S. to intervene in the persecution of Christians in Iraq. (CNS photo/Mike Stechschulte, The Michigan Catholic)

In 2003, there were an estimated 1.4 million Christians living in Iraq. Today, the number is believed to be under 400,000, after years of war and a bloody campaign by the Islamic State marked by widespread killings, forced conversions to Islam, and violence pushing Christians to flee their cities under pain of death.

Given the country’s ongoing political instability and the continual threat Christians face, many young people and young families, in particular, are choosing to migrate, provoking fear that if current trends continue, it’s only a matter of time before Christianity disappears from the region entirely.

Facing this prospect, organizations and institutions from all sectors of the Church in recent years have rallied together to support Christians in Iraq, and throughout the Middle East.

When all is said and done, when the pope’s trip is already in the rearview mirror, it’s likely conversations about whether or when he wore a mask or used hand sanitizer during public events, how the events were organized, or what attendance restrictions looked like will be short-lived.

Instead, it’s safe to expect that what most people, and Iraqis in particular, will remember is that their pope, the vicar of Christ on earth, came to them in their hour of need.

They might not even remember what Pope Francis says, but the sight of him praying in a church charred and graffitied by ISIS soldiers, or standing in the rubble of what was once the home of a Christian family, or giving his blessing to people who lost everything in order to keep their faith, will be etched into their minds, and that image will stay forever.

The old adage that “a picture is worth 1,000 words” might be a touch cliché, but never has it rung truer than in moments like this, when Catholics forget about partisan divides for a moment, and remember what the papacy is really all about.