In Slovakia, Pope Francis calls for freedom in both civil society and Church

Speaking to the civil authorities of Slovakia, a country that for decades was under one-party Communist rule, Pope Francis warned against the “single-thought” system of consumerism and ideological colonization.

“In these lands, until just a few decades ago, a single thought-system stifled freedom,” Francis said. “Today another single thought-system is emptying freedom of meaning, reducing progress to profit and rights only to individual needs. Today, as then, the salt of the faith acts not by reacting in worldly terms, by engaging in culture wars, but by quietly and humbly sowing the seeds of God’s kingdom, especially by the witness of charity.”

The pontiff also said that it’s his hope that Slovaks won’t allow the rich “flavors of your finest traditions” to be ruined by the “superficiality of consumerism and material gain. Or by forms of ideological colonization.”

Though he didn’t go into specifics, Francis has often used the term “ideological colonization” to refer to issues pertaining the family and life, including abortion and euthanasia.'

The pope’s words came Monday after a private meeting with President Zuzana Čaputová, a 48-year-old mother of two who became the youngest president in the history of Slovakia in 2019. 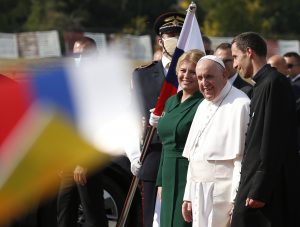 During his remarks to civil authorities and the diplomatic corps, Francis made the point of supporting the European Union as nationalistic sentiments fueled by populist leaders grow particularly in the countries of the Visegrád group – Hungary, Slovakia, Czech Republic and Poland.

Čaputová is an exception, and in her remarks warned against populism, national selfishness, fundamentalism and fanaticism, and the exploitation of religion for political objectives.

The leader of a nation that is at the heart of Europe, surrounded by countries such as Poland and Hungary that often resort to pro-Christian messages to ban Muslim refugees from the Middle East, she underlined that any form of anti-Semitism and religious intolerance is irreconcilable with Christianity.

In his remarks, Francis said fraternity is necessary for the “increasingly pressing process of integration.”

“All the more so, in these days when, after long and trying months of pandemic, fully conscious of the difficulties to be faced, we look forward with hope to an economic upturn favored by the recovery plans of the European Union,” he said.

However, the pontiff added, this cannot mean succumbing to impatience and the lure of profit.

Economic recovery, he argued, is not in itself sufficient in a world that is currently itself “a crossroads, in which all are interconnected.”

The pontiff said Slovakia is called to be “a message of peace in the heart of Europe,” particularly as “battles for supremacy are waged on various fronts.”

“May this country reaffirm its message of integration and peace,” he said. “And may Europe be distinguished by a solidarity that, by transcending borders, can bring it back to the center of history.”

To the Catholic hierarchy: The center of the Church is not the Church

After his meeting with the country’s civil authorities, he addressed the Slovakia’s Catholic leaders. 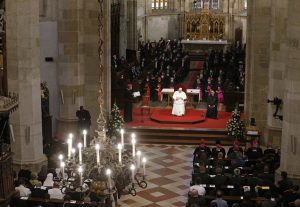 “Living within the world means being willing to share and to understand people’s problems, hopes and expectations,” he said during a meeting with the bishops, priests and religious men and women in Bratislava’s Cathedral of St. Martin. “This will help us to escape from our self-absorption, for the center of the Church is not the Church!”

He urged those present to leave behind the “undue concern for ourselves, for our structures, for what society thinks about us,” and instead become immersed in the lives of peoples and try to address their spiritual needs and expectations.

Answering his own question as to what people expected, he said freedom, creativity and dialogue.

Freedom, Francis said, is the key to humanity, as human beings were created free, and as Slovakia learned during the years of Communist rule, whenever freedom is attacked, violated or suppressed, humanity is disfigured and violence, coercion and the elimination of rights follows.

The Church too can fall into this temptation, believing it’s “better to have everything readily defined, laws to be obeyed, security and uniformity, rather than to be responsible Christians and adults who think, consult their conscience and allow themselves to be challenged.”

“A Church that has no room for the adventure of freedom, even in the spiritual life, risks becoming rigid and self-enclosed,” he said. “Some people may be used to this. But many others – especially the younger generations – are not attracted by a faith that leaves them no interior freedom, by a Church in which all are supposed to think alike and blindly obey.”

Speaking about creativity, Francis argued that faced with the loss of the sense of God and of the joy of faith, it is useless to complain and “hide behind a defensive Catholicism, to judge and blame the world. We need the creativity of the Gospel.”

Lastly, speaking about dialogue, he said that a Church that forms the faithful in interior freedom and responsibility is able to be creative by tapping into their history and culture, capable of engaging in dialogue with the world: “Those who confess Christ without being ‘ours.’ with those who are struggling with religion, and even with those who are not believers.”

Later in the day, Francis was scheduled to meet with representatives of Slovakia’s Jewish community and pay a visit to the Bethlehem center, run by the Missionaries of Charity, the religious order founded by Mother Teresa of Calcutta.