In Russia-Ukraine conflict, all roads run through Moscow

The last several weeks have seen Catholic officials call for a peaceful resolution to the escalating tensions between Ukraine and Russia, which has recently mobilized some 100,000 troops to their shared border.

At the weekly Vatican audience Feb. 9, Pope Francis repeated his hope that peace through dialogue would prevail, and said that war between the countries would be “madness.”

For the pope and Catholic bishops in the two countries, it’s the latest chapter in a diplomatic drama dating back to 2014, when Russian president Vladimir Putin first ordered an invasion of Ukraine following the toppling of its Moscow-backed government at the hands of pro-democracy and pro-European Union protesters. The overthrow led to the Russian annexation of Crimea in March 2014 and the declaration of independence from Ukraine by pro-Russian separatists in the Donetsk and Luhansk regions of the country.

The ensuing yearslong conflict in eastern Ukraine between separatist forces and the Ukrainian military has since killed more than 14,000 people and forced an estimated 1.5 million to become internally displaced.

Still, Putin insists that despite the troop movements, there are no plans for those 100,000 soldiers to cross the border. Diplomatic efforts are ongoing in a bid to defuse the possible crisis, though many countries, including the United States and the European Union, have already pledged military support for Ukraine.

But amid all the tension, Catholic leaders have found something surprising these days in the Church: a united chorus of voices warning against an invasion and effectively taking Ukraine’s side.

Major Archbishop Sviatoslav Shevchuk, head of the Ukrainian Greek Catholic Church, criticized Russia’s troop buildup as an escalation of the conflict “between Russia and the Western world, particularly the U.S,” and described it as “the culmination of a dangerous military escalation and aggression against Ukraine” ongoing for the past eight years.

“The escalation we are witnessing today is not simply a continuation of the war in Donbass, or a consequence of the annexation of Crimea,” he said Feb. 4 at a press conference organized by papal charity Aid to the Church in Need. 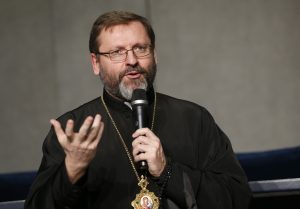 His message was clear: though his people are the ones taking the bullets, it would be naïve to believe that Russia’s ultimate goal is to simply reconquer Ukraine, which became independent in 1991 after the fall of the Union of Soviet Socialist Republics.

As a footnote, Pope Francis and Archbishop Shevchuk's relationship goes back to the early 2000s, when the latter first studied and then served as head of the Greek Catholic diaspora community in Argentina. The two have met several times in Rome, and the Ukrainian felt confident enough to correct the Argentinian when, early in his pontificate, he spoke of the Russian invasion of Ukraine as a “fratricidal war.” Ukrainians, he pointed out, see the aggression not as a civil conflict but a foreign invasion.

But they are far from being the only Catholic voices clamoring for peace in the region. In fact, as a rare occurrence in virtually anything Church-related, it is practically impossible to find voices in favor of Russia escalating the conflict.

There’s no “traditionalist vs. liberal,” “right vs. left,” or “pro-Europe vs. pro-Russia” battle song: the tune playing is only one, “Give Peace a Chance.”

Apart from the “Normandy format” talks taking place between Ukraine and Russia (with the help of France and Germany), the Vatican, too, is helping out, from a behind-the-scenes role, and exerting its ecumenical muscle more than the political one.

Amid it all, there’s been one telling detail common to Pope Francis’ statements on Ukraine throughout his papacy: He never mentions Russia.

In appealing for peace, he never addresses or names the aggressor, which until now continues to claim there are no plans for waging a war. By speaking only about Ukraine, Pope Francis has found a way to address the conflict and express his support and closeness to those who are suffering, while keeping an open door with Russia.

To think that the Argentine pontiff refers to anything other than Russia escalating the invasion when he calls for peace for Ukraine is like pretending he wasn’t speaking about the “Rohingya” when in Myanmar, where he condemned the ongoing genocide committed against this Muslim minority without actually naming them.

Seen through the lens of diplomacy, Pope Francis’ apparent unwillingness to call out the aggressor keeps the dialogue between the Holy See and the Kremlin, and that of the Catholic Church with the Russian Orthodox Church, open.

Judging solely on the basis of personality, Pope Francis and Putin may seem an odd geopolitical couple: One is a man known for compassion and peace, while the other is more prone to shoot first and ask questions later. Nevertheless, the two figures have forged an improbable strong partnership, particularly over the future of Christianity in the Middle East.

And there’s another reason why the pope refuses to poke the metaphorical bear that is Russia: Christian unity, a cornerstone of the last three popes. Orthodox Christianity, by numbers and theological similarities, has long been the first target of an eventual reconciliation.

Granted, Pope Francis’ main interlocutor in the Orthodox world tends to be the Ecumenical Patriarch of Constantinople, Bartholomew I, who’s sometimes seen as a rival to Moscow in terms of leadership.

Yet the pontiff is a realist: He knows full well that out of the roughly 225 million Orthodox Christians in the world, two-thirds of them belong to the Russian Orthodox Church, so when it comes to Christian unity, all roads run through Moscow. Preparations for a second meeting between him and Patriarch Kirill are ongoing.

Archbishop Shevchuk has said that a papal visit would put an end to the war. The question is, can diplomacy change the course of the conflict, allowing Pope Francis to visit Ukraine — which he has said he wants to do — while not severing his connections with Russia?