Hundreds of Christian families face eviction from their homes in Pakistan

Over the past week, the houses of 450 Catholic families were destroyed in Pakistan, and those of 1,000 Christians will be bulldozed by government officials in upcoming days.

The country’s Supreme Court ruled that the homes are on state-owned lands, and their presence makes the cities of Hyderabad and Karachi more flood-prone, since they block the path of rainwater to the sea.

The houses were first built 40 years ago and are legally connected to the public electricity, gas and water grids.

“This is a civic crisis side by side a human tragedy, and municipal authorities are responding to the civic crisis, but not to the human one,” said Australian Father Robert McCulloch, the Rome-based Procurator General of the Missionary Society of St. Columban. He lived in Pakistan from 1978 to 2011.

He told Crux on Tuesday that there has been a perennial encroachment problem in Pakistan, with people occupying government-owned land. This, he argued, has been a reality for the past 30 or 40 years, when people from the Punjab region moved towards the cities after the mechanization of agriculture led to a loss of jobs.

When people first began to arrive, Christians – mostly Catholics – began settling in fringes around the city, they settled in temporary shacks that eventually become permanent homes.

“There is no doubt that the land they’re on is encroached,” McCulloch said.  “But they have long been connected to the water and gas grids, which gave a sense of stability to the people living there. The fact that they were all paying taxes to representatives of the municipal council in their areas, either over or under the table, made them believe they had some sort of legal claim over the land.” 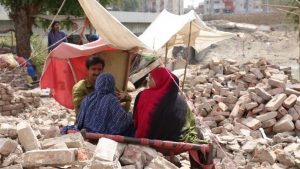 Dozens of homes were destroyed in Kali Mori, in the city of Hyderabad, in Pakistan, in mid-March, 2021. Thousands of Christians suddenly found themselves without a home after the Supreme Court ruled municipal officials had to free encroached lands both in Hyderabad and in Karachi. (Courtesy Eric Siraj via Crux)

He said the community saw government officials provide them with public services, and no one told them they were illegally inhabiting the land.

This continued for decades, until the homes became a liability: The land is very close to the canals that divert floodwater to the sea.

“Some 450 Christian families in a particular area that I know, lost their homes in the past 6 days,” the priest said. “And when they complained to the police and officials who were there to oversee the destruction, they were told that they were encroaching.”

McCulloch noted that no one has thus far told Pakistan’s Prime Minister Imran Khan that he too has built his mansion on encroached public land in Islamabad: “Encroachment is happening all over the country, but those who suffer are the ones who have no money” to pay off public officials.

The priest also said that in the coming week, there will be another 1,000 Christian families who will lose their homes, as the bulldozers and tractors continue to bring down the homes.

“Had they been told that they couldn’t settle and to instead go a little bit further out in the city, where there was available and fairly cheap land to buy, they would have done so,” McCulloch said.

Most of those who arrived back then didn’t know how to read and write, which made them more gullible and believe whatever civil authorities told them, the priest claimed. 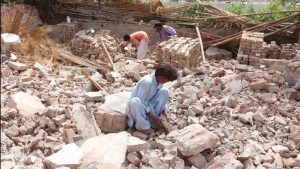 Dozens of homes were destroyed in Kali Mori, in the city of Hyderabad, in Pakistan, in mid-March, 2021. Thousands of Christians suddenly found themselves without a home after the Supreme Court ruled municipal officials had to free encroached lands both in Hyderabad and in Karachi. (Credit: courtesy Eric Siraj.)

“From their point of view, they asked if they could put their homes there and were told yes the minute they were told to pay taxes,” he said. “The people who enabled them charged them taxes instead of telling them not to build their homes there.”

Making an already bad situation worse, the thousands who overnight found themselves homeless are having trouble finding homes to rent both in Karachi and Hyderabad because the sudden increase in the demand is raising rates.

The situation is made worse by the fact that Christians in the Muslim-majority country are often treated as second-class citizens, meaning the government is not likely to do much to help those affected.

Through a hospital owned by the diocese of Hyderabad, McCulloch said he hopes to buy pieces of land that the Church can donate to the families affected, so that they can at least face rebuilding with the certainty they have title to the land.