Edwin Chow, 20, a native of Hong Kong, is in his third year of university, where he’s studying government and international studies.

But over the past year, has likely learned as much about both subjects in the streets of his home city as he has in the classroom.

Since June, Hong Kong Catholics like Chow, along with hundreds of thousands of their fellow citizens, have participated in widespread protests against the mainland Chinese government as well as rulers of semi-autonomous Hong Kong.

Chow just finished his term as president of the Hong Kong Federation of Catholic Students, whose 50 or so active members are decidedly pro-democracy, and have participated in demonstrations against the city’s government as well as China’s rulers in Beijing.

Chinese Catholics have held prayer vigils during the protests, organized information sessions about the movement and even extended material aid to protesters, Chow said.

He noted that even though Hong Kong’s Catholics are a minority, making up about 5% of the population, many of them, particularly younger Catholics, support the hundreds of thousands who have turned out for various events to publicly resist Hong Kong Chief Executive Carrie Lam’s administration.

On that note, hundreds of Catholics attended a special public service Oct. 26 in Hong Kong, where Auxiliary Bishop Joseph Ha Chi-shing asked people to pray the rosary daily as a form of nonviolent resistance, and repeated his previous calls for an independent commission to investigate government actions during the crisis.

The protests began over a law, proposed by Lam’s administration, that would have allowed extradition of Hong Kong citizens to the mainland by China.

Although that proposed law has since been withdrawn, Lam and Beijing have refused to budge on other protesters’ demands, including release of all arrested protesters and dismissal of charges of rioting as well as the establishment of universal suffrage.

Chow said that his fellow Hong Kongers, particularly younger people, simply don’t trust Beijing with their rights. The protesters also know they are largely on their own as they face off against a world superpower.

He added that he and other Hong Kong Catholics welcome any support they receive from the United States, including a bill, the Hong Kong Human Rights and Democracy Act, which the House of Representatives passed in September that would impose sanctions on “foreign persons responsible for gross human rights violations in Hong Kong.”

Although he welcomes the bill, Chow questioned whether it will make much difference if it becomes law.

“I see the act as the U.S. supporting Hong Kong, but I still doubt the effectiveness of the act,” he said. 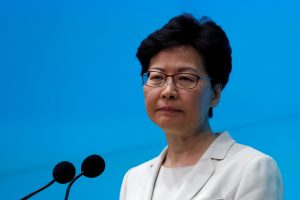 Hong Kong chief executive Carrie Lam June 18, 2019, reissued an apology to the Chinese territory's people for the conflict over an extradition law amendment that has provoked mass demonstrations. Cardinal John Tong Hon, apostolic administrator of the Diocese of Hong Kong, called on Lam to withdraw the bill.(CNS photo/Tyrone Siu, Reuters)

Mainland China has ruled Hong Kong, a former British colony, since it was handed back to Beijing in 1997.

At the time of the handover, China pledged to respect Hong Kong’s autonomy for 50 years under the slogan, “One country, two systems,” but many critics of Beijing, including Chow, claim the communists want to assert more control of Hong Kong now, rather than wait until 2047.

“Hong Kong and China are very different,” he said, noting the people of Hong Kong are used to more freedom of expression and action than their mainland counterparts. “We have our own system and our own lifestyle; how can these two places that are so different be joined together?”

Chow added that some protesters are now calling for an independent Hong Kong, although most observers contend Beijing would never allow Hong Kong to secede.

To understand one reason why Chow and his fellow young Catholics have come to oppose the People’s Republic’s rule of their semi-autonomous city, one must study the history of the Church in China.

An estimated 9 to 12 million people in mainland China as well as Hong Kong and Macau are believed to be Catholic. After the communists assumed power on the mainland in 1949, they began persecuting the Church as well as other religions, claiming, in particular, that the Catholic Church was foreign-controlled and a potential threat to the state.

During the worst periods of persecution, some Catholics, including at least one cardinal, were imprisoned and others were tortured and even killed for practicing their Faith. In 1957, China created the Chinese Patriotic Catholic Association, which rejected the authority of the Holy See and appointed its own bishops.

An underground church arose in response, and for decades the Vatican and China were estranged.

Relations have thawed somewhat in recent years, though, as Church officials have tried a less confrontational approach to Beijing. St. Pope John Paul II as well as Pope Benedict XVI and Pope Francis worked on repairing relations with the People’s Republic, and the efforts they and other Vatican officials made paid off last year when the Holy See and Beijing signed a landmark agreement.

Under it, China recognizes the pope as spiritual leader of all Chinese Catholics. Beijing can recommend bishops to be appointed but the pope retains veto power of them. Meanwhile, the Vatican has brought a number of bishops of the Chinese Patriotic Catholic Association into communion with the universal Church.

The controversial agreement gave hope to some Chinese Catholics, but was severely criticized by others, who saw it as a betrayal of the long-suffering underground church.

Beijing didn’t exactly help the situation by continuing some of the policies that have led to its estrangement from the Vatican in the first place.

For example, officials destroyed two Marian shrines in China within a few weeks of the agreement’s announcement, and is reportedly still engaged in harassment of some underground church believers. Nonetheless, the provisional agreement is still in place, and both sides continue to work on its implementation. 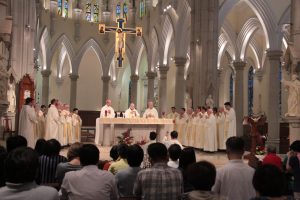 Auxiliary Bishop Joseph Ha, Bishop Michael Yeung, and retired Cardinal John Tong concelebrate Mass May 24 on the feast of Our Lady, Help of Christians at the Cathedral of the Immaculate Conception in Hong Kong. In 2008, Pope Benedict XVI established the feast as a world day of prayer for the church in China because Mary is venerated under that title at the Marian shrine in Sheshan, outside Shanghai, China. (CNS photo/Francis Wong)

Earlier this year, the Catholic student federation wrote a letter to Lam, a fellow Catholic, appealing to the shared faith of the students and Hong Kong’s chief executive, to both shame her and move her heart.

Lam has spoken openly of her faith on occasion, and has reportedly consulted Hong Kong’s Catholic leaders for counsel in the past. The letter called her actions during the protest a form of “tyranny,” and demanded Lam meet the protesters’ demands as well as resign her post.

“(T)he doors of the church are always open, and we ask you to repent and stop doing evil,” the letter stated.

Chow said Lam did write back to the students, “showing her gratitude for voicing our opinions without any actual response.”

Angelus News made repeated requests to Lam’s office for an interview, but was declined.

“Many youngsters appear to be anxious and worried due to the current social situation,” the cardinal said, adding, “I want to plead with the local government to really listen to the voice of the people of Hong Kong.”

Meanwhile, Father Michael Agliardo, SJ, executive director of the U.S.-China Catholic Association, said his group has been monitoring the situation in Hong Kong and hopes it can be peacefully resolved. Based in Berkeley, the association sponsors study tours of China, works with Catholic organizations in China and promotes dialogue. The organization has taken no official stance on the Hong Kong crisis, he said.

As a longtime observer of Chinese affairs, the priest thinks it’s not surprising Lam and her fellow Catholics don’t agree on Hong Kong’s future. Catholics are often divided on social and political issues, he noted, but the Church should “model how people can have different positions, voice them vigorously, and yet remain united and even build one another up in service to the common good.”

The priest also said he understands the concerns some Hong Kong Catholics have over what lies ahead.

“The Catholic Church has a long and respected history of education and social service in Hong Kong,” he said. “The Church is a part of Hong Kong and its history.”

The Jesuit priest said he hopes that Beijing authorities will come to “appreciate and respect the contributions of the Church to society in Hong Kong.”

He conceded that is a lot to hope for at a time when the Church is not even allowed to operate schools on the mainland and its social-service outreach is being “deliberately curtailed” by the government.

Nonetheless, the priest still has hope that the faith of the city’s Catholics will help them persevere.

“The Catholics and others I know in Hong Kong are caring, vibrant people,” Agliardo said. “I trust that they will not only survive but that they will continue to thrive.”

Rob Cullivan is a freelance writer living in Portland, Oregon. He has written for Catholic News Service and other religious and secular publications.