German Catholics press ahead with blessing ceremonies for same-sex couples

Organizers held a day of protest on May 10 in response to the Vatican’s recent declaration that the Church does not have the power to bless same-sex unions.

The ceremonies, known as “Segnungsgottesdienste für Liebende,” or “blessing services for lovers,” were promoted using the hashtag “#liebegewinnt” (“love wins”). Organizers said that the services were open to all couples, including -- and in particular -- those of the same sex.

But it said that it was difficult to calculate the precise number of blessing services.

In the Bavarian city of Würzburg -- but also in other locations such as Aachen, Berlin, Frankfurt, Mainz, and Cologne -- several services were held at the same time.

Almost 130 participants gathered in the Augustinian Church, not far from Würzburg Cathedral, while almost 40 people attended a ceremony in the youth church at the same time.

Observers in Cologne, Munich, and Würzburg reported to CNA Deutsch that in many places a “modest number” took part in the campaign.

A participant reported from Cologne that a total of six couples were blessed in the chapel of the local Catholic university community and a total of 23 people were present.

In many places, a general blessing was given at the end of the service, which, however, explicitly included homosexual couples and their relationships. Sometimes individual blessings were offered after the ceremony.

According to the organizers of a service at the Liebfrauenkirche in Frankfurt, “At the end of the Mass (...) Capuchin friars were available to all couples for personal blessings.” The church, dedicated to Mary, belongs to the Diocese of Limburg, led by Bishop Georg Bätzing, chairman of the German bishops’ conference.

In the Augustinian Church in Würzburg too all couples -- expressly including same-sex couples -- were invited to “come and get” the individual blessing in a backroom, after the service.

The order of service varied from place to place. A participant who attended the blessing ceremony in Cologne told CNA Deutsch that the ceremony was like a “political event.” The event was led by a female pastoral counselor in liturgical robes, who explained that she had already quit her church service.

After some political statements, the Gospel was read aloud, followed by a speech. Finally, the song “Imagine” by John Lennon was played. 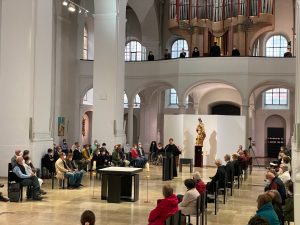 Ministers in St. Augustin Catholic church in Wurzburg, Germany, held a "blessings service" for homosexual unions and other couples on Monday, May 10th. (Gehrig/CNA Deutsch)

At the Würzburg youth church, an organizer spoke about the “anger and sadness” that had prevailed since the Vatican intervention. A temporary “wall” was set up in the sanctuary and participants were asked to write down “everything that upsets you” and place it there.

The Church should not presume to define what love is, the organizer commented: “Love is not a sin, we are all blessed, fundamentally. Let us build on that.”

At the same time, in the nearby Augustinian Church, the priest emphasized that God’s blessing belongs to “all people.”

“We can’t help but bless,” the priest continued, adding that those who blessed same-sex partnerships were following their consciences.

Würzburg student pastor Fr. Burkard Hose confirmed in his address during the blessing ceremony that in the past many people had been blessed “in secret.”

“We will continue to do this,” he said, adding: “The Church does not have the authority to withhold blessings.”

Some blessings took place before May 10. Diocesan media reported that on May 7 in the city of Geldern, North Rhine-Westphalia, two Catholic priests conducted blessings of 35 couples before an altar covered with a rainbow flag.

The Congregation for the Doctrine of the Faith (CDF) issued its declaration on March 15 in a document known as a “Responsum ad dubium” (response to a question). In reply to the query, “does the Church have the power to give the blessing to unions of persons of the same sex?” the CDF answered, “Negative.” The congregation outlined its reasoning in an explanatory note and accompanying commentary.

The Vatican statement, issued with the approval of Pope Francis, sparked protests in the German-speaking Catholic world. Several bishops expressed support for blessings of same-sex couples, while churches displayed LGBT pride flags, and a group of more than 200 theology professors signed a statement criticizing the Vatican.

The backlash prompted bishops in other countries to express fears that the German Church was heading for schism. They included English Bishop Philip Egan, Australian Cardinal George Pell, and Italian Cardinal Camillo Ruini.

Cardinal Joseph Zen, the former bishop of Hong Kong, added his name to an appeal, launched in Portugal, asking Rome to take action to stop a “schism” in Germany.

German Catholics have also criticized the day of blessing services. The group “Maria 1.0” urged the country’s bishops to unite with Rome in face of the protests.

Helmut Hoping, a professor of dogmatic theology at the University of Freiburg, told CNA Deutsch that some of the priests conducting blessings “also openly advocate opening the sacrament of marriage to same-sex couples in the medium term.”

The theologian also spoke of “schismatic tendencies” in the Church in Germany.

He said that “in several areas of Church doctrine and discipline, communion with the pope is being severed, for example when priests violate the clear ‘no’ of the Congregation for the Doctrine of the Faith to blessings of same-sex couples, which was published with the approval of the pope, and when bishops declare in advance that they generously tolerate this or declare such blessings theologically possible and pastorally necessary.”

Fr. Gero Weishaupt, a judicial vicar in the Archdiocese of Cologne and scholar of canon law, noted in an interview with CNA Deutsch that former Vatican doctrinal chief Cardinal Gerhard Ludwig Müller and other theologians have warned for some of a possible schism in Germany.

“And one can ask oneself whether it is not already latently realized,” Weishaupt commented.

CNA Deutsch reported that the bishop of Essen said in an interview last month that he would “not suspend a priest in his diocese or impose other Church penalties on him” if the cleric blessed same-sex couples.

The Diocese of Essen recently hosted an event declaring that same-sex blessings were a matter of “not if, but how.”

Bishop Bätzing, elected leader of the German bishops’ conference in 2020, said last month that the day of protest was not a “helpful sign.”

He added that blessing services were “not suitable as an instrument for Church-political demonstrations or protest actions.”

In a May 6 interview with ACI Stampa, CNA’s Italian-language news partner, the 60-year-old bishop insisted that the Church in Germany remained close to Rome, despite tensions over same-sex blessings, Communion for Protestants, and the country’s “Synodal Way.”

He said: “It is absolutely clear that there are matters that we can only discuss at the level of the Universal Church. We will contribute from Germany with our reflections.”

“However, I would like to reject the accusation repeatedly used of us being schismatics or of wanting to detach ourselves as the German national Church from Rome. Our bond with Rome and the Holy Father is very tight.”