ROME — In 2017, Pope Francis announced a summit of bishops to address the challenges facing the Catholic Church in the Amazon region, both from the evangelical perspective but also from the environmental one.

The summit, known formally as the Synod of Bishops for the Pan-Amazon Region, begins Monday, Oct. 7, in Rome and concludes Oct. 27.

It will include 270 participants, among them most of the bishops who work in the Amazon region (which includes nine South American countries), but also some papal appointees, who range from indigenous leaders to former United Nations Secretary General Ban Ki Moon.

Since the pope announced the synod back in October 2017, many have questioned the need for such a meeting that focuses only on the pastoral needs of one part of the world.

Francis has repeatedly stressed the need to find “new paths for the evangelization of the people of God,” particularly the “often forgotten” indigenous populations in the region.

“We must break with the historical paradigm that considers the Amazon as an inexhaustible pantry of the States without taking into account its inhabitants,” Francis said during his visit to Peru in January 2018. 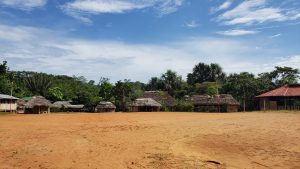 The public square of the town of Sarayaku, a remote community in the Ecuadorian Amazon. (Inés San Martín)

In the case of the Ecuadorian state of Sucumbios, bordering Colombia and in the heart of the Amazon, roads, transportation, electricity, and running water are scarce.

Yet wherever there are pathways through the jungle, there also seem to be oil pipelines, some of which were built more than 40 years ago and have had little to no maintenance ever since. Spills are common, causing lasting environmental damage.

Crude oil burns all the vegetation it touches, pollutes nearby sources of water used by humans and animals alike, while often rendering the soil it seeps into infertile.

“It’s as if the world hates us,” Daniela Andrade, a member of REPAM (Red Eclesial Pan-Amazónica, or Pan-Amazonian Ecclesial Network), that is helping the Vatican organize the synod.

With tears in her eyes, in late September she struggled to explain the bewilderment and anger people often feel over blatant pollution and related health issues generated by the oil and mining industries, coupled with grinding poverty and chronic governmental neglect.

“They want to make us disappear, they see us as a stone on the road blocking their ‘progress,’ ” she said.

In many ways, this “liquid gold” runs through an artery of death in the Amazon, killing the life it touches and bringing few benefits to the people who live there. Most oil companies import their own workers, so the industry doesn’t even provide jobs to local farmers whose lands are now tainted.

According to the synod’s preparatory document, participants will discuss the “rapid loss of biodiversity” (extinction of species of flora and fauna) and “the consequences for the planet, because the Amazon rainforest constitutes the vital lungs for the Earth’s atmosphere."

The document, known as the “Instrumentum Laboris” (“Working Instrument”), is the result of a series of listening sessions with more than 80,000 people, which were compiled and then worked into a text by eight authors. Not everyone within the Church is pleased with the result.

Among its critics is Venezuelan Cardinal Jorge Urosa, who called the document “flawed.” In a recent interview with Crux, he also lamented that most of those who speak of the synod “touch only on the ecological and socio-cultural aspects, and very little on the ecclesiological and pastoral aspects.

“There is an imbalance, because the main work of the Church is evangelization, bringing the gospel of Jesus Christ to the world, to all populations,” said the retired archbishop of Caracas.

Others have been stronger in their criticism, such as German Cardinal Walter Brandmueller, who worries the synod could mark “the self-destruction of the Church or its transformation from the mystical body of Christ into a secular NGO with an ecological-social-psychological mandate.”

The shortage of priests and missionaries in this region of the Earth makes the Catholic Church’s mission complicated, as an estimated 70% of the communities in the Amazon region do not have weekly access to the sacraments, and many see a priest once a year.

To address the shortage of priests, Pope Francis opened up the debate for the ordination of “viri probati”: men of “proven virtue” who are married, practicing Catholics and have the support of their community.

There currently are indigenous leaders who carry out a mission similar to that of a priest, giving proper burial to the dead, preparing children for their confirmation and leading the Liturgy of the Word. However, they cannot administer the sacraments.

Some critical of the synod have called such talk “heresy,” but Canadian Cardinal Marc Ouellet, who heads the Vatican’s Congregation for Bishops, said that it’s not.

Speaking to journalists Oct. 2 for the presentation of a new book on priestly celibacy, he acknowledged that, despite his skepticism regarding a possible change, it’s a tradition, not a dogma.

Still, Ouellet delivered a strong defense for the value of celibacy in the priesthood, noting that the sacrifice of men who’ve given up having a family to be priests is a powerful and “incomparable” witness of evangelization, something the Church needs today.

Until the Catholic Church is able to address the priest shortage (according to Peruvian Cardinal Pedro Barreto, the synod will discuss the possibility but reach no actual conclusion on it, as it’s not a parliament), and laity and religious sisters will be expected to continue to carry much of the load in terms of evangelization in the region.

One example is layman Daniel Valladolid, whose day job is farming. He doubles as a pastoral agent and an extraordinary minister of holy Communion in Sucumbios, coordinating with the one priest in the region to guarantee that he’ll come at least once a year, hopefully around a major feast like Christmas or Easter.

He’s known for his outspokenness against the pollution produced by oil companies, but also for being available to all who might need spiritual support.

“A true Christian walks with both feet: evangelizing, praying, and sharing the word of God, but also aiding those in need,” said Valladolid, who barely finished primary school.

When it comes to religious sisters, their presence is more ubiquitous than that of priests. One of the many “female faces” of the Church in the region is that of Sister Rosa Elena Pico, from the Ecuadorian order of the Missionaries of Mary Co-Redemptrix. 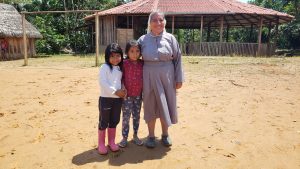 In 2017, she was relocated by her bishop to the indigenous population of Sarayaku, a semi-isolated community in the Ecuadorian Amazon that sees a priest once a month.

At first, she read the transfer as a punishment, but today she believes that “the Church has much to learn from the Amazon.

“I hope the synod says something in defense of Mother Nature, but also about the indigenous people who live here, inside the jungle, loving her. They also need the moral and spiritual support of the Church.”

Amazon, Synod of Bishops on the Amazon