Church caught in the middle as Myanmar fighting escalates

ROME — Attacks on churches and arrests of clergy in Myanmar are becoming increasingly common as the Catholic Church is being targeted for its alleged opposition to the ruling military junta.

The persecution of Catholics is one consequence of a humanitarian crisis caused by an escalation in hostilities between Myanmar’s armed military forces and resistance groups, as the junta seeks to crush opponents of a Feb. 1 coup that ousted Aung San Suu Kyi and other democratically elected officials on charges of falsifying the results of the country’s November 2020 elections and inciting public disorder.

In parts of the country where fighting is more intense, civilians are fleeing their villages and seeking refuge in the jungle to avoid getting caught in the crossfire.

For Catholics, stories like those of Father Michael Aung Ling are becoming increasingly common. Arrested June 16 for suspected support of opposition forces in the town of Kanpetlet, the priest was reportedly released following 11 hours of interrogation only after signing a document promising not to support opposition groups. 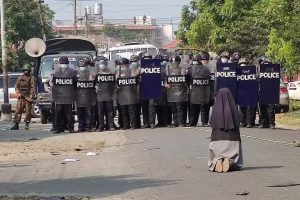 Sister Ann Nu Thawng, a member of the Sisters of St. Francis Xavier, kneels in front of police and soldiers during an anti-coup protest in Myitkyina, Myanmar, Feb. 28, 2021. (CNS photo/courtesy Myitkyina News Journal)

The same day, six priests and one layperson were detained for allegedly assisting young rebels in the village of Mandalay.

Several churches, where thousands have sought refuge amid shelling and gunfire, have also been targeted in recent weeks. On May 24, the military shelled Sacred Heart Church in Kayan Thar Yar, near Loikaw, with heavy artillery. More than 300 people had sought refuge in the church to avoid coming under fire. Four people were killed and at least eight wounded. Parishes, a cathedral, and even a seminary where more than 1,300 civilians had taken refuge have also been attacked.

In response, Myanmar’s bishops have appealed to the military, asking them to allow humanitarian aid to reach people displaced by fighting, and to stop targeting places of worship.

“As our country goes through her challenging times, this appeal is made on humanitarian grounds. We are not politicians, we are faith leaders, accompanying our people in their journey towards human dignity,” Myanmar’s bishops said June 11.

Noting that thousands of people have sought refuge in churches amid increased fighting, the bishops asked the military to “kindly observe the international norms of sanctuary in war times: churches, pagodas, monasteries, mosques, temples, including schools and hospitals, are recognized as neutral places of refuge during conflict.

“We appeal that these places are not to be attacked and the people who seek refuge should be protected,” they said.

However, locals have said this request is being ignored, and that despite the repeated appeal of the bishops and United Nations human rights advocates, churches continue to be targeted.

On June 13, military forces reportedly broke into a convent in the Archdiocese of Mandalay and detained several priests for more than 24 hours, questioning them about alleged ties to rebel groups.

Most church functions in the Diocese of Loikaw, where some of the worst fighting in the east of the country is centered, have all but ceased since gatherings are considered too dangerous. Villages are being abandoned, and several parishes in the diocese are now empty, with the local pastors being the only remaining members of the community.

The plight of Christians in the country has now caught the attention of the U.N. On June 11,  U.N. High Commissioner for Human Rights Michelle Bachelet expressed worry about how the fighting has been largely concentrated “in areas with significant ethnic and religious minority groups.”

“State security forces have continued to use heavy weaponry, including airstrikes, against armed groups and against civilians and civilian objects, including Christian churches,” she said, estimating that around 108,000 citizens have fled their homes in Kayah State alone in the past month.

Many are sheltering in forest and mountain areas “with little or no food, water, sanitation, or medical care. These are people in urgent need of humanitarian assistance,” she said, citing what she said were “credible reports” indicating that military forces “have used civilians as human shields, shelled civilian homes and churches … and blocked humanitarian access, including by attacking humanitarian actors.”

Not only have hospitals and religious churches and institutions been targeted, but schools have also been fired upon in an effort to stop parents from enrolling their children for the new school year, Bachelet said, noting that thousands of teachers have either refused to return to work or been suspended, meaning the majority of children in Myanmar “will not be able to access their right to education.”

“Rather than seeking dialogue, the military is branding its opponents as ‘terrorists’ and pursuing politically motivated charges against the democratic leadership,” Bachelet said, adding that in just four months, Myanmar “has gone from being a fragile democracy to a human rights catastrophe.”

“The military leadership is singularly responsible for this crisis, and must be held to account,” she said.

Bachelet is expected to update the U.N. Human Rights Council on the status of Myanmar July 7. In the meantime, the trial for ousted democratic leader Aung San Suu Kyi, which began June 14, is ongoing.

Aung San Suu Kyi, who faces a total of seven charges including corruption, bribery, and breaking coronavirus lockdown rules, could face a decades-long prison sentence depending on the outcome of her trial, which is expected to conclude around July 24.