ROSARIO, Argentina — Tens of thousands took to the streets of Santiago, Chile’s capital, on Oct. 18, to mark the one-year anniversary of a social revolt that left some 30 people dead, 25 metro rail stations completely destroyed, and thousands of store fronts damaged.

Two churches were attacked in that uprising 12 months ago, with pews and wooden statues looted to burn in nearby barricades but the buildings left standing.

Yet this time around, several hundred protesters broke off from those who had, until the first hours of the afternoon, rallied peacefully — almost joyfully, based on available footage — to fulfill an ominous threat someone had written the previous year: “The only church that illuminates is a burning church.”

Sunday’s violence against the two churches, the Assumption of the Virgin Mary and the parish of the “Carabineros” — Santiago’s police force — built to a crescendo. The attacks began with graffiti and looting, then profanation, and, finally, they were set ablaze.

“Death to the Nazarene,” was one of the mottos scribbled in the walls.

As the pulpit of one of them burnt, a woman in a gas mask posed for a picture with her arms raised and her fingers doing the “V” for victory. The snapshot was posted on Instagram and went viral, through the help of both those who celebrated the fire and those who condemned it.

A series of videos show hundreds of onlookers watching as the spire of one of the churches, consumed by the flames, fell to the ground. The scenes resembled a grotesque festival: Some cheered and danced over the religious objects they had ransacked, celebrating their accomplishment as they held phones set to a camera app to capture the moment in one hand, and in the other, beer cans.

Catholic leaders in Chile condemned the violence amid tensions over a constitutional referendum that was scheduled for Oct. 24 to decide whether the country’s Pinochet-era constitution needs to be rewritten.

“Let us never justify any violence,” he added in a statement. 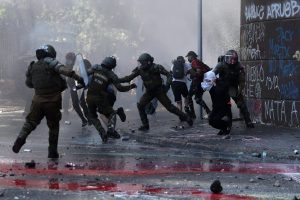 The Chilean bishops’ conference — long under fire for its handling of the country’s clerical sexual abuse crisis — released a statement condemning the attacks on private property and looting, as well as the attacks on places of prayer, “sacred spaces dedicated to God and the charitable service of people.”

The bishops noted that the violent groups that torched the churches “contrast with many others who have demonstrated peacefully.”

The two buildings were specifically targeted for what they are: Catholic churches. Yet the bishops avoided the personalization or calling the attacks an example of a slow but steadily growing trend on the continent: violence against the institution motivated by ideological and religious reasons.

Back in 2018, charitable foundation Open Doors International warned that the expansion of the secular humanist movement and its agenda of equality was expanding to historically conservative nations, particularly in the form of promoting a new sexual agenda.

Examples abound, from a growing radical feminism ready to set effigies of the pope on fire and make “street performances” showcasing the Virgin Mary aborting Jesus, to indigenous movements burning churches both in southern Argentina and Chile to raise awareness of historic land conflicts.

The stage seems set for a new wave of anti-Christian persecution in Latin America.

Thomas Heine-Geldern, executive president of the International Pontifical Foundation Aid to the Church in Need, released a statement on Monday saying the group is “dismayed by the aggression, looting and attacks on churches in Santiago de Chile: Yesterday’s events show how far the violence and hatred promoted by some groups can reach.”

Nothing justifies “the attacks on sacred spaces, nor the use of violence against the faith and beliefs of others will contribute to defend social, racial, or economic justice,” he argued. To ask for social changes, he said, is legitimate, while hatred against religious groups generates violence and destruction and should be openly condemned.

The turmoil in Chile has even captured the attention of the Council for Religious Freedom in neighboring Argentina, which has criticized the attacks themselves and warned of the temptation of shrugging them off.

“We express our concern that the repetition of these serious events leads to reducing them to mere acts of daily social misconduct,” the group declared in the wake of the attacks.

Violence against Christians is not new to the region: Mexico and Colombia have long disputed the yearly honor of being the world’s most dangerous countries to be a priest, courtesy of organized crime. But today’s violence seems nastier, less impersonal, and targeted specifically at Christians, and there’s little sign it’s going away anytime soon.