SANTA FE, Argentina – Pope Francis heads to Assisi on Saturday, where he will sign his latest encyclical, Fratelli Tutti, in which he will share his vision for a post-COVID-19 world, addressing among other things a pandemic that according to the United Nations, has affected South and Central America more than any other region in the world.

There are five Latin American countries — Brazil, Colombia, Peru, Argentina and Mexico — in the top 10 of countries with most positive cases and highest death toll. In addition, according to the International Labor Organization, at least 34 million jobs have been lost in the region due to the coronavirus pandemic.

Considering that an estimated 40 percent of the world’s Catholic population is located in this region, there’s no surprise in the fact that the first pope from the Global South has gone back to his home continent at least once a year since 2013, with the exception of 2014.

By now, there remain only a handful of countries still unvisited by Francis, including his home country of Argentina, and Venezuela.

Despite his many appeals, however, the social situation in Latin America is rapidly deteriorating — and this was the case even before the world came to a stop back in March.

Considering the vision Pope Francis has been trying to lay out since he took office, Latin America is growing farther apart from Simon Bolivar’s dream of a Great Homeland, with Argentina threatening to leave the Southern Common Market, and with extremist nationalisms on the rise in several countries.

Though free of internationally acknowledged armed conflicts at the moment, peace is also far from the region: the threat of Colombia’s civil war reigniting is constant; and protests often turn violent in Chile, Bolivia, and Ecuador. Organized crime continues to kill thousands every year in Mexico, Brazil, Colombia, Argentina and most countries in the region have seen one violent death a day since the year began.

A popular figure opposed to populism and all forms of ideological impositions, from afar Francis sees Nicaragua, Cuba and Venezuela ruled by men trying to impose a one-party system, where opposition leaders are “disappeared” by those in power. In mid-September, the United Nations Human Rights commission denounced that the government of Nicolas Maduro had perpetrated some 2,000 extrajudicial murders.

The pontiff continues his regular appeals for dialogue, but to no avail. 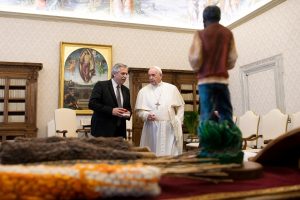 On the other side of the ideological divide Brazil, the largest Catholic nation in the world, elected President Jair Bolsonaro as head of state, a man accused of regarding the indigenous peoples who live the Amazon region as second class citizens, and who sees Pope Francis’ encyclical Laudato Si’ on the care of our common home as the reverse of his environmental policies.

Despite the many requests from the Catholic Church to care for the populations in the Amazon basin — including last year’s Synod of Bishops on the region — the destruction of the rain forest continues, with authorities either fomenting deforestation in favor of mining and agriculture, or turning a blind eye as it happens.

In addition, inequality continues to grow: The United Nations Economic Commission for Latin America and the Caribbean estimates that by the end of the year, more than 230 million of the region’s 650 million inhabitants will be living in poverty. Those numbers may even be worse, as Argentina, for instance, is projecting that half of the population will lack basic goods by the end of the year (up from 40.2% today).

Virtually every country in Latin America faces mounting international debt, with several being on the brink of default. Francis has made calls for debt relief for poorest nations, but with the world facing an economic crisis, the response has been tepid.

As the pope continues his crusade against a throw-away culture that discards those on the margins of society, pro-abortion groups continue to pressure governments to legalize the practice, often with anti-clerical expressions and rallies that are openly anti-Catholic: several effigies of the pope have been burned through out the continent in recent years the name of female reproductive rights.

And despite the multicultural origins of the region, xenophobia continues to grow throughout the continent as people flee many countries due to poverty, political persecution and instability.

At a more fundamentally Catholic level, the Church is also facing several challenges: In Chile, opposition against the hierarchy continues due to its mishandling of the clerical sexual abuse crisis: in less than two years, Francis accepted the resignation of 30 percent of the bishops’ conference, all accused of either abuse or cover-up.

Furthermore, there are rumors of a possible “Theodore McCarrick from Latin America,” meaning a high-ranking church official who behaved as a sexual predator and was still able to rise up the ranks to become a cardinal, and still remains one. And the case against Bishop Gustavo Zanchetta, who was once close to the pope, over his allegations of abuse of seminarians, continues unresolved.

Pentecostalism and other Christian denominations continue to grow in the pews, often through people who leave the Catholic Church amidst protests that the hierarchy is too soft on pro-life issues and worship, while many among those who stay reject the Church’s teachings on several areas.

Now Francis can hardly be blamed for most of these ills, and he’s often tried to address those where he believes the Church’s teaching offers a way forward.

Yet in a world where political commentators and analysts have become used to cherry-picking statements to fit a narrative, there are ample reasons to believe Latin America will have much to choose from, both to embrace and to ignore, in the pope’s latest effort to call the global community to conversion.