According to a Nicaraguan bishop exiled in 2019 for his own safety at Pope Francis’s request, his country today faces two crises: A social and political meltdown and the COVID-19 coronavirus pandemic, which the government of President Daniel Ortega has labeled a “common flu” and which has now caused the national health system to collapse.

“The government of Nicaragua, instead of addressing the pandemic with measures that could block its spread, basically promoted massive events so that more people would get sick,” said Bishop Silvio Jose Baez, auxiliary of Managua.

“[Ortega] minimized the illness, didn’t stop classes, didn’t promote social distance and the exponential curve of contagion is growing at an alarming rate,” he said. 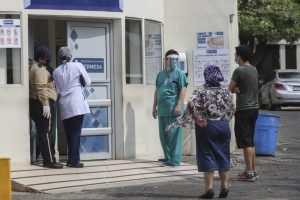 A medical worker wears a mask and a face shield at the entrance of the SERMESA hospital in Managua, Nicaragua, Monday, May 11, 2020. President Daniel Ortega’s government has stood out for its refusal to impose measures to halt the new coronavirus for more than two months since the disease was first diagnosed in Nicaragua. Now, doctors and family members of apparent victims say, the government has gone from denying the disease’s presence in the country to actively trying to conceal its spread. (Alfredo Zuniga/AP via Crux)

“We’re suffering a double crisis in this small country, which is very poor, has suffered much, but whose people have deep beliefs and that is very hopeful,” Baez said.

Baez spoke with a group of journalists via Google on Tuesday from Miami, where he’s spending time with his family after arriving from Italy on March 8 in one of the last regular commercial flights to leave Rome’s international airport before the country announced strong measures to stop the spread of the coronavirus.

The prelate left Nicaragua in early 2019, at the request of the Argentine pontiff, who knew of the many threats against his life. The bishop has been labeled by the government of Ortega as the leader of a social revolt, together with the country’s 11 other Catholic bishops and Archbishop Waldemar Stanisław Sommertag, the papal representative in this central American nation, the second poorest in South America. 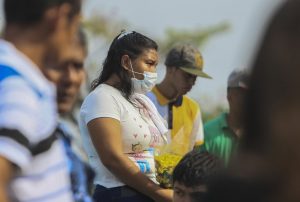 A woman wears a mask against the spread of COVID-19 disease, as she attends a funeral at the Central cemetery of Managua, Nicaragua, Monday, May 11, 2020. (Alfredo Zuniga/AP via Crux)

Though far from being the only member of the Catholic hierarchy openly who criticized Ortega since a social uprising in April 2018, Baez has by far been the most outspoken, often going to Twitter to label the government as a “dictatorship.” Some believe he’s been too truculent and an obstacle to dialogue.

“Unfortunately, I have to be away from the country, but for a pastor, there are no times nor distances, and the Nicaraguan people know I am with them, with my prayer and through social media,” the prelate said.

Baez spoke about a range of issues, including how Pope Francis is seen in Nicaragua, the relationship between Church and State and the need for a better education, both when it comes to formation so people can “reason” but on the faith, so people’s knowledge of God is deeper than a public manifestation of love for Mary.

The bishop said that to put the current situation into perspective it’s necessary to understand one cannot separate the mission of the local church with what the country lives at a social and political level.

He said there are three distinctive aspects to Nicaragua:

Referring to the “civic and peaceful rebellion” of 2018, the bishop said it was the consequence of too many years of Ortega, who took office in 2006 after 10 years of a weak democracy. Before then, Ortega was also in power as leader of the Sandinista revolution that in 1978-1979 ousted the Somoza dictatorship.

What lit the fire of the 2018 protests was a proposed reform of the social security system, which would have increased the contribution of workers and reduced the pensions of the elderly. Since September of that year, it’s been a crime to carry the Nicaraguan flag or to engage in civil protest. Open air Masses and Church celebrations, the feast of Mary’s Immaculate Conception, have been cancelled or held with extreme caution.

According to Baez, no one expected the size of the protests. Hundreds of thousands went out to the streets, even after Ortega announced he was backtracking on a reform of the social security system. 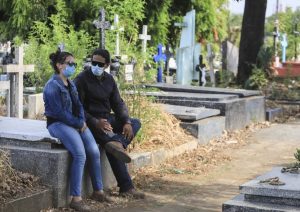 A couple wear masks as they attend a funeral at the Central cemetery of Managua, Nicaragua, Monday, May 11, 2020. (Alfredo Zuniga/AP via Crux)

“No one expected this reaction from society,” Baez said. “Instead of being heard with respect by the government, with an actual intention of listening and proposing democratic solutions for the population, was answered with violent repression by the police, the military and the paramilitary, who were civilians armed with weapons.”

“These were months of violence during which the people, unarmed, was the victim of a brutal aggression,” he said.

The Church found itself in a complex situation, Baez argued, with over 400 dead, thousands disappeared and others tortured in prison, with even more people forced into exile.

“Those who were being attacked and murdered were people of our parishes, of our communities, and they came looking for our support, for words of comfort, and above all, for protection” he said. “We opened the churches, and we tried to tend to those wounded.”

At the same time, Ortega asked the Church to mediate in an effort at national dialogue, so the bishops found themselves “in a very uncomfortable position: as pastors of our people, but also called to be impartial.”

This led to a freezing of the relationship between the government and the Church, with Ortega and his wife, VP Rosario Murillo calling the bishops terrorists and coup-mongers.

“Ever since, the aggression, the persecution, the injurious attacks against the Church have continued,” he said. 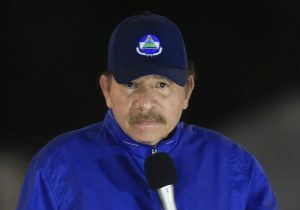 In this March 21, 2019 file photo, Nicaragua’s President Daniel Ortega speaks during the inauguration ceremony of a highway overpass in Managua, Nicaragua. (Alfredo Zuniga/AP via Crux)

One of the ironies of the Ortega government, Baez said, is during the revolution it was openly atheist and anti-clerical, but since they regained power the Sandinistas have labeled themselves as “Christian.”

Regarding Pope Francis, who’s often spoken about the “situation” in Nicaragua, without ever taking sides, Baez said that during the crisis, “the Holy Father was very close to the bishops’ conference, with words, advice and prayer.”

“We felt him very close to us as a brother,” he said, adding that he personally met with Francis three times, in his personal residence, and that he’s visibly interested in what’s going on.

“Many would want stronger words, a more clear condemnation, but we can all understand that the relationship of the Holy See with Nicaragua cannot be closed in an imprudent way, it’s necessary to maintain possible channels of dialogue that lead to a solution to this crisis,” Baez said.