A long-awaited report on the handling of abuse cases in Germany’s Archdiocese of Munich and Freising has faulted Pope emeritus Benedict XVI and Cardinal Reinhard Marx.

The study issued on Thursday criticized the 94-year-old retired German pope’s handling of four cases during his time in charge of the southern German archdiocese. Media reports had previously focused on his handling of a single case, that of a priest named Father Peter Hullermann.

Westpfahl Spilker Wastl, the law firm that produced the study, presented the conclusions of the more than 1,000-page text at a live-streamed press conference on Jan. 20, reported CNA Deutsch, CNA’s German-language news partner.

The study’s official title is “Report on the Sexual Abuse of Minors and Vulnerable Adults by Clerics, as well as [other] Employees, in the Archdiocese of Munich and Freising from 1945 to 2019.”

The report covers 1977 to 1982, the period that the future Benedict XVI led the archdiocese, as well as the tenures of Cardinal Friedrich Wetter, who succeeded him, and Cardinal Reinhard Marx, who has served as archbishop of Munich and Freising since 2007. 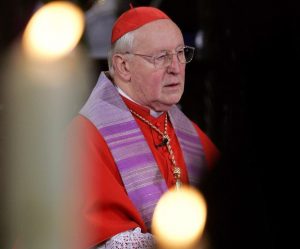 In addition to criticizing the future pope’s handling of four cases, investigators said that Wetter had mishandled 21 cases and Marx two cases.

The report identified at least 497 victims of abuse, but investigators said that the true figure was likely to be higher. They said that 247 victims were male, 182 female, while the gender of 68 victims could not be determined. They added that they had found 235 alleged perpetrators, including 173 priests.

Around 60% of suspected crimes were committed against children between the ages of eight and 14.

Marx was not present at the press conference but is expected to make a statement in response to the report’s findings on Thursday afternoon.

Marion Westpfahl, a founding partner of Westpfahl Spilker Wastl, lamented the cardinal’s absence as she presented the report.

Lawyer Martin Pusch, an author of the report, said: “In a total of four cases, we concluded that the then-archbishop, Cardinal Ratzinger, can be accused of misconduct.”

He said that in two of the cases, clerics committed abuse while Ratzinger was in office. While they were criminally sanctioned by secular courts, they continued to perform pastoral duties, he said, and no action was taken against them under canon law.

In a third case, a cleric convicted by a foreign court worked in the Munich archdiocese. Pusch suggested that Ratzinger knew of the priest’s history.

A Vatican spokesman said on Jan. 20: “The Holy See believes it must give due attention to the document, the contents of which it does not know at the moment. In the coming days, following its publication, it will take note of it and will be able to appropriately examine its details.”

“In reiterating its sense of shame and remorse for the abuse of minors committed by clerics, the Holy See assures closeness to all victims and confirms the path taken to protect the youngest, guaranteeing them a safe environment.”

Claims that the future pope covered up an abuse case in the archdiocese of Munich and Freising resurfaced earlier this month, more than 10 years after the Vatican firmly rejected the allegations. 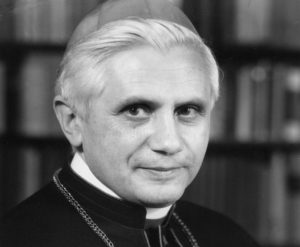 Then-Archbishop Joseph Ratzinger, who later became Pope Benedict XVI, is pictured in this file photo May 28, 1977, the day of his ordination as archbishop of Munich and Freising. (CNS photo/KNA)

The allegation related to the archdiocese’s handling of the case of Hullermann, who is accused of abusing at least 23 boys aged eight to 16 between 1973 and 1996.

The priest, identified in German reports only as “H.”, was suspended from his duties in the Diocese of Essen in 1979 over allegations that he abused an 11-year-old boy.

He was moved in 1980 to the Munich archdiocese. Hullermann was found guilty of molesting boys in a parish of the archdiocese in 1986.

Archbishop Georg Gänswein, Benedict XVI’s private secretary, told the German newspaper Die Zeit: “The claim that he had knowledge of the previous history [allegations of sexual assault] at the time of the decision on the admission of Father H. [to the archdiocese] is wrong. He had no knowledge of his previous history.”

After leaving Munich archdiocese in 1982, Cardinal Ratzinger served as prefect of the Vatican Congregation for the Doctrine of the Faith before his election as pope in 2005. He retired in 2013 and has since lived in relative seclusion at the Vatican.

Westpfahl Spilker Wastl produced a report on the Munich archdiocese’s handling of abuse cases in 2010, which has never been published. It announced a delay in the publication of the new report in November 2021, citing “new findings obtained in the recent past” that required an “intensive review.”

The Munich law firm was previously responsible for compiling a report on the handling of abuse cases in the Archdiocese of Cologne.

Cardinal Marx wrote to Pope Francis in May 2021, offering to resign amid the fallout from the clerical abuse crisis in Germany. The pope declined his resignation in June that year.

Marx is a member of the pope’s Council of Cardinals and the coordinator of the Vatican Council for the Economy. Until 2020, he served as the chairman of the German bishops’ conference.

In April 2021, Marx asked German president Frank-Walter Steinmeier not to bestow the Federal Cross of Merit on him after an outcry among advocates for abuse survivors over the award.

He had been scheduled to receive the Bundesverdienstkreuz, Germany’s only federal decoration, at the Bellevue Palace in Berlin. 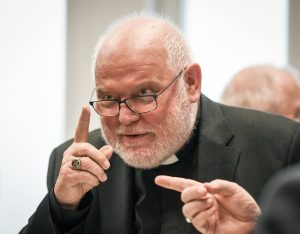 Marx said that he did not want to draw negative attention to other award recipients.

Peter Bringmann-Henselder, a member of the affected persons’ advisory board of Cologne archdiocese, had urged the president to withhold the honor, citing Marx’s handling of cases when he was bishop of Trier in 2001–2007.

The official web portal of the Catholic Church in Germany reported in June 2021 that Marx’s actions in Trier would be “comprehensively investigated” by an independent commission on behalf of the diocese that has been led by Bishop Stephan Ackermann since 2009.

The Archdiocese of Munich, in Bavaria, southern Germany, dates back to 739 A.D. It serves more than 1.7 million Catholics in 758 parishes, out of a total population of 3.8 million people.

Since 1945, the start of the period covered by the report, the archdiocese has been led by Archbishops Michael von Faulhaber, Joseph Wendel, Julius Döpfner, Joseph Ratzinger, Friedrich Wetter, and Reinhard Marx.