ROME — When a newly appointed bishop in South Sudan was shot in the legs last month, it shocked and concerned the local community, and again shed light on complexities the Church faces in the oversight of a country ravaged by conflict and war.

One of these complexities is the difficulties the Holy See often faces in appointing foreign missionary bishops in places like Africa and South America, which are still considered “mission territory” in the Church, but which have large Catholic populations with strong and rooted cultural identities.

Bishop-elect Christian Carlassare, 43, was appointed to lead the Diocese of Rumbek in March, filling a 10-year vacancy after the death of the previous bishop, Caesar Mazzolare, in 2011, the year of South Sudan’s independence.

Msgr. Carlassare, a Combonian missionary originally from northern Italy, was assaulted the night between April 25 and 26, just after midnight, when two unidentified men broke into the bishop-elect’s house and shot him in the legs.

The priest survived the assault but suffered significant blood loss and was transferred to a hospital in Nairobi, where he underwent a transfusion and is recovering. His episcopal consecration, initially set for May 23, has been postponed as both local and state authorities search for the culprits. 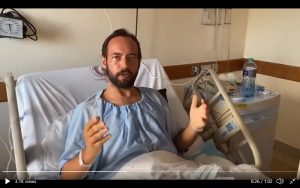 Bishop-designate Christian Carlassare speaks from a hospital in Nairobi, Kenya, in a video message posted April 28 on Twitter. In his video message Msgr. Carlassare encouraged forgiveness and reconciliation. (CNS/Comboni Missionaries)

In the immediate aftermath of the attack, tribalism was pinned down as the primary motive, as Rumbek is a majority Dinka area, and Msgr. Carlassare for 10 years prior to his appointment worked with the Nuer tribe, which are traditionally the sworn enemies of the Dinka.

There is also speculation that the attack could be retaliation for Rome’s perceived snub of a Dinka priest who has run the diocese for the last 10 years. Msgr. Carlassare’s appointment amounted to the priest being passed over for a foreigner. Local divisions within the Dinka tribe reportedly made naming a local impossible, although this and tribalism have been disputed by other missionaries working in the area as the real motive.

It has long been the Catholic Church’s practice to name foreign missionaries as bishops in places still considered mission territories.

In the United States, for instance, it was a historically common practice for the Church to name Irish missionaries to fill diocesan vacancies. Eventually local nominations became more common as Catholic communities in the U.S. grew and local vocations increased.

It is still the common practice to name foreign missionaries in many countries in Africa, Asia, and Latin America. Since these missionaries have no roots in the place and are less prone to be tied up in local drama, the reasoning goes that they are easier for locals to accept.

While often true, this latest incident in Rumbek illustrates that is not always the case.

The fact that no bishop had been named to lead the diocese in 10 years, since South Sudan’s independence in 2011 following a bloody war with strong ethnic undertones shows just how carefully the Holy See was treading in making the decision.

Just two years after its independence, fresh conflict broke out in South Sudan. The country has yet to reach a cease-fire, while millions are either dead or displaced in what has become one of the world’s most serious humanitarian crises.

Finding a person who can strike the right balance without stoking local tribal sensitivities is no easy task, which is why numerous dioceses in South Sudan have stayed vacant since South Sudan’s independence.

Yet Rumbek is far from the only place where locals have taken issue with their incoming bishop. Last year, the appointment of a new archbishop in the South Sudanese city of Juba also met resistance, and similar instances have also occurred in other African countries.

In 2012, for example, Pope Benedict XVI appointed Bishop Peter Ebere Okpaleke to lead the Diocese of Ahiara in Nigeria, but a group of priests and laity rejected the appointment on grounds that Bishop Okpaleke belonged to a different ethnic group.

What resulted was a yearslong standoff preventing Bishop Okpaleke from being installed. In June 2017, Pope Francis issued an unprecedented ultimatum, giving priests in the diocese a 30-day deadline to either accept the bishop, or be suspended.

Most of the priests reportedly complied with the pope’s request, however, Bishop Okpaleke resigned in April 2018, saying his continued presence in Ahiara was problematic for the Church. In April 2020, he was named to a different, newly formed diocese in Nigeria.

Not all disputes over new diocesan leadership are that dramatic, and assaults such as the one inflicted on Msgr. Carlassare are also rare, yet they illustrate the difficulties that are often involved in these appointments, where choosing a local is often a “damned if you do, damned if you don’t” scenario.

Another thing Msgr. Carlassare’s incident illustrates is the Catholic Church’s “Africa moment,” given that Catholicism in Africa is growing faster than anywhere else in the world, and vocations are exploding.

Many African priests are themselves sent as missionaries in the U.S. and Europe, however, as the Church on the continent grows, so does the expectation and pressure for local bishops. It’s not a bad problem for the Church to have, but it is one that will need time and careful consideration to solve.

As with any other community facing growing pains, there are still lots of wrinkles to work out. In the meantime, the Holy See will have to work out a strategy for navigating these nuances when naming pastors for some of the world’s most complex, yet largest and fastest-growing Catholic communities.