On the evening of Feb. 23, Emmanuele and Maria Capretti gathered with a community of other Catholic missionary families and Ukrainian Catholics in a home in Kyiv.

As they do every Wednesday evening, they prayed, listened to the word of God, and sang the psalms. Front page news headlines and rumors had been warning of an impending invasion of Ukraine by Russia for weeks. If the invasion were to happen, the families guessed, it would surely strike the eastern part of the country already embroiled for years in armed conflict with Russian-backed separatists, before Kyiv.

Still, the Caprettis, with their five children (ages 1 to 7) and another on the way, had to discern what to do in the same dilemma faced by the rest of the country: to stay or to go?

But on a Sunday morning the week before, while praying with their young children at home, Emmanuele and Maria say they got their answer. In front of his kids, the husband opened his Bible to a random part of the Gospel. His finger fell on a reading from the Gospel of Luke.

“No one who has put his hand to the plow and then looks back, is fit for the kingdom of God,” he read.

The family took it not as a direct command, but as a sign that God was close to them, and that he wanted them to decide freely.

A few hours after the missionaries went back to their homes that night, the invasion began. To their surprise, the violence soon reached Kyiv. Gun battles with suspected Russian infiltrators broke out in the streets. Explosions and air-raid sirens followed.

Today, Emmanuele and Maria feel secure in their decision to remain in the country where they’ve lived since 2016.

“Since we took that decision to stay in Ukraine, God has given us so many signs, so many graces,” recalled Emmanuele in a phone interview.

A few years after getting married and settling in Emmanuele’s hometown of Brescia in northern Italy, the couple were officially sent by Pope Francis as a missionary family of the Neocatechumenal Way to Kyiv, together with several other young families, at the request of Kyiv’s Catholic bishop.

For the last six years, their mission has been a simple one: to be a visible presence of God’s love in the capital city together with their small children, living and working among ordinary people. The families meet a few times a week for Mass and a liturgy of the word, as well as for street evangelization. Some families help give catechesis in parishes, others with marriage preparation for young couples.

For Catholic missionaries in Ukraine like the Caprettis, a different mission now begins. 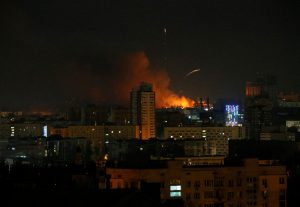 Smoke and flames can be seen during shelling by Russian forces in Kyiv, Ukraine, Feb. 26, 2022. (CNS photo/Gleb Garanich, Reuters)

Two days after the invasion started, Kyiv was under attack and Emmanuele needed to get food for his family. Some friends who had fled the city had left him their house keys, and their permission to take whatever he needed. He was amazed by what they had left him.

“We had never, ever had that much food in our home until that day,” he said with a chuckle. He later heard in the news that players from top-tier Ukrainian soccer team Shakhtar Donetsk had lacked food while taking shelter with their families in a Kyiv hotel.

“Hearing that made me see the love of God,” said Emmanuele. “He gave us to eat when we had nothing, while so many people in this country are going hungry.”

That didn’t make the situation in Kyiv less frightening. The threat of Russian airstrikes turned the city into what Maria described as a “ghost town” shrouded in total darkness at night. The family covered their windows with mattresses to protect against possible blasts. The evening of the first bombings, Maria sang the Litany of the Saints to her children to drown out the noise. While the explosions kept Emmanuele and Maria awake every night, they experienced nothing short of a parenting miracle: the kids slept through them without fail.

“To see the children always happy and serene in this unbelievable situation was a grace from God,” said Maria. “We’ve seen how God has always given us a great peace, despite the fear.”

A few nights later, as the attacks on Kyiv intensified, a terrified Emmanuele made his way to a church for a weekly catechesis session. No one else showed up, but he found out another missionary family who had just fled Kyiv had left their car there for his family to use.

“It was totally crazy to go out that night, to leave my wife and children alone at home, absolutely crazy,” admitted Emmanuele.

Yet the risk paid off. The car helped get the Caprettis to the city’s train station, where a chaos that reminded Emmanuele of a scene from the film “Life is Beautiful” awaited them.

“It was total panic,” he recalled. The day was Friday, March 4. A sea of people waiting for the next train rushed the train’s doors, with soldiers armed with machine guns standing in the way. To make it onboard, the family had to abandon their suitcases full of clothes at the station.

“It was like the Lord opened the Red Sea for us that day,” said Emmanuele.

The family spent the next 12 hours cramped inside the train headed west to Uzhhorod, a city on the border with Slovakia, as far as possible from the violence without leaving Ukraine.

The train moved through the Ukrainian countryside in darkness. Cellphones had to be turned off to avoid detection by enemy forces. The family had nothing to eat or drink, or anywhere to sit or move around. To relieve themselves, passengers were shown a hole between two train cars where they could do so.

The children slept on the floor and, to their parent’s amazement, didn’t complain once. (“They were angels,” said Maria, as their ruckus could be heard in the background of the phone interview a week later.) A man gave up his seat so that Maria, six months pregnant, could sit down. And a woman on the train offered to hold their 1-year-old daughter so that the weary couple could tend to the needs of their other four children.

They arrived at Uzhhorod at 4 a.m. the next morning, carrying only their travel documents. A week later, even Maria struggled to believe the story of their odyssey.

“I still don’t know how we got on that train.” 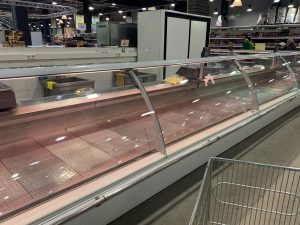 A photo of an empty food display at a supermarket near Kyiv taken by Emmanuele Capretti March 2.

Now in Uzhhorod, the Caprettis have been joined by other missionaries forced to flee different parts of the country.

There, they continue to see God’s hand at work. They were first taken in by a local seminary, but a Ukrainian family has since offered them a home to stay in. They visited a local church where Catholic aid agency Caritas had dropped off a fresh truckload of donated clothes for them to choose from.

For now, they will continue their work with the other refugee missionaries in their new city. When asked why they don’t return to the safety and comfort of home in Brescia, Emmanuele said the blessings speak for themselves.

“We don’t feel at this moment that God is calling us to go back home,” said Emmanuele. “What do we feel? We feel at peace. Our children are happy. We showed up here with nothing but the clothes on our backs, and now we have clothes.”

The Caprettis will keep praying for an end to the war, that the country they have grown to love will be spared the worst. Still, Emmanuele fears that even if Russia relents and peace is achieved, Ukraine will never be the same again. While some Ukrainians are bravely staying behind for whatever the future brings, many of the millions who have already left have found better jobs and living conditions abroad.

“The question is: How many of the people who have left this country and are building better lives elsewhere will want to come back?” said Emmanuele.

The family says they are especially strengthened by the witness of other Catholics in Ukraine, among them priest friends who have stayed behind in Kyiv and other embattled cities to minister to Catholics there. And whatever happens in the future, the Caprettis say nothing — or no one — can take away the miracles they’ve witnessed.

“I see how in all this, the Lord has really been our Father. He’s given us the certainty that he’s the Father of our children, and he’s guiding our history,” said Maria.

“The biggest grace of this time is that God has always given us a communion and a serenity that just doesn’t come from ourselves,” said Emmanuele.

“I’ve never seen God act in my whole life like he has in these days.”