It was an announcement as shocking as it was short: On the evening of Sept. 24, Italian Cardinal Angelo Becciu, formerly the pope’s chief of staff, resigned not only as the prefect of the Vatican’s saint-making body, but also from “the rights connected to being a cardinal.”

This formulation — renunciation of the “right connected to being a cardinal” — had only been used once before, when Scottish Cardinal Keith O’Brien resigned following a sex scandal involving adult seminarians. O’Brien spent the rest of his life in quiet “prayer and penance” just over the Scottish border in Newcastle, England.

(American Cardinal Theodore McCarrick resigned completely from the College of Cardinals in 2018 after credible accusations were made against him involving the abuse of minors. He was removed from the priesthood the following year.)

The Becciu case is different from O’Brien in two important ways: 1) Becciu has not been accused of sexual misconduct; and 2) he also has no plans to slip quietly into obscurity.

Although when the announcement was made on Thursday many assumed the dismissal was connected to a notorious $225 million property deal in London, where Becciu was accused of juggling the books while serving as “sostituto” (“substitute”) at the Vatican’s Secretary of State, things became clearer on Friday when it was revealed the cardinal was being punished for allegedly funneling business to companies owned by his brothers.

The cardinal defended himself on Friday, telling Italian news publication Domani that he committed no crimes, and “hasn’t stolen a penny.”

Becciu admitted to favoring his brothers’ construction companies, but said, “What’s wrong with that?”

As of press time, the Vatican hasn’t commented on the affair, although Australian Cardinal George Pell, the former head of the Secretariat for the Economy who often complained about corruption at the Vatican, issued a statement congratulating Pope Francis for the “recent developments” and offering his hopes that the “cleaning of the stables” continues at the Vatican. 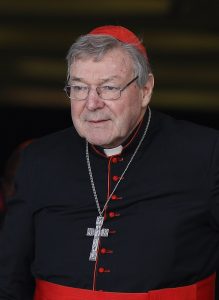 Australian Cardinal George Pell leaves a session of the Synod of Bishops on the Family at the Vatican Oct. 23, 2015. (Catholic News Service/Paul Haring)

The question remains: Why now?

It is obvious the case against Becciu had been growing for some time. This summer, Pope Francis issued a new procurement law for the Vatican meant to increase transparency, and it specifically bans officials assessing bids from companies owned by close relatives.

The ongoing saga of the former Harrods warehouse in the London neighborhood of Chelsea was also showing no signs of quieting down. The 2014 deal involved transforming the building into luxury apartments, but questionable financing from the Vatican’s ‘Peter Pence’ fund and extravagant fees paid to the person who brokered the deal drew the attention of the Vatican’s financial watchdog.

This led to a series of raids in the Vatican, and the dismissal of several employees.

However, it is still surprising to see Becciu’s head on the block. In previous Vatican financial scandals, lower-ranking figures usually take the fall and any cardinal implicated was left in the clear.

A cynic might say this is a typical Vatican power play. As far back as 1859, French writer Edmond About noted that if “occasionally officials of a certain rank are punished, if even the law is put in force against them with unusual vigor, rest assured the public interest has no part in the business. The real springs of action are to be sought elsewhere.”

At first glance, the Becciu affair seems to fit this narrative. Handing out contracts to friends and family has a long tradition in the Vatican and is hardly frowned upon in Italian society. For a cardinal to pay the consequences for such actions is certainly raising eyebrows, and not just Becciu’s.

In addition, at least by Becciu’s account, the pope was punishing him for the hundreds of thousands of dollars that ended up in the bank accounts of his relatives, not the hundreds of millions of dollars currently swirling down the drain of the toxic London deal, a scandal that likely has more than Becciu’s fingerprints on it. 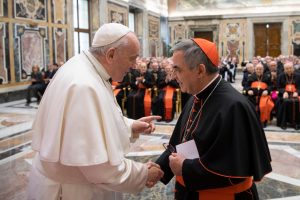 Pope Francis in a file photo at the Vatican greeting Cardinal Angelo Becciu. The Vatican announced Sept. 24 that Pope Francis accepted Becciu's resignation as prefect of the Congregation for Saints' Causes and his renunciation of the rights associated with being a cardinal. (Catholic News Service/Vatican Media)

However, Occam’s Razor may suggest otherwise. There’s an old adage that sometimes you have to shoot a general to change an army, and Pope Francis might have noticed that Becciu had nicely lined himself up in the crosshairs.

Add the fact that some of the money diverted by the cardinal was meant for helping migrants — an issue close to the pope’s heart — and it seems that the pope might have just figured he was the right person to serve as an example.

But before hailing a new era in Vatican justice, some questions are still up in the air.

Becciu himself noted that he wasn’t ever put on trial and claims that a court would find him innocent. His case shows that high-ranking Church officials are still above official scrutiny, even if they can be punished for their alleged crimes. Amid calls for greater transparency, one-sentence late-night press statements leave a lot to be desired.

The cardinal is also still a cardinal. There is no real definition of what “rights” he has lost, although presumably he won’t be allowed to vote in the next conclave.

However, he will still be allowed to wear the cardinalate red and be called “Your Eminence” in the finest restaurants in Rome, which for many prelates is what being a cardinal is all about.

And don’t count the 72-year-old cardinal out of the Vatican game entirely. Becciu still has friends in the highest echelons of the Church, and knows where many of the bodies — and bank accounts — are buried. If after the next conclave it emerges that all is forgiven, don’t be surprised: It’s not like he’s been found guilty of a crime.