In a new social-media campaign, the Vatican is encouraging young people to be creative is reaching out to the elderly, who have been disproportionately affected by the coronavirus pandemic.

Launched Friday, Nov. 27, the campaign is titled, “A Gift of Wisdom,” and encourages young people to turn their thoughts to the elderly who might be lonely as a result of the coronavirus during the holiday season.

It follows a July campaign titled, “The elderly are your grandparents,” urging young people to reach out in some way to the elderly who are isolated due to the coronavirus, sending them a “virtual hug” through a phone call, a video call, or a personal picture or note that they send.

That campaign was promoted on social media with the hashtag, “#sendyourhug.” 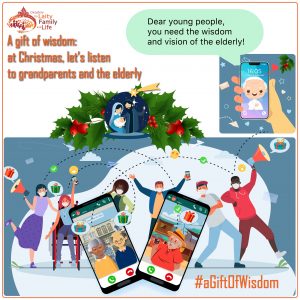 In a press release for their new holiday campaign, the Vatican department for Laity, Family and Life, which is overseeing the initiative, noted that Christmas is rapidly approaching, calling it a time “when Jesus is born within our families.”

“This year, in the particular climate in which we are living, there is an opportunity for young people to receive a special gift. Because of the pandemic, there are more elderly people who live alone. We can create bonds with each of them,” the dicastery said, adding, “this is a treasure waiting to be discovered!”

Referring to their previous campaign in July, the department noted that young people around the world participated, sending “virtual hugs” to their own grandparents, and to other elderly whom they “adopted” as grandparents for the sake of bringing them a bit of cheer.

Now, the department is encouraging young people throughout the globe to take it a step further, and to “send a message to the elderly and to receive in return the gift of their wisdom.”

Promoted on social media under the hashtag, “#aGiftOfWisdom,” the campaign encourages youth to publish “wise words” from their grandparents or other elderly people to social media, whether it be a piece of advice their received, a memory, or a “gift of wisdom” given to them from the elderly they have been in contact with in the months since the July campaign was launched.

“Unfortunately, in many cases, because of the health regulations in force, visiting can only take place remotely, via telephone, video calls, and messaging. But it is possible to participate in this campaign by posting the wise words of grandparents and the elderly,” the Vatican office said.

The campaigns come at a time when elderly are increasingly at risk not only of contracting COVID-19, but from the isolation brought by long periods of lockdown.

So far, nearly 100,000 residents in long-term care facilities have died as a result of the coronavirus in the United States alone.

According to the Associated Press, alongside these COVID-fatalities have been a separate wave of deaths in rest homes with patients who did not have COVID-19, but who died because overburdened staff were unable to provide them the care they needed.

Published Nov. 19, the report found that in some cases, nursing homes were so overloaded that some residents were left in soiled diapers so long that their skin began to peel off, while others developed bed sores which “cut to the bone,” while still others died as a result of starvation or dehydration because there were not enough staff to ensure patients were eating or drinking the right amounts.

In some cases, elderly people living in care facilities died as a result of what doctors have called a “failure to thrive” due to prolonged isolation.

An AP analysis of the United States’ roughly 15,000 care facilities found that for every two patients who have died from COVID-19, there has been another who died prematurely of other causes since the pandemic began. According to the report, the “excess deaths” beyond the regular coronavirus fatality rate could amount to as many as 40,000 since March.

In Italy, the government in September announced the creation of a commission dedicated to caring for the elderly, who make up roughly 60 percent of the country’s population. Italian Archbishop Vincenzo Paglia, president of the Pontifical Academy for Life, was tapped to lead the body.

Speaking after the announcement of the new commission, Paglia said that one of his primary goals would be to reform Italy’s system of elderly care, shifting to an at-home approach, rather than depending on institutions.

Much of the commission’s work, he said, will involve “rethinking the framework of care…involving families and administrations so that the elderly can stay in the places where they have lived for the last part of their lives, developing a whole series of healthcare initiatives,” including telemedicine, a better nursing system, and more practical housing designs.

Similarly, Marco Impagliazzo, president of the Italian community of Sant’Egidio, which runs numerous projects with the elderly, has insisted on the need to rethink elderly care.

In a letter published Nov. 6, Impagliazzo stressed the need “to protect the elderly, but not isolate them.”

“Too many elderly have suffered from the pathology of abandonment, which only aggravates their health,” he said, noting that during the first wave of the coronavirus in the spring, nearly half of the elderly who died lived in retirement homes or other care facilities.

This data, Impagliazzo said, “tells us that urgent action is needed to overcome the pathology of isolation. Let us turn this emergency into an occasion to rethink the care and assistance system, which we owe to our elderly.”

He offered numerous suggestions to this end, including a guarantee for relatives and friends to have information on the people living in assisted are facilities; revamping communications systems within nursing homes, as most are unable to facilitate video calls; allowing the elderly to receive visitors provided that the guests undergo a coronavirus test; and incentivizing cohousing or other programs which encourage home care as opposed to institutionalization.

A recent report from the BBC evaluating the reasons why the coronavirus has been less deadly in Africa found the low fatality rate is due in part to demographics and Africa’s overall traditionally minded culture.

Home to the world’s youngest population, Africa has a median age of 19, with just 3 percent of the population over 65, whereas Europe, North America and wealthier Asian nations have a much larger elderly population.

Whereas care facilities have become a driving force behind transmission rates in western countries, this is not the case in Africa, where elderly are largely cared for by their families, and where elderly people when they retire for the most part return to their rural homes in areas with a small population, meaning social distancing is easier.

Quoting a speech from Pope Francis to young people for the celebration of the 32nd World Youth Day, the Vatican’s Laity, Family and Life department insisted that youth “need the wisdom and the vision of the elderly.”

“They will speak to you of things that can thrill your minds and fill your hearts,” they said, noting that some of the posts shared with the campaign hashtag will be posted to the Laity, Family and Life department’s social media accounts.